Whether maneuvering about under their own power, or being pushed and pulled by the surrounding tissue, cells both give and receive mechanical force. The newest addition to Rockefeller University’s faculty, Gregory Alushin, is a biophysicist who investigates how cells use their structural filaments to sense and respond to such forces. 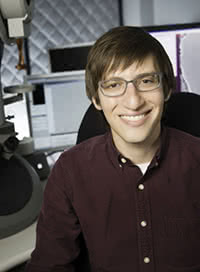 Alushin will join Rockefeller early next year as a tenure-track assistant professor and head of laboratory. He is currently an Early Independent Scientist at the NIH’s National Heart, Lung, and Blood Institute (NHLBI).

“Mechanical forces can influence cells’ behavior and their identity, with implications for normal development and for disease,” Alushin says. “My research explores how the proteins within one type of cellular filament change shape in response to these forces, and what that means for the cell.”

A cell’s so-called cytoskeleton is composed of filaments, which are made up of repeating protein subunits. These filaments form networks that give a cell internal structure and enable it to move. Different types of filaments have distinct roles. For instance, hollow, relatively large microtubules drive cell division by separating duplicated sets of genetic material. Meanwhile, finer, more flexible actin filaments make it possible for the cell to move and contract, working in concert with molecular motors. Alushin’s doctoral work focused on microtubules; his current research examines the actin cytoskeleton.

In order to study the behavior of these tiny structures, Alushin has developed expertise in cryo-electron microscopy, a technique that makes it possible to determine the three-dimensional structure of molecules in atomic detail.

As a graduate student in Eva Nogales’s lab at the University of California, Berkeley, he and his colleagues used cryo-electron microscopy to generate what were, at the time, the highest resolution images of microtubule structures. His work also linked dynamic changes in microtubules’ length with their consumption of chemical fuel, and examined the attachment by which they move chromosomes during cell division.

Alushin shifted his focus to actin during a brief postdoc with Clare Waterman at NHLBI. In 2013, he received an NIH Director’s Early Independence Award, the first such award at NHLBI. The accompanying promotion allowed him to start his own laboratory.

After relocating to Rockefeller, Alushin plans to continue the work he undertook in his NHLBI lab: examining the actin cytoskeleton’s response to forces generated by the cell’s own movement, or from blood flow or other outside forces pushing on it. He suspects that actin proteins change shape in response, and that the cell gathers information about the forces it is experiencing—whether generated internally or externally—when other molecules read these physical changes in the actin protein subunits.

To test this hypothesis, he is developing new techniques aimed at harnessing the power of cryo-electron microscopy to detect these shifts in actin proteins. “Right now there is no good way to investigate how molecules change their structure in response to pushing or pulling forces,” Alushin says. “Our goal is to develop an approach that makes it possible to visualize the shape changes occurring within an actin filament while molecular motors are tugging on it.”

Other goals of his lab are to identify the sensor molecules that may be reading the changes in actin, as well as to examine how actin filaments interact with the many proteins that bind to them.

His results will likely help scientists better understand cellular behavior. Mechanical forces, generated as a result of contact between objects, can prompt changes to cells themselves. “There appears to be a poorly understood mechanical layer to signaling within a cell, which appears to play a crucial role in fine-tuning conventional chemical signaling,” Alushin says.

In relatively short order, changes in actin networks, for example, can prompt a cell to migrate, something that happens normally during development or as part of metastasis in cancer. In fact, tumors are stiffer than the tissue around them, which can enhance their cells’ tendency to metastasize. Longer-term exposure to mechanical forces can affect the expression of genes. For instance, stem cells tend to differentiate toward a fate that mimics the stiffness of the environment in which they are grown, whether soft like brain or rigid like bone.

“Greg’s plans to address problems in basic cell biology are especially well suited to Rockefeller’s scientific environment, and the research he will conduct here is likely to yield insights with important medical implications,” says Marc Tessier-Lavigne, the university’s president. “What’s more, his long-standing interest in pushing the boundaries of cryo-electron microscopy will make him a valuable new member of the team already working to make the most of our recent investment in this technology.”