Lewis Thomas Prize to be awarded to Sean B. Carroll

Evolutionary biologist, educator, and author Sean B. Carroll will be presented with The Rockefeller University’s Lewis Thomas Prize for Writing about Science at a ceremony on March 14. The award recognizes Carroll’s body of work, including his 2013 book Brave Genius: A Scientist, A Philosopher, and Their Daring Adventures from the French Resistance to the Nobel Prize. 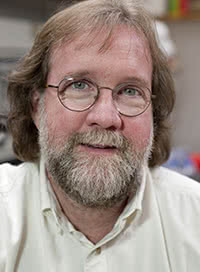 Originally called the Lewis Thomas Prize for the Scientist as Poet, the award was established in 1993 by the university’s Board of Trustees to honor “the rare individual who bridges the worlds of science and the humanities—whose voice and vision can tell us about science’s aesthetic and philosophical dimensions, providing not merely new information but cause for reflection, even revelation.” The award is named after its first recipient, noted physician-scientist and essayist Lewis Thomas.

Carroll, who is vice president for science education at the Howard Hughes Medical Institute and professor of molecular biology and genetics at the University of Wisconsin-Madison, has played a major role in building the field of evolutionary developmental biology, known colloquially as evo-devo. His research focuses on the genes that control animal body patterns and affect the evolution of animal diversity.

Carroll’s 2005 book, Endless Forms Most Beautiful: The New Science of Evo Devo and the Making of the Animal Kingdom, offers a framework of the then-emerging field. He has written several other books, including Remarkable Creatures: Epic Adventures in the Search for the Origins of Species, which was a 2009 National Book Award finalist, and 2013’s Brave Genius.

Brave Genius tells the overlapping stories of Jacques Monod, a co-founder of molecular biology, and his eventual friend, the French novelist Albert Camus. Both were involved in the French Resistance during World War II, and they each went on to win the Nobel Prize in their respective fields. And both men grappled with fundamental philosophical problems.

“It’s a brave book. It takes on major lives and hard problems in biology, as well as sensitive and difficult philosophical and historical issues,” says Jesse Ausubel, director of the Program for the Human Environment and chairman of the selection committee. “The book is an ambitious endeavor, and Carroll succeeds. How many true books about science include a coded message from occupied Hungary written in invisible starch solution on the inside of a record album to be revealed by exposure to iodine?”

Carroll’s newest book, The Serengeti Rules: The Quest to Discover How Life Works and Why It Matters, which addresses essential questions about the rules regulating life in the natural world, will be released in March.

Carroll’s work as a science communicator embodies the prize’s original intent to honor those who inspire others. In addition to his writing, Carroll is a skilled public speaker and has made frequent appearances in the media, often to discuss new findings in evolutionary science. He created the Howard Hughes Medical Institute’s science filmmaking initiative and has been the host or executive producer of more than a dozen films.

Carroll earned his bachelor’s degree from Washington University in St. Louis and completed his doctorate at Tufts Medical School. He did his postdoctoral research at the University of Colorado-Boulder and received an honorary Doctor of Science degree from the University of Minnesota in 2009. He was awarded the Benjamin Franklin Medal in Life Sciences and is a member of the National Academy of Sciences. Carroll is also a fellow of both the American Academy of Arts and Sciences and the American Association for the Advancement of Science.

Other recent winners of the Lewis Thomas Prize include neurologist Oliver Sacks, research physiologist Frances Ashcroft, surgeon Atul Gawande, and mathematicians Steven Strogatz and Ian Stewart. A reception will be held at 5:30 p.m. on Monday, March 14, in the Abby Aldrich Rockefeller Lounge, followed at 6:30 p.m. by the prize presentation and a lecture by Carroll in Caspary Auditorium. The evening’s events are open to the public.