Initial work on the project will rehabilitate the seawall that supports the esplanade, spanning from midway between 63rd and 64th Street to 68th Street. The scope of the work includes repairing eroded joints between the blocks, replacing damaged, displaced, and missing blocks, and repairing eroded concrete. Refurbishment of the esplanade itself, to begin after the repair work, will improve landscaping, add new seating and lighting, create a designated bike line, and construct a noise barrier along the FDR Drive to reduce traffic sound. The university is spending approximately $8 million on the seawall repairs and esplanade improvements, and will also create a $1 million endowment to maintain the landscaping of this section of the esplanade in perpetuity. 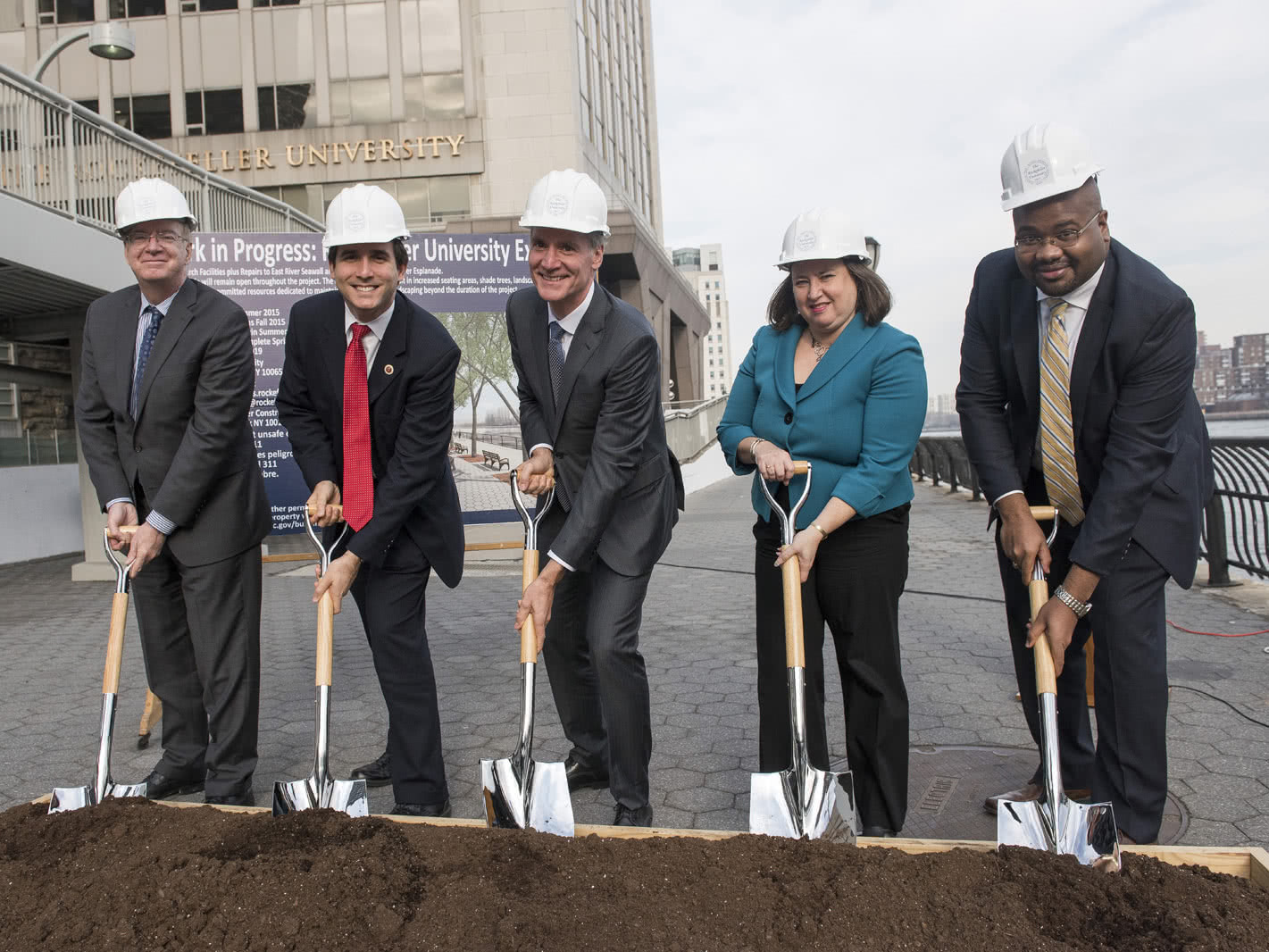 Breaking ground: (From left to right) Bill Castro, Benjamin Kallos, Marc Tessier-Lavigne, Minna Elias, and Matthew Washington celebrate as the project to repair the seawall near Rockefeller and to revitalize the East River Esplanade commences.

These public improvements are part of a $400 million construction project that will add 160,000 square feet of modern, modular lab space to replace the research university’s aging facilities. It will also include a green, landscaped roof that will add two acres to the university’s existing 14-acre campus. The building, named the Marie-Josée and Henry R. Kravis Research Building, will be the centerpiece of the new Stavros Niarchos Foundation–David Rockefeller River Campus.

Throughout the planning phases of the project, Rockefeller has worked in conjunction with its neighbors and local government officials, including Kallos, Brewer, Community Board 8, and representatives from the Parks Department in a collaborative process designed to ensure the public enhancements meet the needs of the community. The terms of the agreement for the partnership are memorialized in a letter the university sent to Kallos as part of the City Council’s approval of the expansion project.

The university has also made a $150,000 gift to Friends of the East River Esplanade, a grass-roots conservancy dedicated to the restoration and renovation of the full length of the esplanade from 60th to 120th Streets.

“Rockefeller is committed to making improvements that benefit the community, and we are thrilled to have the opportunity to renew this important public amenity,” says Tessier-Lavigne. “We believe that this park has the potential to be much more than a jogging and biking path. With this construction, the esplanade will become peaceful setting in which to stroll and sit, to admire the waterfront views, and to watch the sailboats, tugs, and yachts of a busy waterway.” 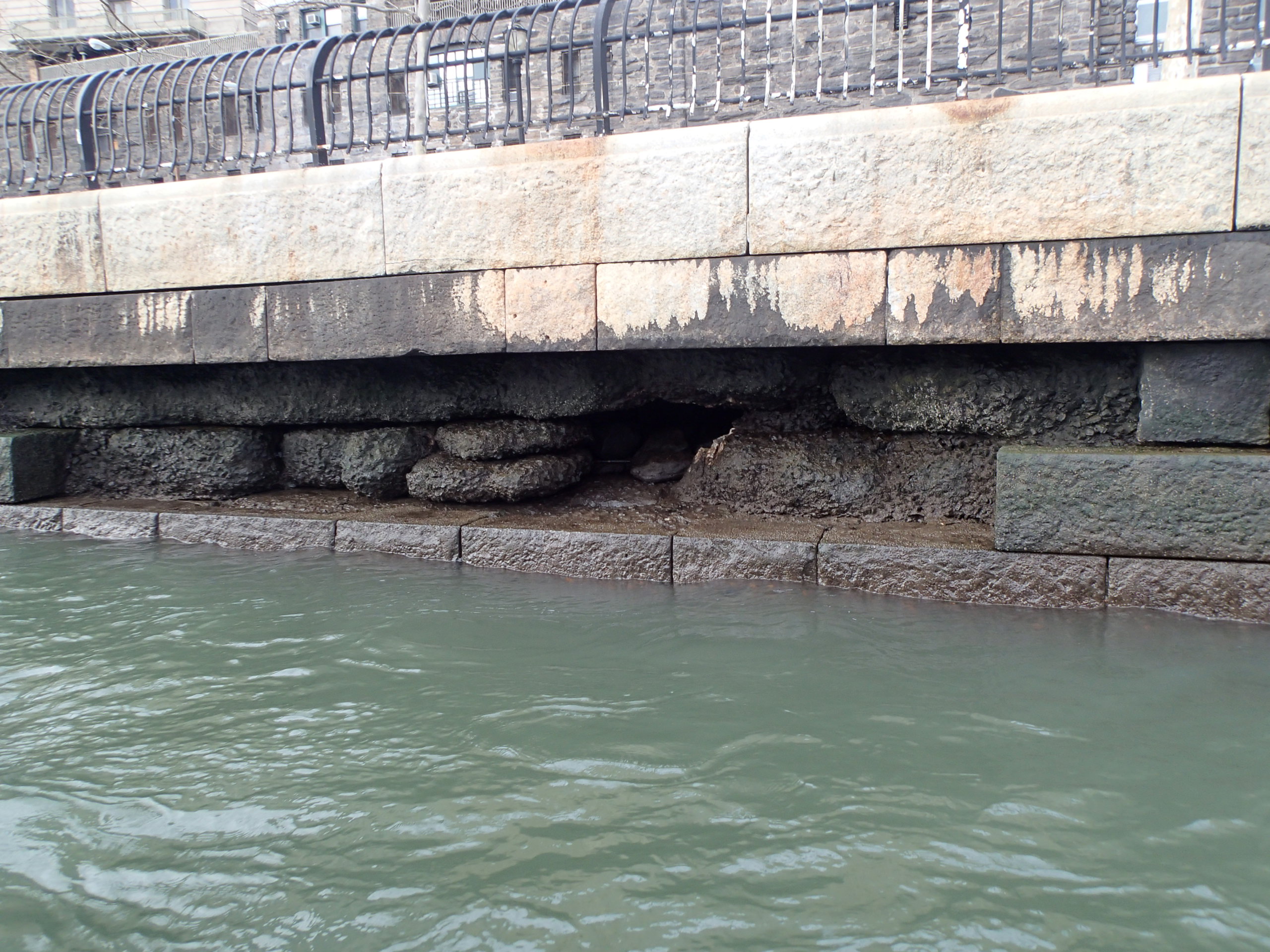 East River seawall: Damaged by hurricane Sandy in 2012, the East River’s seawall near Rockefeller will be repaired as part of the university’s campus extension project.

“We all know that much of the East River Esplanade is in desperate need of repair and improvement,” says Congresswoman Maloney, who represents New York’s 12th district. “In an area, starving for green and open spaces, the esplanade has deteriorated into a badly neglected wasteland with enormous potential to offer much more to the community. Now, thanks to Rockefeller University, the stretch of esplanade between 63rd and 68th streets will see massive improvements.”

“NYC Parks is excited to embark on the construction of the East River Esplanade with the support of Rockefeller University and Council Member Ben Kallos,” says Commissioner Silver. “Our administration prides itself in being able to provide exceptional and sustainable public spaces to New Yorkers across the city, and I have no doubt, that when this project is completed, residents and neighbors of the surrounding communities will be proud stewards of this space and give it the utmost care.”

The temporary certificate of occupancy from the New York City Department of Buildings is a close-to-last step in the expansion of the university’s campus over the FDR Drive.

Launched in 2011, the university’s Campaign for Transforming Biomedicine has raised $1.059 billion as of September 30 this year.