As mentioned, the Pfaff lab historically has focused on steroid hormones’ influences on the brain. Steroid hormone action brings together the relatively simple chemistry of the steroids themselves with the highly developed molecular investigation of hormone receptors as ligand-activated transcription factors.  In four distinct steps, previous work in our lab has shown how specific chemicals, the steroid hormones, act in certain parts of the brain to direct natural, instinctive behaviors.

First, he discovered in rodents the exact cellular targets in the hypothalamus and ancient limbic forebrain for steroid hormones. This report opened the door for his later discoveries of similar sex hormone receptor systems in species ranging from fish to primates (summarized, Harvard University Press, 2017) .

Taken together, the results spelling out the development, the mechanisms and the function of hormone-dependent female reproductive behavior satisfy the criteria spelled out by Nobel laureate Nicolaas Tinbergen for saying that a mammalian behavior is understood,  that as a scientific problem, it is solved. 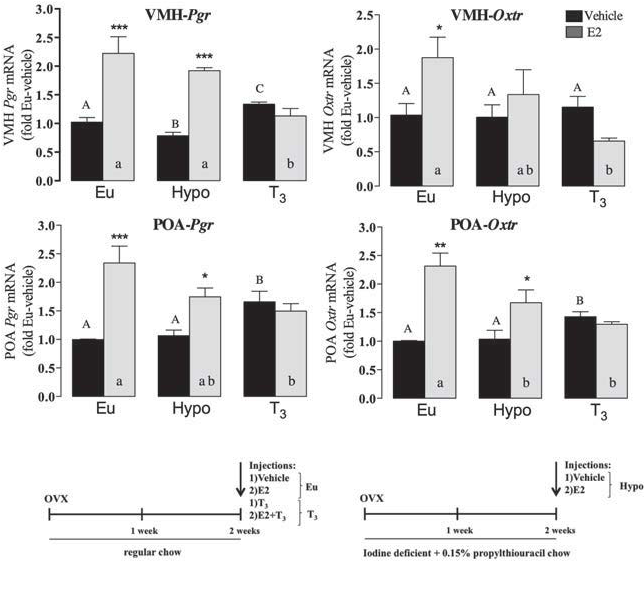 Figure 1: In the ventromedial nucleus of the hypothalams (VMH) and the preoptic area (POA) the estrogen estradiol (E2) turns on transcription from the progesterone receptor gene (Pgr) and the oxytocin receptor gene (Oxtr). While the full study looked at interactions with thyroid hormone status, the most important result for this description came with normal mice (euthyroid, Eu).

With this social behavior’s mechanisms ready for further analyses, two areas of new work come to mind. First, if we can learn enough from the accomplishments and techniques of the Roeder lab, then we could detail further the chain of cell nuclear events which actually carry out hormone-dependent transcription (see Figure 1).  Second, as pioneered by the Allis lab, from whom we learn a lot, the initiation of transcription can be either facilitated or repressed by chemical modification of histone proteins which comprise the chromatin. Encouraged by the type of results in Figure 2, we think the appropriate collaborations would permit new epigenetic questions to be asked, of the hypothalamic neurons in question. 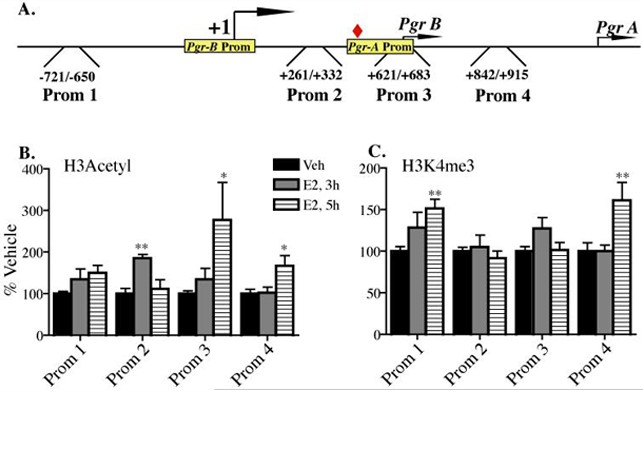 Figure 2: The estrogen estradiol (E2) significantly elevated the amount of acetylated Histone 3 over one specific segment of the promoter of the progesterone receptor gene. A different modification, a trimethylation on Histone 3, had a different pattern of response.