The Marie-Josée and Henry R. Kravis Foundation provides landmark gift of $100 Million to The Rockefeller University

Marc Tessier-Lavigne, president of The Rockefeller University, today announced a leadership gift of $100 million from The Marie-Josée and Henry R. Kravis Foundation to help create a new laboratory building that will be the centerpiece of the University’s major planned campus extension. The Marie-Josée and Henry R. Kravis Research Building, two stories high, will be constructed over the FDR Drive, spanning approximately three city blocks following the shoreline of the East River. Overall, the campus extension project will be four city blocks in length and will add two acres to the University’s current 14-acre footprint.

“We are deeply grateful for the extraordinary generosity of these two remarkable philanthropists,” Dr. Tessier-Lavigne said. “The Marie-Josée and Henry R. Kravis Research Building will help us stay at the cutting edge of scientific discovery and enable us to continue to recruit top faculty by providing them with the facilities they need to make transformative discoveries.” 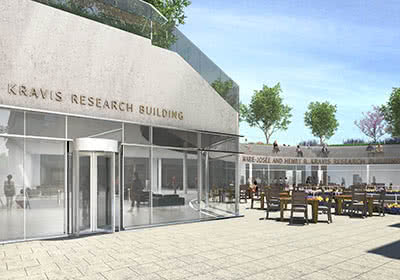 Designed by Rafael Viñoly Architects, the innovative Kravis Research Building will house state-of-the-art laboratory space for Rockefeller’s scientific and educational programs. Unique features of the design include an open plan that will provide a high degree of flexibility to accommodate the changing needs of research over time.

“Henry and I are thrilled to help advance the kind of paradigm-changing discoveries that Rockefeller is known for and that will improve human health,” said Marie-Josée Kravis. “The new building and its laboratories will enable the University’s scientists to continue to push the boundaries of biomedical knowledge in important and exciting ways.”

“The Rockefeller University is unique in that it attracts the best scientists from around the world and gives them the freedom and support to tackle the biggest questions in science,” said Henry R. Kravis, who serves as a vice chair of the University’s Board of Trustees. “Another hallmark of the University is its interdisciplinary and collaborative culture. These new laboratories have been designed to enable scientists to work seamlessly with colleagues both within and beyond their fields.”

“Since its inception, the mission of The Rockefeller University has remained unchanged—to conduct science that will benefit humanity,” said Russell L. Carson, chair of the University’s Board of Trustees. “The philanthropic vision shown by Marie-Josée and Henry Kravis serves as an inspiration to all of us and will help to ensure that the University and its scientists will remain leaders in biomedical discovery, today and tomorrow.”

“In so many areas of biomedical science, we are making great strides in our understanding of health and disease,” said Dr. Tessier-Lavigne. “Investigations in genetics, neuroscience, immunology, and molecular and cell biology are yielding new strategies for the treatment of major diseases. Among these are cancer in its many forms, Alzheimer’s disease and other neurodegenerative diseases, obesity and metabolic diseases, and infectious diseases such as HIV/AIDS, to cite just a few examples.”

Dr. Tessier-Lavigne added: “Rockefeller scientists working in the laboratories of the Marie-Josée and Henry R. Kravis Research Building will have the tools at their disposal to continue to advance the frontiers of knowledge. Additionally, the graduate students and postdocs who will become tomorrow’s scientific leaders will train in Kravis Research Building laboratories.”

The Stavros Niarchos Foundation–David Rockefeller River Campus will house several new buildings in addition to the Kravis Research Building, including a dining commons, an academic center, and a conference center. Associated gardens and other amenities will further enrich the University’s highly collaborative research environment. As part of the project, the University will also improve and beautify the public esplanade adjacent to the campus for the benefit of the greater New York City community, and make major repairs to the seawall along the East River. Video overviews of the Kravis Research Building and the Stavros Niarchos Foundation–David Rockefeller River Campus, along with architectural renderings, can be viewed at: rivercampus.rockefeller.edu.