Marc Tessier-Lavigne, president of The Rockefeller University, today announced two leadership pledges of $75 million each from the Stavros Niarchos Foundation and David Rockefeller to launch a major extension of the University’s campus on the East River. 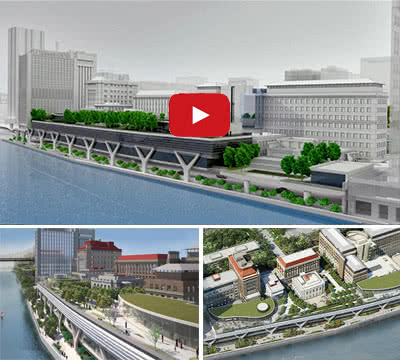 An architect’s rendering depicts a two-acre extension to The Rockfeller University campus to be known as the Stavros Niarchos Foundation–David Rockefeller River Campus. Built over the FDR drive, the extension will be the site of new buildings containing bioscience laboratories and other facilities. (Images by Rafael Viñoly Architects)

Designed by Rafael Viñoly Architects, the project will add two acres to the existing 14 acres of the campus by building over the FDR East River Drive, enabling the creation of several new buildings with state-of-the-art laboratories, administrative space, a conference facility, a dining commons, and an outdoor amphitheater. The new campus will renew the University’s laboratory stock, foster greater scientific collaboration both within and beyond the University, and provide new venues for public programs to advance the dissemination of science to a broader audience. As part of the project, the University will also improve and beautify the public esplanade adjacent to the campus for the benefit of the greater New York City community, and make major repairs to the seawall along the river.

“Stavros Niarchos and David Rockefeller were close friends and legendary business partners for over half a century,” said Andreas C. Dracopoulos, great nephew of the late Stavros Niarchos, co-president of the Stavros Niarchos Foundation and a member of the University’s Board of Trustees. “They did well together in the twentieth century, and now they’re joining forces again to do good in the twenty-first. Under Marc Tessier-Lavigne’s visionary leadership, Rockefeller University is at the forefront of biomedical research. This support is an investment in society’s future well-being.”

“More than a century ago, my grandfather founded what is now The Rockefeller University to pursue science for the benefit of humanity,” said David Rockefeller, who has served as a trustee of the University since 1940. “Since then, the discoveries of the University’s many renowned scientists have dramatically advanced knowledge, saved countless lives and improved health worldwide. I am honored to join with the Stavros Niarchos Foundation in strengthening this great organization in the critically important work it does.”

“We are deeply grateful to the Stavros Niarchos Foundation and David Rockefeller for enabling this transformative project, which will ensure the strength of the University’s scientific and educational programs for decades to come,” said Russell L. Carson, chair of the University’s Board of Trustees. “These two extraordinary pledges put us on the path to establishing a new campus that will enable our researchers to remain at the forefront in today’s golden age of scientific discovery.”

Dr. Tessier-Lavigne added, “Thanks to recent technological advances, a revolution is under way in genetics, brain science, biological imaging, cancer biology and immunotherapy, to name just a few fields that are being transformed. We now have the power to answer fundamental questions about the body in health and in disease that were beyond our reach just a few years ago. The Stavros Niarchos Foundation–David Rockefeller River Campus will bring leading scientists together and provide them with the resources to make breakthrough discoveries.”

“We are tremendously appreciative of these leaders for their essential support,” Dr. Tessier-Lavigne said. “We are also especially grateful to our council member, Ben Kallos, for his active partnership in shaping the new campus for the benefit of both The Rockefeller University and the New York City community more broadly.”

About the Stavros Niarchos Foundation

The Stavros Niarchos Foundation is one of the world’s leading private international philanthropic organizations, making grants in the areas of arts and culture, education, health and sports, and social welfare. The Foundation funds organizations and projects that are expected to achieve a broad, lasting and positive impact for society at large, and exhibit strong leadership and sound management. The Foundation also seeks actively to support projects that facilitate the formation of public-private partnerships as an effective means for serving public welfare.

From 1996 until today, the Stavros Niarchos Foundation has made grant commitments of $1.49 billion / €1.13 billion, through 2,809 grants to nonprofit organizations in 111 nations around the world.

In 2012 and 2013, the Foundation announced two new initiatives of €100,000,000 ($130 million) each, to help the efforts to address the crisis in Greece. While the initiative in 2012, which has been completed, aimed to provide immediate relief against the adverse effects of the deepening crisis, the one in 2013 aims to address the high percentage of youth unemployment, seeking to create better employment prospects and new opportunities for the young.

The Foundation’s largest single gift ($796 million / €566 million) is the Stavros Niarchos Foundation Cultural Center (SNFCC), in Athens, which is expected to be completed in 2016. The project, designed by Renzo Piano, includes the new facilities of the National Library of Greece, and of the Greek National Opera, as well as the Stavros Niarchos Park. The SNFCC is a testament and a commitment to the country’s future. It is also an engine of short- to mid-term economic stimulus.

Mr. Rockefeller has wide-ranging interests and involvement in the fields of international relations and civic affairs. He served as Chairman of the Council on Foreign Relations from 1970 to 1985 and now chairs its International Advisory Board. He was instrumental in creating the International Executive Service Corps, a nonprofit organization that sent volunteer experts to developing nations to provide technical and managerial assistance to private enterprise. He helped to found the Trilateral Commission in 1973 and in 1991 stepped down as its North American Chairman, now serving as Honorary Chairman. In 1979, he co-founded the New York City Partnership, which is dedicated to economic development and effective governance in New York City through private-public partnerships.

He is Honorary Chairman of the Americas Society and its affiliate, the Council of the Americas, an organization which he founded to promote closer inter-American cooperation, both on a business and cultural level, as well as better communication between the public and private sectors. He served as Chairman from 1981 through 1992.

Mr. Rockefeller is the former Chairman of The Museum of Modern Art and continues as Chairman Emeritus and Life Trustee.