Two Rockefeller University scientists are among 11 winners of the first annual Breakthrough Prize in Life Sciences, an award established by six tech entrepreneurs dedicated to advancing breakthrough research. At $3 million each, the prizes are worth more than twice the amount of the Nobel. 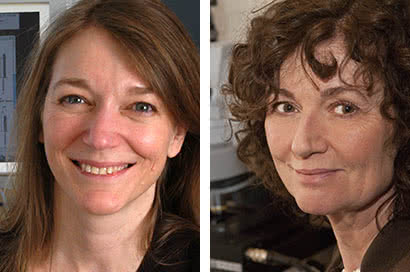 Bargmann is being recognized for her work on the genetics of neural circuits and behavior, and synaptic guidepost molecules. She studies the relationships between genes, the nervous system and behaviors in the roundworm C. elegans, a powerful model system for the analysis of neural circuits. Her lab has identified genes and neural pathways for its actions and has determined how sensory inputs regulate those circuits.

de Lange is being recognized for research on telomeres, illuminating how they protect chromosome ends and their role in genome instability in cancer. A native of the Netherlands, de Lange identified a protein complex at telomeres, called shelterin, and has shown how this complex hides the chromosome end from the cellular machinery that detects and repairs broken DNA ends. Telomeres undergo erosion in the early stages of cancer development and de Lange’s work has clarified how the loss of telomere function generates genome instability and can drive cancer progression.

The Breakthrough Prize in Life Sciences recognizes excellence in research aimed at curing intractable diseases and extended human life. Administered by a new non-profit organization, the Breakthrough Prize in Life Sciences Foundation, the prize is founded by Art Levinson, chairman of the board of Apple and former CEO of Genentech; Sergey Brin, co-founder of Google Inc.; Anne Wojcicki, co-founder of 23andMe; Mark Zuckerberg, founder and CEO of Facebook, and his wife Pricilla Chan; and Yuri Milner, founder of the Russian internet company Mail.ru.

“The Breakthrough Prizes are a spectacular recognition of Cori’s and Titia’s work,” says Marc Tessier-Lavigne, the university’s president. “The high-profile awards not only bring recognition to their scientific accomplishments, but they raise the profile of life sciences nationally and reflect greatly on Rockefeller’s commitment to breakthrough science. I’m thrilled to be able to congratulate Cori and Titia on this important honor.”

The Breakthrough awards are to be awarded annually for past achievements in the field of life sciences, with the aim of providing the recipients with more freedom and opportunity to pursue even greater future accomplishments. Going forward, each year’s prize winners will join the Selection Committee for future awardees. The Prize will be awarded via a transparent selection process, in which anyone will be able to nominate a candidate for consideration by filling out an online form. The prize can be shared between any number of deserving scientists; there are no age restrictions and the award can even be received more than once.

Prize recipients will be invited to present public talks targeting a general audience, to be made available to the public online.