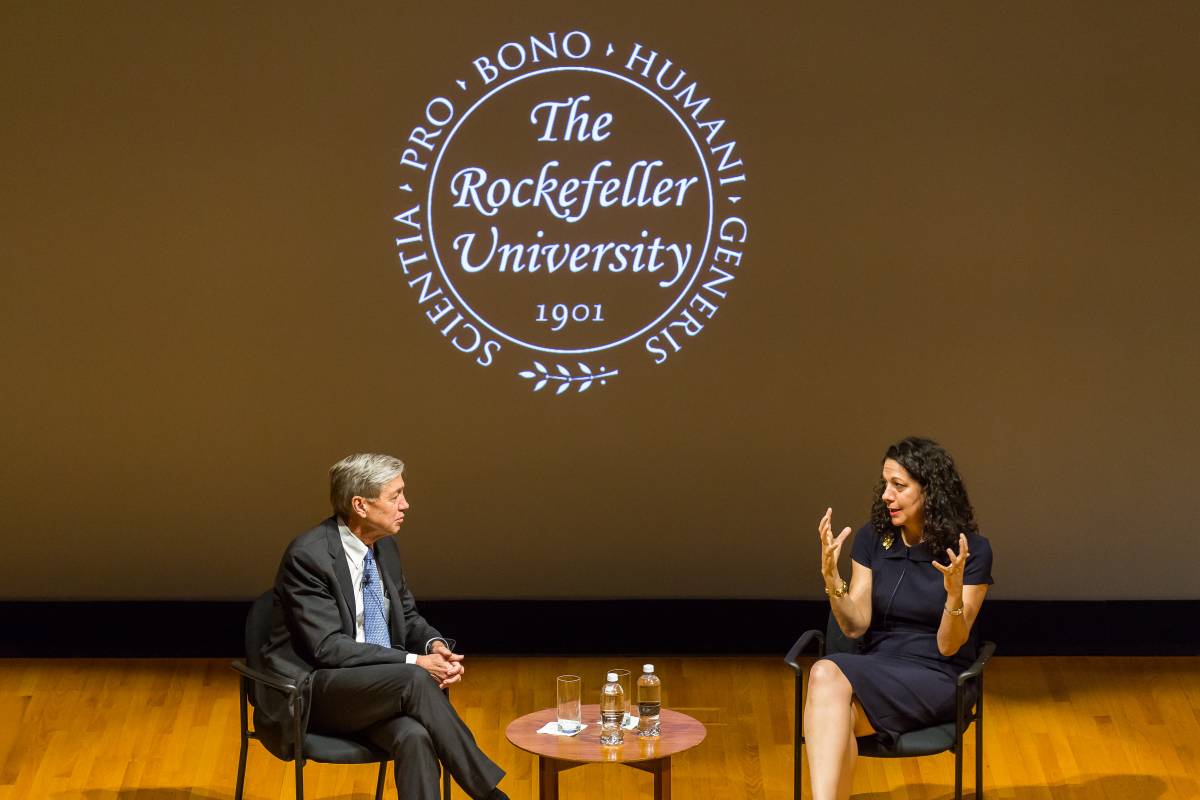 For hundreds of years, bacteria were thought of as reclusive, antisocial organisms. But molecular biologist Bonnie Bassler, known to some as the “Bacteria Whisperer,” discovered that these single-celled creatures actually talk to one another and collaborate by using a communication mechanism known as quorum sensing. Last month Dr. Bassler, who is the Squibb Professor in Molecular Biology at Princeton University, was honored with Rockefeller’s Pearl Meister Greengard Prize for her groundbreaking work.

Now in its 13th year, the Pearl Meister Greengard Prize was established to recognize women who have made major contributions to biomedical science. When Paul Greengard, Vincent Astor Professor and head of the Laboratory of Molecular and Cellular Neuroscience, won the Nobel Prize in Physiology or Medicine in 2000, he used his Nobel honorarium to create the international award together with his wife, sculptor Ursula von Rydingsvard, and other supporters. The prize is named in memory of Dr. Greengard’s mother, who died during his birth.

In her remarks, Dr. Bassler spoke about the death of her own mother during her junior year in college. “Like Pearl Greengard, my mother, Virginia, never got to see what became of her child. She would be proud to know that I became a scientist and delighted to know how lucky and happy I am,” she said. “I accept this award in honor of the women who could not imagine what would become of us and in honor of the women who will come after us and will exceed all our imaginings.”

By studying bioluminescent marine bacteria, Dr. Bassler and her colleagues have elucidated molecular mechanisms that allow bacteria to interact with one other. This chemical communication system, called quorum sensing, enables the microbes to cooperate in numerous ways. Some pathogenic bacteria, for example, can use quorum sensing to amass a population large enough to launch an infectious assault, while the “good” bacteria that inhabit our gut and other organs use the same mechanisms to exert beneficial effects. Work in the Bassler lab is focused on developing ways to manipulate quorum sensing—either by disrupting the process in virulent bacteria or enhancing it in health-promoting strains.

“The notion that bacteria can communicate with one another and can literally count their brethren in a group was once a heretical idea,” said Richard Lifton, the university’s president, who hosted the prize ceremony at Caspary Auditorium. “Bonnie has been a leader in showing how cell-to-cell communication in bacteria regulates gene expression, which in turn governs functions including bioluminescence, virulence, and antibiotic synthesis. Quorum sensing has become an area of truly explosive discovery.”

Reshma Saujani, who is the founder and CEO of Girls Who Code, a nonprofit organization that equips young women with the skills to pursue careers in computer science and other tech fields, presented the prize to Dr. Bassler. “It is so important for the girls in my community to have role models like you, Bonnie, because we can’t dream of what the future looks like unless we see ourselves in you,” Ms. Saujani said. “Thank you for being a role model for countless young female scientists.”

Dr. Bassler graduated from the University of California, Davis, and received her Ph.D. in biochemistry from Johns Hopkins University. In 1994, she joined the faculty at Princeton University, where she is chair of the department of molecular biology. She has received several honors for her work, including a MacArthur Fellowship, the Wiley Prize in Biomedical Sciences, and the Shaw Prize in Life Science and Medicine. Dr. Bassler is a Howard Hughes Medical Institute investigator, a fellow of the American Academy of Arts and Sciences, and a member of the National Academy of Sciences and the National Academy of Medicine.

Winners of the Pearl Meister Greengard Prize, which carries a $100,000 honorarium, are selected by a committee of nine eminent scientists, four of them recipients of the Nobel Prize.

Doudna, a pioneer in the study of RNA, will be given the prize during a ceremony on the Rockefeller campus on Tuesday, October 2.

Stubbe is being recognized for illuminating the processes that drive DNA replication and repair. Her research has led to the development of several cancer therapies.