Remembering a pioneer of chromatin biology 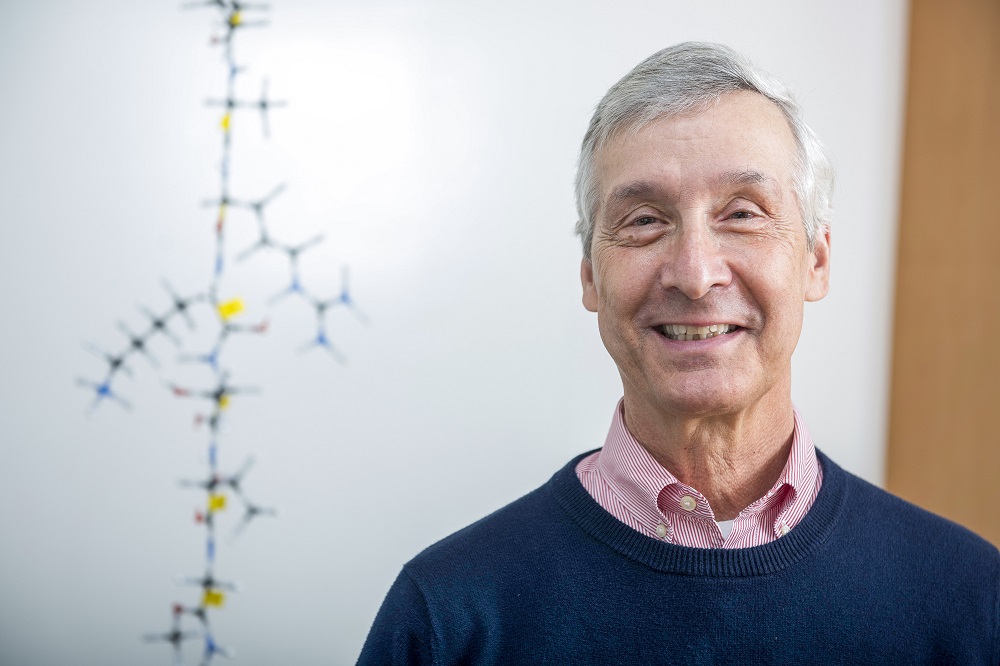 Charles David Allis, a molecular biologist who shaped the field of chromatin biology, died in Seattle, WA, on January 8 at the age of 71. Allis was the Joy and Jack Fishman Professor and head of the Laboratory of Chromatin Biology and Epigenetics at The Rockefeller University.

Allis revolutionized the field by showing that modification of histone proteins, previously thought of as mere spools for packaging DNA in the nucleus of cells of all organisms other than prokaryotes, plays a critical role in turning gene expression on and off. Mutations that disrupt this fundamental process have proved to underlie human diseases ranging from autism and congenital heart disease to diverse cancers.

“Dave transformed our understanding of gene regulation with a discovery whose impact was wholly unanticipated.” says Richard P. Lifton, the Carson family Professor and president of The Rockefeller University. “He showed that the role of specific chemical modifications of particular sites on histone proteins have distinct effects on gene expression. These discoveries have had a profound impact on our fundamental understanding of biology.”

When Allis started graduate school at Indiana University, the standard understanding of the regulation of gene expression was based on the known mechanisms in bacteria: transcription factors promoted or repressed gene expression by directly binding to DNA. In 1974, Roger Kornberg discovered that DNA in other more complex forms of life was wrapped around balls of histone proteins, called nucleosomes. It was recognized that this provided a means for organizing the much longer DNA genomes of these organisms, and it was generally presumed that the nucleosomes were essentially inert packaging material.

But Allis, inspired by earlier work done by Rockefeller biologist Vincent Allfrey, suspected that histones had additional roles. After completing his PhD in 1978, he accepted a postdoctoral position at University of Rochester, where he began studying a single-celled ciliate, Tetrahymena.

Experimenting on such an uncharismatic organism was a choice almost as unpopular as researching histones. But Allis knew what he was doing. Prior studies had proposed the existence of proteins that modify histones by attaching acetyl groups to them, and Allis suspected that such modifications were involved in regulating gene expression. If he was right, histones would no longer be viewed as inert spools, but as active participants in the genome.

Tetrahymena stood out for its high levels of acetylated histones in its micronuclei, where the level of gene expression was very high. If Allis was going to isolate the first histone-modifying protein, this ciliated protozoan was the right place to look. And when he earned his first faculty position at Baylor College of Medicine, Tetrahymena came with him.

“Dave’s major work was in a strange organism, and he was criticized for it,” recalls Robert G. Roeder, the Arnold and Mabel Beckman Professor at Rockefeller. At one time, a reviewer on one of Allis’s grant applications asked why he didn’t just work with “something important.” In hindsight, the discoveries that Allis made in that organism would be among the most important in his field.

In 1996, Allis succeeded in his quest to purify this histone acetyltransferase (HAT), and showed that the enzyme modified a specific site at the end of a histone protein. Upon cloning and sequencing the gene, he discovered that the gene was closely related to the yeast gene Gcn5p, which had previously been identified as a co-activator of gene expression that partnered with a number of transcription factors to activate gene expression without directly binding DNA. Allis showed that the Gcn5p protein also acetylated the tail of the same histone protein.

Coupled with prior work by the lab of Michael Grunstein at UCLA, whose genetic studies also implicated histone modification in the regulation of gene expression, these findings provided  striking evidence clearly implicating specific chemical modifications of histone proteins in gene regulation.

Allis joined the Rockefeller faculty in 2003, a pioneer and thought leader in the rapidly advancing field of chromatin biology. Over the next two decades, he jumped rapidly from one discovery to the next, racking up a vast repertoire of proteins involved in adding, removing, or binding to specific chemical groups at particular sites on histones proteins, thereby tuning the expression of genes up or down.

“Dave knew basically every amino acid in our histones—he had them written out, with all of their tails and modifications on a whiteboard in his office, and this was his bible,” recalls Roeder who was on the faculty committee that recruited Allis to Rockefeller. “He was just so passionate about science. He would always say: ‘Every amino acid matters!’”

Allis’ single-minded dedication continued to bear fruit many years after his groundbreaking discovery. He went on to make many seminal discoveries in the field, which has contributed to the body of knowledge that the addition, removal, and recognition of specific chemical modifications of particular sites in histone proteins promotes activation and repression of specific genes, as well as greater or lesser compaction of chromatin. Work by him and others has made it clear that gene regulation cannot be understood without accounting for histone modifications and other forms of chromatin activity. Moreover, it turned out that the enzymes responsible for creating or “interpreting” histone marks are often mutated in disease, including in many forms of cancer—and Allis was quick to capitalize on the clinical implications of these findings. Importantly, these chemical modifications can persist, providing a cellular memory that sustains the differentiation of cell types.

The critical importance of these mechanisms has become clear from genetic studies of humans and experimental animals in which mutations in these chromatin modifiers result in a wide range of diseases. Moreover, five inhibitors of histone deacetylases have been developed and received FDA approval for treatment of cutaneous and peripheral T-cell lymphomas and multiple myeloma, with more under study.

“Dave was an extremely creative and technically superb biochemist,” Lifton says. “The impact of his work has been truly profound.” Allis was known not only for his rare skill and ingenuity but also his humor, gentle demeanor, and dedication to educating and encouraging the next generation of biochemists. “Dave left such a strong impression. For someone so accomplished, he was also the kindest, most humble, and relentlessly positive person you could imagine,” Lifton says. “He was a wonderful mentor, a spectacular colleague—a remarkable citizen of the scientific community.”

Students and colleagues alike fondly recall how Allis’ humor would routinely brighten the laboratory. “We always joked that he was like a scientific dad to us—complete with the dad jokes,” says Joanna Wysocka, an HHMI investigator and professor at Stanford University who completed her postdoc with Allis in 2006. Wysocka credits Allis with helping launch her career and giving her the confidence to run her own laboratory. “He was absolutely committed to his people and believed that mentorship doesn’t stop when a student leaves his laboratory,” she says. “He supported us, promoted our careers, and created opportunities for us—he was our cheerleader.”

Throughout his storied career, Allis received almost every prize in biomedicine, including the 2022 Albany Medical Center Prize in Medicine and Biomedical Research, the 2018 Albert Lasker Basic Medical Research Award, the 2015 Breakthrough Prize in Life Sciences, the Japan Prize for Life Sciences in 2014, the Lewis S. Rosenstiel Award in 2011, and the Canada Gairdner International award in 2007. He was a member of the National Academy of Sciences, the National Academy of Medicine, the American Academy of Arts and Sciences, and the French Academy of Sciences.

Allis is survived by his wife Barbara, his three children (Laura, Brian, and Mike), two grandchildren (Hannah and Sam), and his sister Cathy.