How a cell's mitochondria make their own protein factories 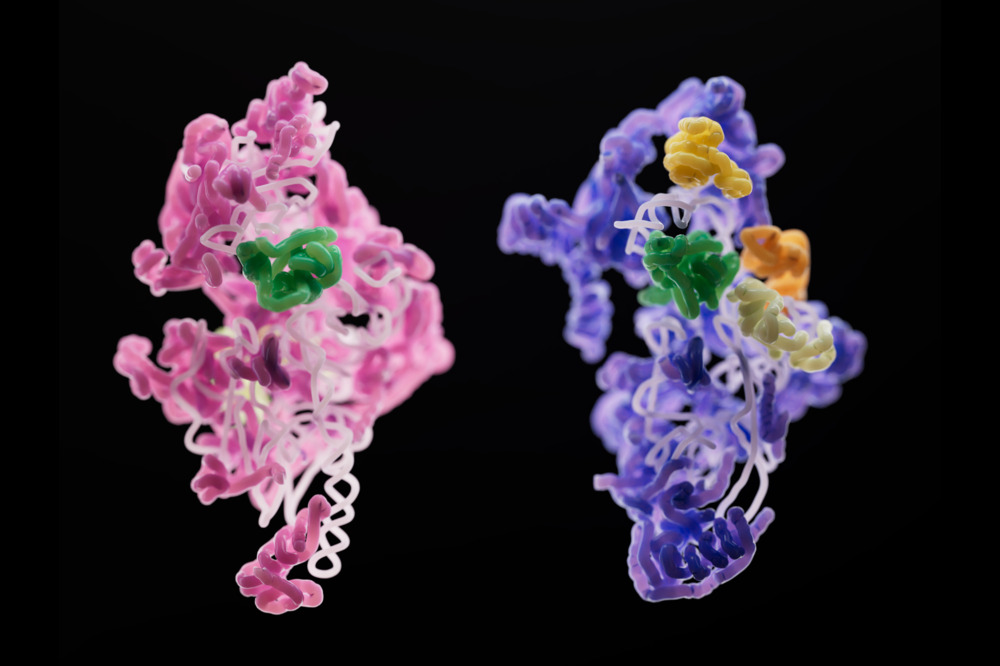 A subunit of a yeast mitoribosome (pink) compared to that of a human mitoribosome (purple). Although different, the two developing subunits have an assembly factor (green) in common. Credit: Sebastian Klinge

Ribosomes, the tiny protein-producing factories within cells, are ubiquitous and look largely identical across the tree of life. Those that keep bacteria chugging along are, structurally, not much different from the ribosomes churning out proteins in our own human cells.

Scientists in the laboratory of Sebastian Klinge wondered how mitoribosomes evolved, how they assemble within the cell, and why their structures are so much less uniform across species. To answer these questions, they used cryo-electron microscopy to generate 3D snapshots of the small subunits of yeast and human mitoribosomes as they were being assembled. Their findings, published in Nature, shed light on the fundamentals of mitoribosome assembly, and may have implications for rare diseases linked to malfunctioning mitoribosomes.

“Three dimensional pictures can tell us a lot about what steps are required, what proteins are involved in the process, and how you might be able to regulate the assembly of these large and complex machines,” says Nathan Harper, a graduate student in Klinge’s lab. “Cryo-EM allowed us to identify and isolate individual stages of the assembly pathway from a heterogeneous population of purified complexes, and we are able to see how these complexes change over time during assembly,” adds Chloe Burnside, also a graduate student in Klinge’s lab.

By observing this process in two different species—yeast and humans—the team managed to directly observe many similarities and differences in mitoribosome assembly. One key distinction: different proteins often were involved in otherwise similar acts of RNA folding. That’s likely because “there are common hurdles for these ribosomes,” Harper explains. “You can think about it like manufacturing two different bikes—a road bike and a mountain bike. You might need additional parts or tools for each one, but some key stages in production will be similar.”

The results provide unique insights into how molecular complexity and diversity arises in macromolecular complexes, and how assembly systems evolve along with the complexes themselves. A better understanding of mitoribosomes may also have implications for a range of severe diseases linked to mitoribosome dysfunction, such as Perrault syndrome. “We were able to map various disease-causing mutations onto different assembly factors’ structures, so that we could see how these mutations could affect the ribosome assembly process.”