From the piano bench to the lab bench 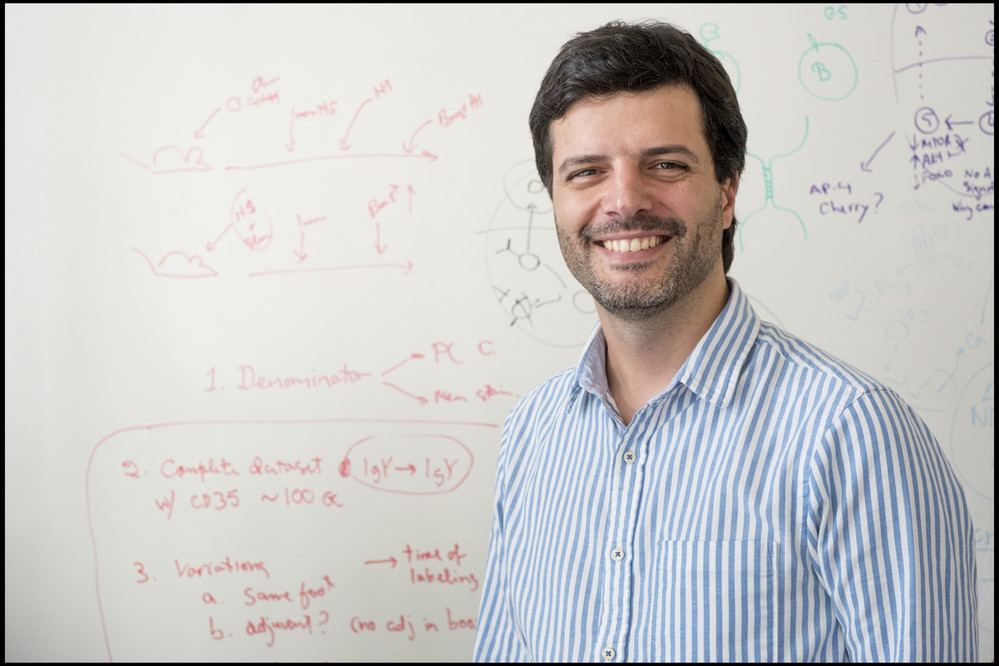 A former concert pianist, Victora pivoted from music to pursue research only later in life, and has since helped clarify the origins of long-term immunity.

In the two centuries since Edward Jenner treated smallpox with history’s first vaccine, inoculation has saved millions of lives and relegated once-deadly diseases to distant memory. But scientists still aren’t sure exactly how immunity acquired from vaccines or exposure to viruses works. Why do some people respond better to certain vaccines, and why do some vaccines provide longer protection than others? Even questions as fundamental as how organisms acquire immunity in the first place are yet to be elucidated in full.

Gabriel D. Victora is an immunologist dedicated to addressing these questions. As head of the Laboratory of Lymphocyte Dynamics at The Rockefeller University, Victora has transformed our understanding of how antibodies are made. His lab has clarified precisely how the body, upon exposure to a virus or vaccine, refines antibody-generating B cells to create long-term immunity—findings with sweeping implications for vaccine development. In recognition of his achievements, Victora was recently promoted to associate professor.

From sheet music to scientific papers

Biomedical research was once the furthest thing from Victora’s mind. A former concert pianist, he pivoted from a career in music to pursue immunology only later in life. “Immunology was kind of an accident,” he recalls. “There was a time when science wasn’t even on my radar. I played piano all the time, and never considered doing anything else.”

Victora grew up in Pelotas, Brazil, and recalls a happy childhood steeped in scholarship. “Everyone in our home was always reading and studying,” he says. His father is the epidemiologist Cesar G. Victora, celebrated for his influential work on childhood nutrition. “I remember my dad filling out his map with pins from all the places he had visited.”

At around age 13, Victora began playing piano, a talent that ran in his family. He remembers how his great-grandmother would bang out a Brazilian tune with such vigor that her hands would turn purple by the grand finale.

Victora graduated with a bachelor’s and master’s in classical piano from the Mannes School of Music in New York City before returning to Brazil to play concerts and teach music for several years. But the life of a professional pianist was not for him. “Keeping concert repertoires ready meant practicing for hours and hours,” he says. “And I didn’t enjoy teaching music either.”

He began translating scientific papers from Portuguese into English for his father’s research group and, later, for medical journals. “I must have translated 500 papers,” he says.

Reading all of those reports stirred in Victora an interest in research, and he began volunteering as a technician at an immunology laboratory at the University of São Paulo. “Every day, I would set up a few hundred PCRs, run a big gel, and compile results,” he says. “The work called to me.”

With the money he had earned translating papers and teaching music, Victora enrolled in a graduate program at the university that would allow him to pursue a master’s in immunology without completing any scientific prerequisites. “They were fine with me being a musician as long as I could pass the tests,” Victora says.

He did more than just ace the quizzes. After completing his master’s, Victora earned his Ph.D. in 2011 from New York University and worked as a fellow at the Whitehead Institute for Biomedical Research at MIT, before joining Rockefeller in 2016.

Victora is married to Angelina Bilate, a research associate at Rockefeller who focuses on T cell biology, whom he initially met while pipetting gels in São Paulo. Their nine-year-old son Fernando is inevitably (and perhaps tragically) steeped in immunology shop talk.

“It’s all he hears about at dinner,” Victora says. “I just hope I can teach him that B cells are cooler than T cells before my wife convinces him otherwise.”

Where B cells better themselves

B cells are at the heart of much of Victora’s work. One key area of focus is the germinal center, a sort of microscopic bootcamp that forms in response to exposure to a pathogen or a vaccine. Through a process known as affinity maturation, germinal centers churn out successively stronger B cells until all that remains are those producing the most potent antibodies.

Victora’s analysis of the inner workings of germinal centers culminated in the strongest evidence to date that affinity maturation is driven by a Darwinian process in which only the hardiest B cells survive. In one line of work, he used multiphoton microscopy to demonstrate how B cell clones compete with one another in a battle of the fittest.

His lab is also looking for ways to use their newly gained understanding of the rules of germinal center selection to predict and influence the outcomes of immunization, which for now remains a guessing game. “Knowing how germinal centers work but not how to predict specific outcomes is like knowing how weather works but not knowing whether or not it’s going to rain,” he says. “We’re now starting to discern patterns that could help us predict B cell behavior in the germinal center, and eventually guide it towards where we want it to go.”

Victora’s research has led to a greater understanding of how immunity develops after vaccination. And since vaccine immunity hinges on affinity maturation, the research may ultimately lead to the development of more effective vaccines. In recognition of these practical implications, Victora was awarded a MacArthur “genius grant” in 2017.

His lab has since continued its work solving the mysteries of germinal centers, including the role T cells play in both promoting and shutting them down, but the group has also dedicated time to developing novel lab techniques. Chief among them is LIPSTIC (Labeling of Immune Partnerships by SorTagging Intercellular Contacts), which allows researchers to study cell-to-cell interactions by following the enzymes that are swapped when two cells touch.

“It’s almost like the T cell has lipstick on it and kisses a B cell,” Victora says. “We can see where the lipstick rubs off and track the interaction, which tells us that signals have been transmitted between these cells.”

The Victora lab is now working on expanding LIPSTIC to help track other cell types so that the technique can be used more efficiently by the broader research community.

Lessons from failure and experimentation

Though it’s now hard to imagine Victora hustling concert gigs, he attributes much of his success in science to his background in music. Absorbing scientific information came easily to him after years of memorizing reams of sheet music, and it was at the piano bench—not the lab bench—where Victora first learned to value perseverance and originality.

“Musicians expect things to fail a lot before they stop failing, and assign intrinsic value to doing things differently than everyone else,” Victora says. “Every paper, I try to do something in an uncommon way and, every experiment, I’m prepared to take something that doesn’t work and repeat it, starting over again and again until it works.”

Even now, when the stress of an experiment or pending paper gets to him, Victora often takes a short break to play piano and clear his mind. The music reminds him of his calling, and the perseverance and originality necessary to upend our understanding of human disease.

“These values are sometimes emphasized more in art than in science,” he says. “In that way, art still influences much of my scientific work.”