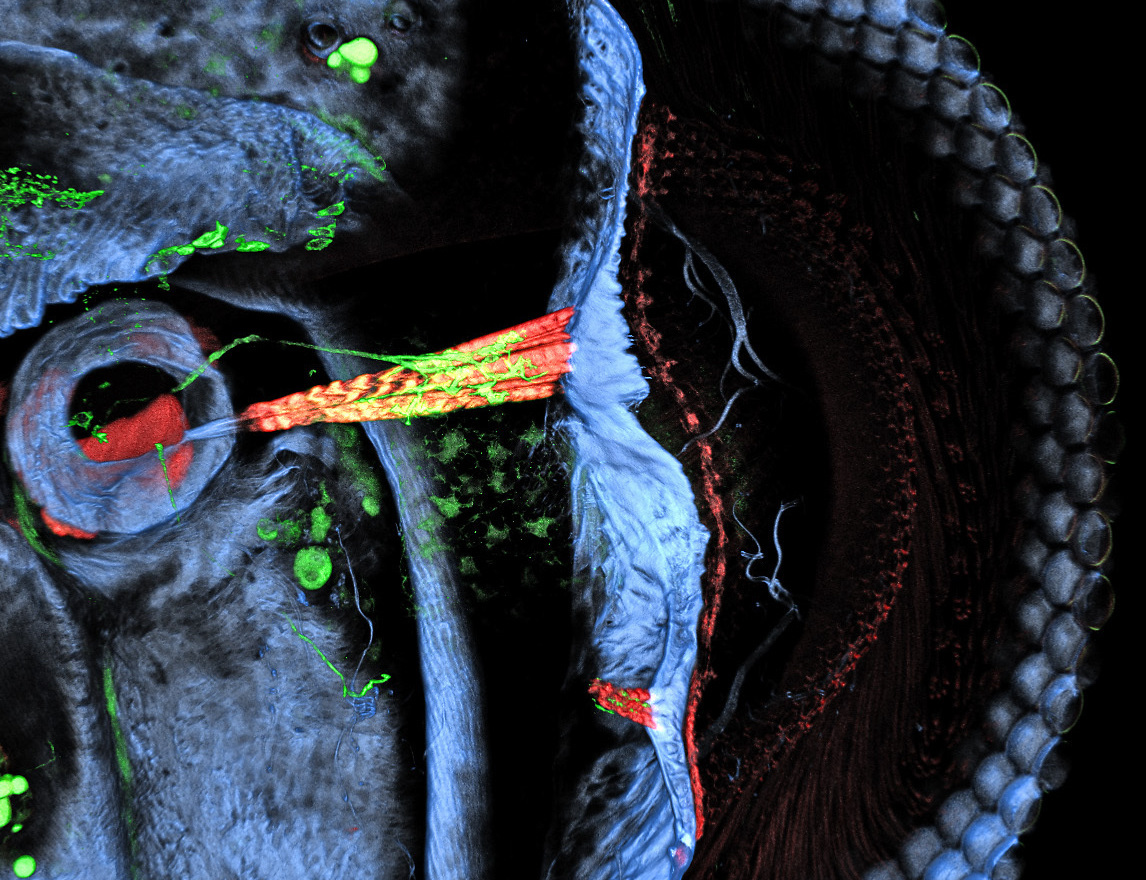 A side view of a fly eye with the rubber-band like retinal muscle in red. The muscle is innervated by a retinal motor neuron (green) that controls retinal movements. (Photo by Igor Siwanowicz)

Pick an object in front of you—a teacup, for example—and fix your gaze on it.  You may think that you’re keeping your eyes still, but you’re not: Your eyes are frequently moving unbeknownst to you, making tiny involuntary jitters called microsaccades.

In fact, these jitters are the reason you continue to see the teacup at all—they introduce just enough variety in the light patterns on your eyes to prevent your visual neurons from completely adapting to what they’re looking at. Without microsaccades, the image of the teacup would soon start to fade, in the same way your nose may go blind to a constant odor.

Insects don’t have this luxury because their eyes are fixed firmly to their heads. But a new study shows that fruit flies have evolved a different strategy to adjust their vision without moving their heads—they move the retinas inside of their eyes.

“It is super interesting that fruit flies move their retinas because it suggests there could be a whole other set of features yet to be discovered that the visual system uses to help gather and process information,” says Lisa Fenk, a who conducted this study as a postdoctoral scholar in the lab of Gaby Maimon at The Rockefeller University and is currently a group leader in the Max Planck Institute for Biological Intelligence.

Using seemingly simple organisms like the fruit fly, in which advanced methods are available to study how brain circuits give rise to behavior, Maimon’s lab seeks to understand general principles of how brains produce goal-directed actions. The researchers say their new findings, published in Nature, should allow for many new discoveries on the biology of animal eye movements more generally. Such research could ultimately lead to a better understanding of cognitive disorders like autism and schizophrenia, in which eye movements are impaired.

The researchers used a combination of approaches—anatomical, behavioral, electrophysiological, and genetic—to gain a more holistic understanding of the fly’s visual system. First, they had to determine whether fruit flies even have muscles attached to their retinas. In experiments using a fluorescent molecule that binds to muscle fibers, microscopic images revealed two glowing muscles for each retina, confirming that such muscles indeed exist, and that they can move the retina in two dimensions. Next, the researchers held the flies’ heads steady in front of a panoramic LED screen displaying moving patterns and used cameras to track the position of the flies’ retinas. They found that the retinas were moving along with the patterns the way your eyes track the ball when you’re watching a tennis game. “We think the ability to track moving objects evolved independently in flies and humans,” Fenk says, “leading organisms with very different types of eyes to have very similar active strategies.”

The fly retinas weren’t just tracking patterns, however. They also made purposeful, jittering side-to-side and up-and-down movements when the insects were viewing a stationary scene, similar to the microsaccades of vertebrates. And when the researchers measured the electrical responses of visual neurons in flies, they found a correspondence between those retinal jitters and neural activity. This could mean that the spontaneous eye movements keep visual neurons from adapting, as in vertebrates, but the researchers are entertaining a more intriguing option, as well: that these tiny shifts, which often move the retina by only a degree or less in visual angle, improve the resolution of fly vision. Retinal movements may thus help to explain how fruit flies, which have only about 6000 photoreceptors per eye—a trifle compared to the hundreds of millions of receptors in a human eye—can still see surprisingly well.

“Perhaps retinal microsaccades that shift the fly’s world by a tenth or a fifth of a pixel help them distinguish if the dark speck in front of them is another fly or just schmutz,” Maimon says—a resolution boost significant enough to help the animals survive better in the wild.

He adds that optical engineers have recently been able to boost the resolution of cameras by introducing tiny movements the sensors, a parallel to insect vision that might help to improve the future design of such cameras.

Beyond improving resolution, the team also discovered a potential role for retinal movements in depth perception. In making their subjects walk on a treadmill-like contraption outfitted with small gaps, the researchers noticed that the flies were making convergent or cross-eyed retinal movements just at the moment of crossing the gaps. On the other hand, flies engineered to move their retinas more sluggishly had more difficulty clambering across. The researchers suspect that flies sweep the viewpoints of their two retinas as a way of judging the distance to a gap in front of them, for example. It’s a specific trick that humans don’t have—if we did, it would be as if we could judge distance by simply crossing our eyes.

Spiders are also able to move their retinas, a phenomenon that Fenk studied as a graduate student, and which motivated her and Maimon to wonder about fruit flies as well. “It will be fascinating to understand which insects other than flies can move their retinas, and what this means for their biology,” says Fenk.

“We’ve only the scratched the surface of understanding what functions these retinal movements serve,” Maimon adds. For example, Fenk and Maimon now intend to test if flies perform retinal movements when they sleep, or when they shift their attention to different parts of the visual field.