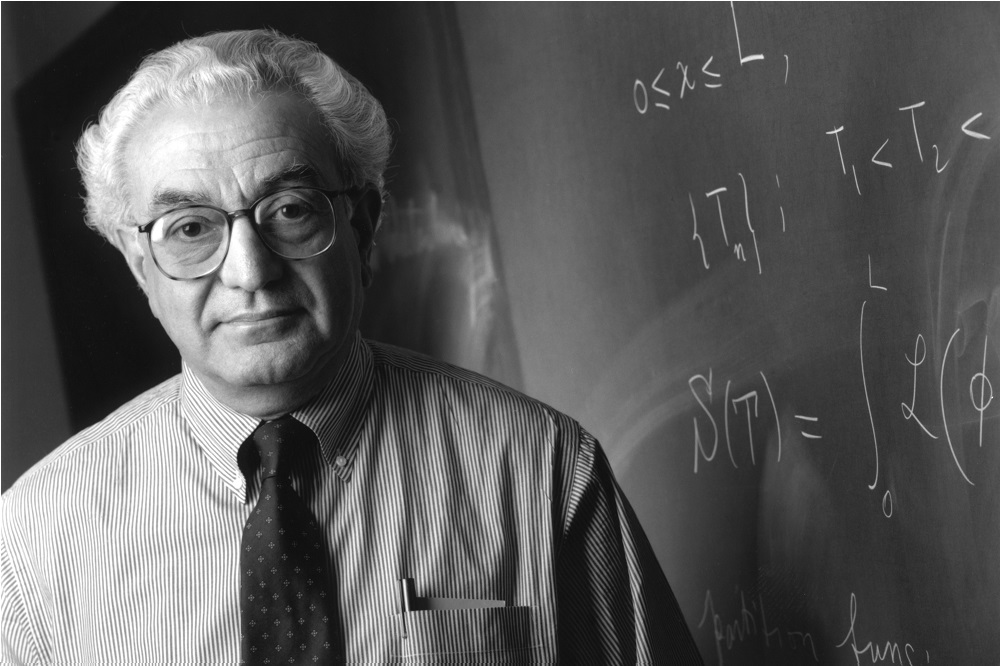 Theoretical physicist Nicola N. Khuri, an emeritus faculty member at The Rockefeller University, died on August 4 at age 89. Khuri was best known for using math to predict what happens when elementary particles collide in giant accelerators in experiments aimed to understand the nature of matter and energy.

Among his many contributions were building the foundation for potential scattering theory, a framework for studying how waves and particles deviate from their standard trajectory in response to collisions or other outside forces. This theory has been put to work in a number of important physics experiments, including at the Large Hadron Collider, the world’s biggest and most powerful particle accelerator.

Khuri also studied the general mathematical properties of quantum field theories, which are used to describe elementary particles and their interactions, and the basic structure of matter. His grasp of the most advanced mathematics made him a valued colleague both at Rockefeller and at many other institutions around the world.

Another of Khuri’s important contributions was to bring together other leaders in his field. In 1983, he spearheaded the second Shelter Island Conference, whose 1947 predecessor was the first major theoretical physics conference held in the United States after World War II. The original conference was a chance for scientific leaders of the day to come together and share ideas after a period of wartime secrecy surrounding the development of the atomic bomb and advances in radar. It revitalized and advanced the field in peaceful ways that would benefit humankind.

Khuri, whose brother has a house on Shelter Island, had long wanted to celebrate and acknowledge that historic meeting and build on the progress made in it. To commemorate the event, he was able to reunite many of the original participants—including luminaries like Richard Feynman and Linus Pauling—and bring them together with new leaders in theoretical physics: Stephen Hawking, Murray Gell-Mann, and others. The purpose of the 1983 meeting, much like that of the first, was to discuss the state of elementary particle physics and future directions in the field.

He held visiting positions at a number of institutions, including Stanford University and its National Accelerator Laboratory; the national laboratories of Lawrence Berkeley, Brookhaven, and Los Alamos; the European Center for Nuclear Research (CERN) in Switzerland; Institut des Hautes Etudes Scientifiques and Centre d’Etudes Nucleaires in France; and the Max Planck Institute in Germany. He was a fellow of the American Physical Society and a member of Sigma Xi, the scientific research honor society. He was also a trustee of the American University of Beirut.

Khuri was in many ways a citizen of the world. He sought to have a positive influence on the complex and volatile forces that govern the relations between nations and people. In that capacity, he served on the Council on Foreign Relations and the Carnegie Endowment for International Peace’s Panel on US Security and the Future of Arms Control.

He was married to the late Elizabeth Anne Tyson, a physician and expert in substance addiction at Weill Cornell Medicine, who died in 2017. He is survived by his daughter Suzanne Khuri and her husband Vijay Seshadri, his son Najib Khuri and his wife Claire Landis, and his three grandchildren Nicholas, Grace, and Gloria.