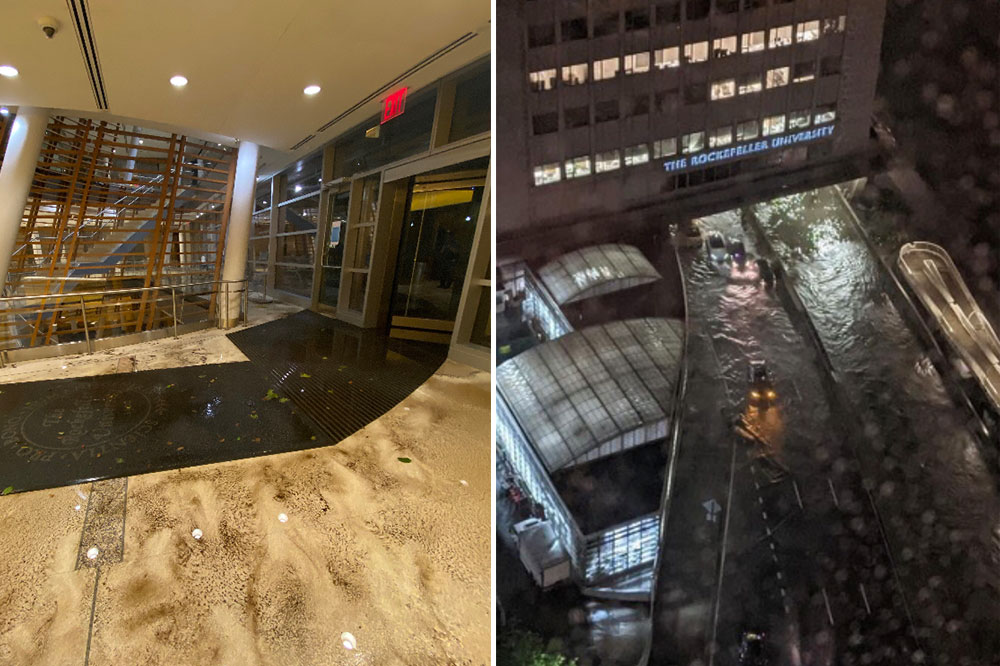 Water flooded parts of the CRC lobby and left the FDR Drive under about seven inches of water.

A record-breaking 7.5 inches of rainfall in a single day, resulting from the remnants of Hurricane Ida, caused severe flooding in many parts of New York City and the surrounding areas on September 1. But damage at Rockefeller was relatively limited thanks largely to flood control devices installed after the last record-breaking storm, Hurricane Sandy, struck in 2012.

The two storms were not similar. Flooding from Hurricane Sandy, which made landfall in southern New Jersey on October 29, 2012, was the result of an enormous 14-foot storm surge that caused the East River to overflow its banks. The FDR Drive was 32 inches underwater, and flooding to the lower floors of the university’s buildings, including the Power House, damaged pumps, elevator machinery, electrical equipment, computer servers, and a significant amount of flooring and sheetrock. Although no scientific resources were lost, the bill to repair damage ultimately totaled $500,000.

Following the storm, the university engaged in an analysis of the damage, a process which resulted in the identification of several improvements that could be made to reduce the risk of damage from future storms. One key upgrade was the installation of flood gates at doors and windows opening from low-lying basement mechanical rooms onto the FDR Drive.

This time, storm surge wasn’t the problem. But the extremely heavy rain from Ida overwhelmed storm drains on the FDR, causing water to back up on the roadway. At the peak there were seven inches of standing water covering the pavement. But the new flood gates did their job, and there was no water infiltration to the Power House.

“The damage we saw from Ida was a matter of drainage systems that were not designed for three inches of rainfall in an hour being unable to keep up with the flow,” says Alex Kogan, associate vice president of plant operations. “But we averted major damage thanks in large part to the improvements we made following Sandy.”

“Our exceptional staff in Custodial and the Power House went above and beyond to minimize the impact of this event and protect our labs from damage,” Kogan says.