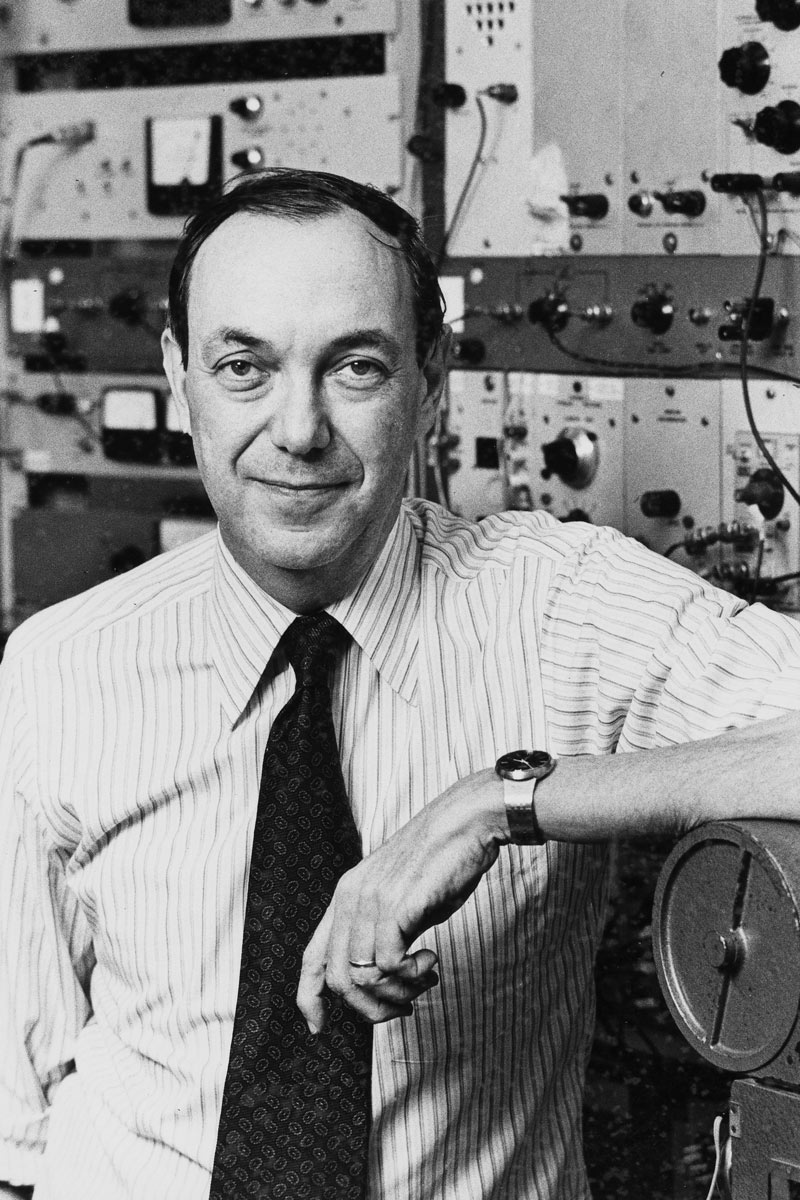 Victor Wilson, a neurophysiologist who traced the intricate neural mechanisms that govern our balance and posture, died on January 20 at the age of 92. Wilson came to Rockefeller as a research associate in 1953, and was Professor Emeritus and Director of the Laboratory of Neurophysiology. He spent more than 50 years at Rockefeller.

Throughout his career, Wilson sought to unravel the neurological mysteries of the vestibular system, a collection of tiny structures in the inner ear that feed the brain information about the body’s movements and position in space. When functioning properly, this so-called sixth sense hums along beyond our awareness, steadying our gaze and maintaining a physical equilibrium as we move through the world. When it is disrupted, whether by illness or injury, motion sickness, or medical treatment, vertigo and nausea ensue.

When Wilson began his career in the 1950s, the vestibular system was one of the hottest topics in neurophysiology; scientists knew that determining how the system worked would yield important insights into a whole range of disorders. They also hoped that elucidating its seemingly straightforward neural circuitry—sensory receptors in the inner ear send signals to the brain, which then triggers compensatory reflexes in the eyes, neck, spine, and limbs—would help them attack more complex problems by revealing the general mechanisms by which the central nervous system integrates sensory inputs and stimulates responses.

Wilson initially worked in the lab of physiologist David P.C. Lloyd, who had developed novel techniques for electrically stimulating and recording neural activity in the spinal cord. Early on, Wilson used those techniques to investigate a form of synaptic interaction between neurons that had previously been observed only in horseshoe crabs, showing it was in fact present in mammals, as well.

After setting up his own lab at Rockefeller, Wilson proceeded, in a series of elegant experiments that stretched over several decades, to trace the network of neural connections between the vestibular receptors in the inner ear; specialized clusters of neurons in the brain stem and cerebellum; and the muscles with which they communicate.

Using equipment manufactured in the university’s in-house instrument shop, he electrically stimulated vestibular receptors in animals, including pigeons and cats, then eavesdropped on individual neurons in their brains to determine precisely where those vestibular signals were received. He then stimulated those receiving neurons, delineating the pathways along which their own signals flowed: to the eyes, the neck, the spine, and onward to the muscles of the trunk and limbs.

In so doing, Wilson produced wiring diagrams for a major component of the central nervous system—and revealed that what had once seemed like relatively simple circuitry was deceptively complex. Some neurons, for example, received vestibular input from only one nerve fiber; others from many. Some populations of cells sent only excitatory signals, some only inhibitory ones, and some relayed combinations of both. What’s more, the brain itself sent signals back to the inner ear, regulating the function of the very organs upon which it relied for information.

In later years, Wilson explored the role that the cerebral cortex plays in the vestibular system; developed mathematical models to predict the behavior of individual neurons and neural circuits; and devoted an entire wing of his lab to studying the biological underpinnings of nausea and vomiting.

His work caught the attention of NASA, where scientists wanted to better understand vestibular side effects caused by weightlessness, including motion sickness, vomiting, and vertigo. Wilson kept a poster of a space shuttle launch, signed by a pair of astronauts, in his office, a reminder that his research, though focused on some of the smallest structures in the body, had vast implications.

Victor J. Wilson was born in Berlin on December 24, 1928. His parents, Russian Jews who fled to Germany during the Bolshevik revolution, left their adopted home when Hitler came to power in 1933 and relocated to Paris. Wilson attended the Lycée Claude Bernard, named for the renowned 19th-century French physiologist.

The family fled again, in 1940, leaving Paris just four days before the Nazis occupied the city that June. They spent several months in Cannes, then traveled across post-Civil War Spain to Portugal, and on to New York City by ship. Wilson learned English, his fourth language, as a middle school student in New York.

Wilson’s father, a civil engineer, wanted Wilson to become a doctor. But as a pre-med student at Tufts University, Wilson studied with Kenneth Roeder, who was among the first to use insects to investigate basic physiological problems. After being rejected by the top medical schools of the day (all maintained quotas on Jewish students), Wilson instead completed a master’s degree under Roeder’s mentorship and spent a year at Cambridge University conducting electrophysiological studies on cockroaches.

If Wilson’s newfound interests were medicine’s loss, they would prove to be physiology’s gain. After completing his Ph.D. at the University of Illinois, he soon found himself working as a research associate in Lloyd’s lab at what was then known as The Rockefeller Institute for Medical Research.

Wilson’s time at Rockefeller was interrupted by a three-year stint in the Army during which he carried out basic research at the Walter Reed National Military Medical Center. He returned to Rockefeller as an assistant professor in 1958, was promoted to associate professor 1962, and was made full professor in 1969. He retired in 1999.

Wilson first became interested in the vestibular system while working as a fellow at Australian National University in 1963, and he continued to expand his international collaborations over the succeeding decades, developing especially close relationships with colleagues in Japan.

In addition to numerous journal articles, Wilson co-authored the seminal textbook Mammalian Vestibular Physiology and contributed to The Vestibular System: A Sixth Sense. He was a fellow of the American Association for the Advancement of Science and a member of the Society for Neuroscience, the American Physiological Society, and the International Brain Research Association. He was on the editorial board of several journals, including Experimental Brain Research, where he was also editor of neurophysiology for more than 30 years.