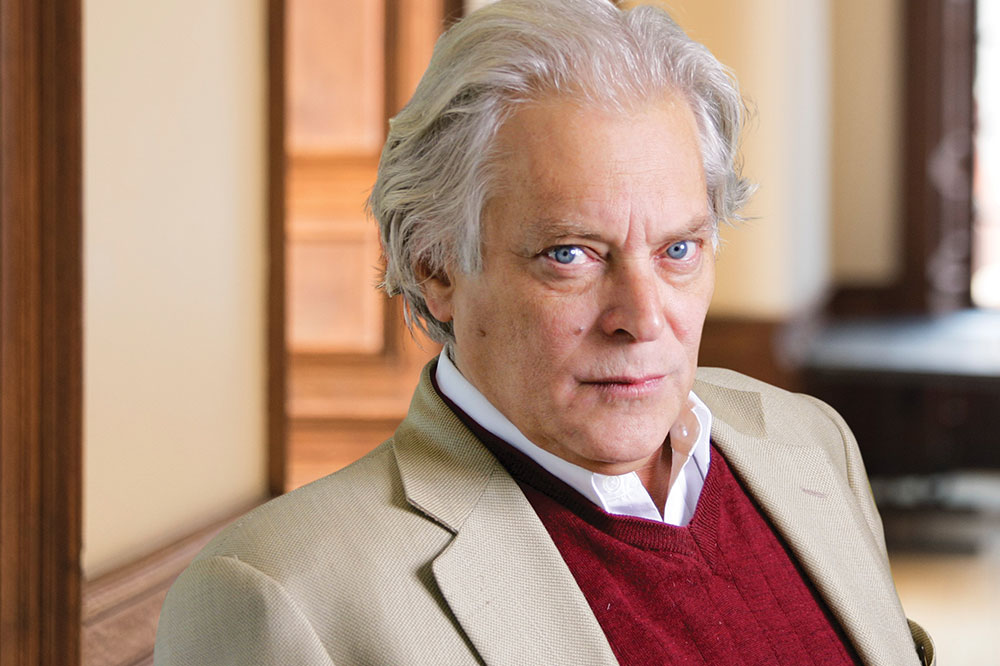 Mitchell J. Feigenbaum, a mathematical physicist whose groundbreaking work on deterministic chaos influenced fields ranging from cardiology to cartography, died in New York City on June 30 at the age of 74. Feigenbaum was the Toyota Professor and director of the Center for Studies in Physics and Biology at Rockefeller. Among his many accomplishments, he was the first to discover that many different physical systems follow a common “periodic doubling” path to chaos, paving the way for the emergence of the discipline known today as chaos theory.

In physics and mathematics, deterministic chaos denotes behavior so complex and unpredictable that it appears to be random; but in fact, it is the consequence of so-called deterministic nonlinear equations, for which the present situation exactly predicts the future behavior. The subtlety of chaos means that the slightest change in the present situation produces enormous changes in the subsequent behavior, and thus the long-range future is unpredictable. Phenomena such as turbulence in fluids, including weather, obey equations that are predictable for short times but not for long ones, as small perturbations magnify rapidly.

When Feigenbaum began his career in the early 1970s, the term “chaos theory” did not exist. Generations of scientists dating back to Isaac Newton had worked on problems related to the predictability of complex systems, such as the orbits of the planets in the solar system. By the middle of the 20th century, physicists and mathematicians—inspired by the pioneering work of the French physicist and mathematician Henri Poincaré—had succeeded in characterizing chaotic states, often enabled by computers, by framing such questions as geometric problems. But the boundary between regular and chaotic behavior remained fuzzy, particularly as it applied to real physical systems.

Feigenbaum stepped into this foggy arena, developing methods capable of computationally modelling the period-doubling transition to chaos, which proceeds in a series of geometrically focused steps that remain similar when scaled across orders of magnitude, an example of so-called fractal geometry. He first studied a simple iterated algebraic equation known as the logistic map, and was later able to demonstrate that these steps are “universal:” all physical systems that become chaotic via this period-doubling route to chaos exhibit the same behavior. Feigenbaum also found that this behavior is determined by two universal constants, now known as the Feigenbaum constants.

Working with Albert J. Libchaber, a Rockefeller colleague, Feigenbaum showed that this universal behavior occurred in a low-temperature fluid dynamics experiment. For this work, Feigenbaum and Libchaber won the prestigious Wolf Prize in Physics, in 1986. The universal behavior they described was later seen in many real-world examples, from electrical circuits to biological systems.

In the 1990s, Feigenbaum found an application for his knowledge of geometry and chaos in the field of cartography, a development that both fascinated and amused him. For centuries, mapmakers have struggled with a fundamental problem: that projecting the features of a spherical Earth onto a flat sheet of paper inevitably introduces distortions in shape and scale. Working as a consultant to the Hammond Corporation, makers of the Hammond Atlas of the World, Feigenbaum developed a projection methodology that produced highly accurate flat maps for any given portion of the globe. He also invented an algorithm capable of produce clear, non-overlapping labels for thousands of items such as cities and rivers in minutes (previous methods involved hand drawing and typically required months).

Soon after, while serving on a committee on next-generation currency design convened by the National Research Council, he developed a fractal-based geometric pattern to prevent the ability of counterfeiters to reproduce notes using copiers and scanners. He also co-founded Numerix, a company that developed Monte Carlo codes for evaluating market values and risks. These codes were a thousand times faster than existing ones, enabling real-time decisions on complex portfolios.

In the mid 1990s, Feigenbaum, working with Torsten N. Wiesel who at the time was the university’s president, was instrumental in establishing Rockefeller’s Center for Studies in Physics and Biology, a groundbreaking cross-disciplinary endeavor that aimed to broaden the scope of discussions at Rockefeller and provide access to contemporary thought in the theoretical sciences. The center, which embedded established physicists among a group of biological scientists and combined them with independent fellows focused on theoretical or computational science, has since served as a model for similar programs established elsewhere.

Feigenbaum never lost his capacity to surprise. Three decades after he discovered the constants that now bear his name, he again shook up the scientific world by crediting the Renaissance-era thinker Galileo Galilei with getting quite close to mastering 20th century physics. Feigenbaum argued that Galileo’s theory of invariance was sufficiently broad that, if supplemented by some modern mathematics, it would have led to Einstein’s theory of relativity—and he offered the math to prove it.

“Mitchell Feigenbaum was a mathematical physicist of great originality and a polymath who made an unforgettable impression on those who met him, and animated a large circle of devoted friends,” says Eric D. Siggia, Rockefeller’s Viola Ward Brinning and Elbert Calhoun Brinning Professor and a close collaborator of Feigenbaum’s. “Although he made his most far reaching contribution to the study of nonlinear dynamic, his singular focus allowed him to switch to unconventional topics that caught his attention—cartography, anti-counterfeiting, astronomy, optics, vision, art, philosophy, and more.”

Feigenbaum was born in Philadelphia on December 19, 1944, and raised in Brooklyn, where his passion for mathematics surfaced early. Fascinated by the family radio, he initially planned to become an electrical engineer; but while completing his bachelor’s degree in electrical engineering at The City College of New York, he became enamored of physics, and instead went on to earn his doctorate in theoretical physics at MIT.

Temporary positions at Cornell University and the Virginia Polytechnic Institute were followed by an extended stint at Los Alamos National Laboratory, where he did his early work on chaos. Before coming to Rockefeller as Toyota Professor in 1987, Feigenbaum served as a visiting professor at the University; a visiting member of the Institute for Advanced Study in Princeton, New Jersey; and a professor in the physics department at Cornell.

“To be mentored by Professor Feigenbaum was a great pleasure in my life,” says Gemunu Gunaratne, one of Feigenbaum’s former students who is now chair of the department of physics at the University of Houston. “He did suggest problems in chaos for me to work on; but more importantly, he encouraged me develop interests in many other intellectual pursuits, and look for commonalities between disparate fields. He was an intellectual whose interests were not restrained by artificial boundaries—he took delight in thinking about many issues at great depth, and developing his own unique insights.”

In addition to the Wolf Prize, Feigenbaum we the recipient of a MacArthur Foundation Award and was a member of the National Academy of Sciences, the American Academy of Arts and Sciences, and the American Physical Society.