“Discoveries are delicate things”: What a century-old war can teach us about science today

In science as in war, history is written by the victors—the accredited originators of special reports, newspaper headlines, Nobel Prizes. But behind many success stories are tales of lesser-known scientists, people who championed medical progress in important ways but were destined for obscurity.

In an essay published in the November issue of Harper’s Magazine, neuroscientist Jeffrey M. Friedman chronicles the academic career of an unlikely protagonist: the late biochemist Israel Kleiner, who in the 1910s came very close to discovering a revolutionary treatment for diabetes, but ultimately failed to bring his findings to fruition and make a name for himself.

Beyond relaying a spellbinding piece of Rockefeller history, Friedman’s “Discovery, Interrupted” is a study of the timeless laws that govern the very nature of discovery. In his article, which he describes as a “a personal odyssey to understand the forces that both shaped and limited Kleiner,” Friedman, the Marilyn M. Simpson Professor, elucidates the covert costs of war, the perils of fast-changing science policy, and how personality characteristics can make or break a scientist’s career. 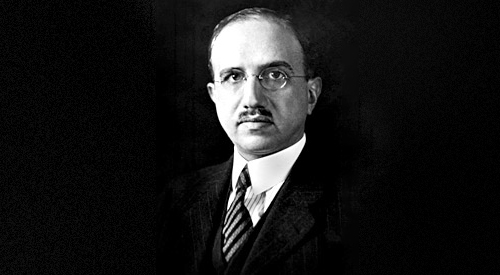 When World War I broke out, Kleiner was conducting research on diabetes, then a fatal disease, at what was then known as the Rockefeller Institute for Medical Research. During and shortly after the war, he published findings related to his discovery of a pancreas hormone—later to be identified as insulin—that could lower blood glucose and treat diabetes in animals.

But unfortunately for the thousands of patients who were dying from the disease at that time—and for Kleiner himself, professionally—support for his research dwindled. His bosses lost interest in his work in the face of seemingly more urgent health threats: they were heavily involved in supporting the United States Army with medical personnel, and in conducting research aimed to curb the spread of infectious disease among soldiers.

Kleiner, who was not participating in these efforts, eventually lost his position at the university and had to discontinue his diabetes research. When the clinical promise of insulin was belatedly proven, in the 1920s, its discovery was attributed to other researchers.

“Discoveries are delicate things,” Friedman writes. The story of Kleiner’s academic exile holds important lessons for today’s society, where the value of open-ended research is often being challenged. It is a much-needed reminder of what Friedman calls “the inestimable value of pursuing knowledge for its own sake.”

“Focusing too much on mainstream notions of what is important or useful carries the risk that the very discoveries that make translational research possible will never be made,” Friedman writes. “It also presupposes that we know what will be important in the future”—something history has shown us, again and again, that we don’t know.