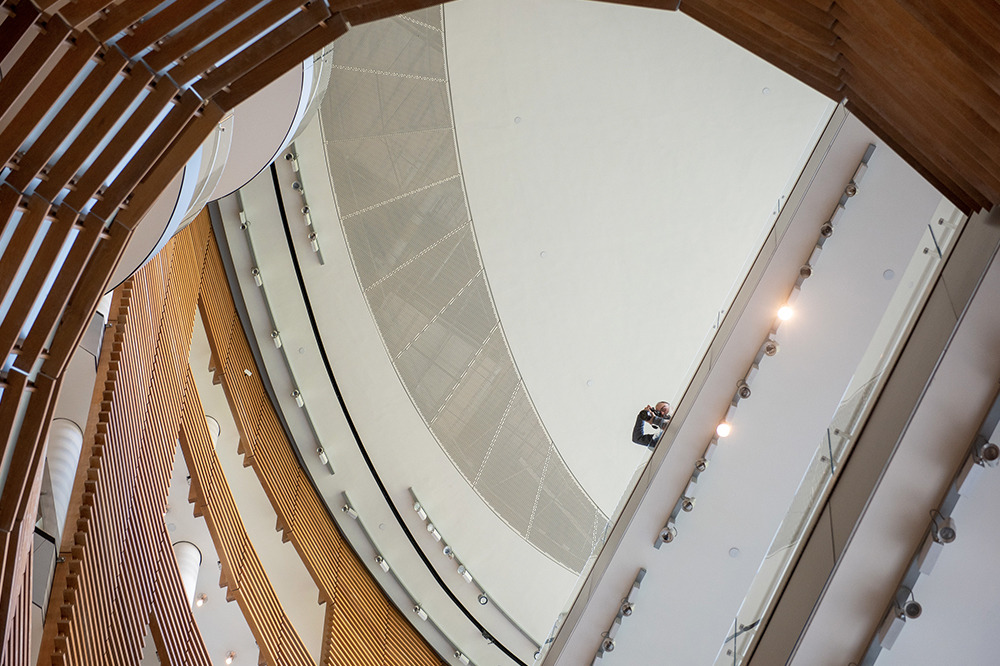 A visitor seizes a photographic opportunity in the Collaborative Research Center.

“What a beautiful park this is. Can I come in?”

“What’s inside that blue dome?”

On most days, security guard Rohan Davis has to politely turn away inquisitive passersby who try to enter campus without an appointment. But one weekend each fall, he is able to welcome unannounced guests. This is when Rockefeller hosts historical and architectural tours as part of Open House New York, a citywide festival that puts on display buildings and spaces not usually open to the public.

“Open House is a great way for people to come in and see what Rockefeller’s all about,” Davis says.

Rockefeller first began hosting the event in 2012, with just over 70 visitors and a small handful of volunteers. Since then, the turnout has increased exponentially; this year, on October 13 and 14, over 750 people took the tours.

In addition to presenting architectural highlights like the Markus Library and the Greenberg building, the tours also offer an overview of Rockefeller’s mission, scientific impact, and history. In preparation for this year’s event, the format was redesigned to accommodate large crowds. Groups of around 15 visitors were escorted around campus by a tour guide, with additional performances by four “station masters” posted in Caspary, Founders Hall, the Great Hall, and RockEdu’s outreach lab. Having several volunteers collaborate on each tour saved tour guides from losing their voices, and it gave visitors a chance to hear from a variety of Rockefeller community members.

Individuals from a total of 17 departments and labs volunteered their own time by either giving tours, being station masters, or assisting at registration. According to surveys, visitors especially enjoyed the chance to interact with the university’s students and postdocs, who received many questions about their work and what it’s like to be a scientist.

In addition, guests were impressed by presentations of the new River Campus that took place in the Great Hall and involved the display of a time-lapse video showing one of the massive building units being hoisted into place.

“I was completely fascinated by the way they brought in the steel modules and doing all of that construction in the middle of the night over the FDR,” says Minnie Romanovich, a New York City resident who attended a tour. “It was mind-blowing and eye-opening at the same time.”

A total of 46 tours took place over the course of the weekend, most lasting for over an hour. Barbara Bosch, a graduate student in Jeremy Rock’s lab, led tours for the second year in a row. “Being a tour guide for Open House is a unique chance to show our amazing campus to the community,” she says. “It is also a way for me to give back to the people that make it possible to do our science.”

If you work at Rockefeller and are interested in volunteering next fall, email ohny@rockefeller.edu.