This instrument will make it possible to build (almost) any other 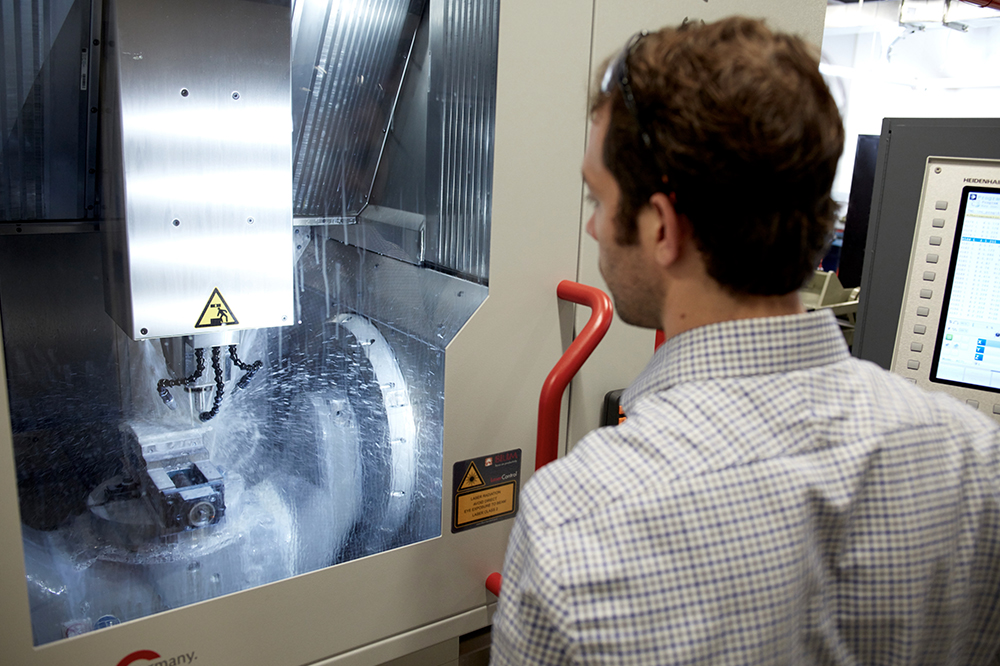 It takes a village to procure eight metric tons of high-precision engineering power. When Rockefeller’s five-axis CNC milling machine, the C22, arrived on campus last year its installation required plant operations to cut out an existing freight elevator, a rigging crew to gently lower it in pieces through an elevator shaft, and a team of engineers to meticulously assemble the mechanical behemoth. Then began the complex work of test driving and adjusting the machine, today the centerpiece of the Precision Instrumentation Technologies facility, or PIT.

The mill enables the PIT machinist and engineers (the “PIT crew”) to custom-make research instrumentation to help scientists across all research areas at Rockefeller solve specific and unique problems—whether the solution is mechanical, optical, or electronic. Located in Plaza Level A underneath the Peggy Rockefeller Plaza, the facility was launched with support from Rockefeller’s Kavli Neural Systems Institute (NSI).

Designed by German manufacturer Hermle, the C22 is a compact, vertical apparatus that uses rotary cutters to create objects. Unlike additive fabrication machines like 3-D printers, which build objects by adding layer upon layer of material, milling machines take a subtractive approach, sculpting products out of larger blocks of stainless steel, aluminum, engineered plastic, or other materials.

The C22 has five axes: two around which material is cut and three around which the cutting tool moves, with a positional accuracy of less than eight microns. Because the instrument is so precise, it can create parts with very complex geometries. It runs on numerical control software, which converts 2-D and 3-D models into computer code that directs specific movements. Finished parts might be specialized microscope stage adapters, precision-cutting instruments, cell-manipulation tools, or surgical tools.

The PIT is the new name for the combined Instrument Design and Fabrication Facility and the Precision Fabrication Facility, which relocated from Smith Hall earlier last year. “The co-localization and establishment of the PIT further boost the university’s instrument design and fabrication capabilities,” says Amy Wilkerson, associate vice president of research support. “It maximizes the synergy between additive fabrication tools, and the most advanced subtractive tool, the C22 mill.”

The PIT crew staff brings together an array of expertise, and is committed to both executing projects and training scientists in instrument design and fabrication. Scientific machinist Peer Strogies runs the mill and assists researchers with titanium 3D implants and equipment repair. Dan Gross, scientific engineer, is trained to help design and fabricate easy-to-use custom research tools, as well as to improve and repair existing scientific equipment. Jim Petrillo, instrumentation engineer, manages the makerspace where he translates concepts into functional tools and trains users in design fundamentals and digital fabrication technologies.

“Bringing engineering capabilities to biological problems can have a transformative impact on science,” says Alipasha Vaziri, associate professor and head of the Laboratory of Neurotechnology and Biophysics, which has a strong focus on development of new brain imaging tools. “The PIT is more than just a fabrication shop—scientists are able to work with dedicated engineers to develop solutions for all sorts of technical obstacles.”

“Rockefeller has a long history of creating tools and machinery that move science forward,” says Kavli NSI Director Leslie B. Vosshall. This tradition dates back to the early 20th century, when the university hired glass blowers, machinists, and electronics engineers to help the faculty develop cutting-edge scientific instruments, some of which are on display in the lower level of Caspary Hall. “The PIT is bringing that tradition into the 21st century,” says Vosshall.