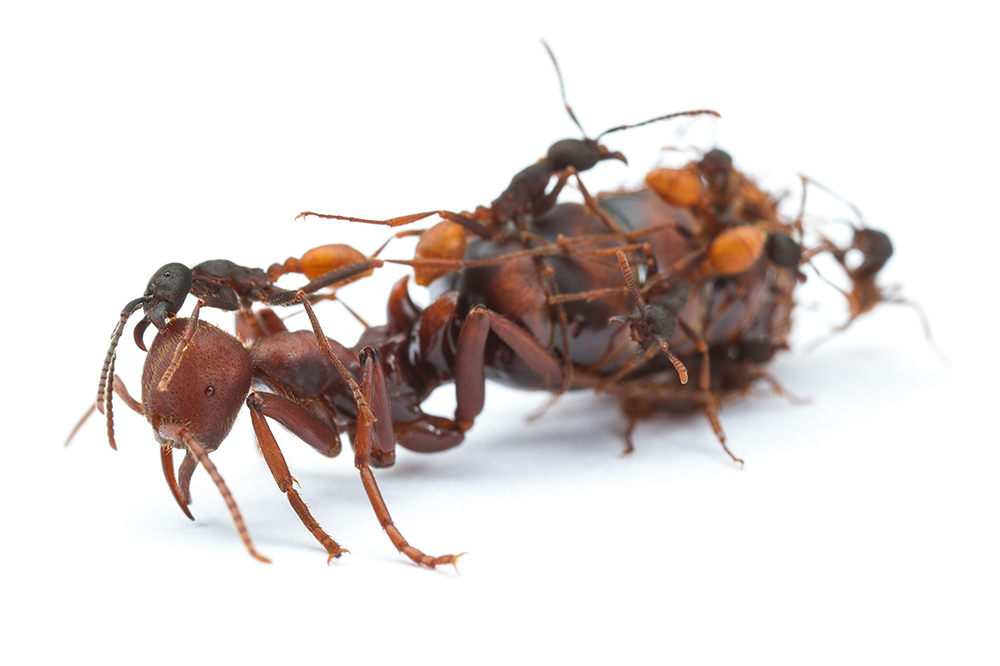 In many ant species, workers are much smaller than queens and cannot reproduce. Researchers wanted to know: how did these physical and behavioral differences evolve?

Worker ants, despite their diligence, seldom encounter opportunities for social mobility. In many species, individuals adhere to strict caste roles: queens lay eggs and workers take care of almost everything else, including offspring.

In a new study, published in Science, Rockefeller scientists describe the molecular mechanisms controlling this division of labor. “We wanted to know: what makes the queens lay eggs and the workers sterile?” says Daniel Kronauer, the Stanley S. and Sydney R. Shuman Associate Professor. Kronauer and colleagues report that a gene coding for ILP2, an insulin-like peptide, is instrumental in promoting and suppressing reproduction—a finding that illuminates a possible trajectory for the evolution of specialized castes.

A different kind of insulin injection

Working with graduate fellow Vikram Chandra and postdoctoral associate Ingrid Fetter-Pruneda, Kronauer first searched for differences in gene expression between reproducing and non-reproducing ants from a variety of species. They discovered that a single gene, which codes for the peptide ILP2, is consistently upregulated in reproducers. ILP2 is the ant version of insulin and, like human insulin, probably regulates metabolism. According to Kronauer, there is a direct link between reproduction and food intake: “If the nutritional state is really low, you can’t afford to produce offspring,” he says.

Next, the researchers studied the role of insulin in the clonal raider ant Ooceraea biroi. This species lacks distinct queens and workers; all ants simultaneously enter a reproductive phase, followed by a brood care phase in which the insects nurture their young. Transitions between phases are regulated by the presence of larvae: when newborns are around, the ants stop reproducing and shift into caretaking mode.

When clonal raider ants tend to their larvae, the interaction suppresses their insulin production; and with low levels of insulin, the adult ants cannot reproduce. (Video by Vikram Chandra and Ingrid Fetter Pruneda)

In another experiment, the researchers injected ants with synthetic insulin during brood care, which resulted in ovary activation—even when larvae were nearby. This outcome suggests that ants with heightened insulin can override larval cues and reproduce at any time.

“In the brood care phase, the presence of larvae typically reduces insulin in adults—so their ovaries switch off and they go care for the larvae,” says Chandra. “But if you experimentally inject insulin, you can break this cycle.”

This research offers clues about how ants evolved from solitary organisms to social species with specialized castes. Kronauer proposes that, first, insulin signaling became responsive to the presence of larvae, resulting in reproductive cycles reminiscent of those observed in O. biroi. Such an adaption makes good sense, as ants caring for offspring must prioritize food finding over egg laying—and both behaviors are known to be regulated by insulin.

Following this evolutionary stage, says Kronauer, the question becomes: “How do ants break out of this cycle?” He proposes that, due to individual variation, some ants would have naturally high levels of insulin, and others would have low levels. Notably, the researchers observed exactly this kind of variation in O. biroi. Kronauer posits that high-insulin individuals, like his insulin-injected ants, would be able to override larval cues and reproduce continuously, whereas low-insulin individuals would be very sensitive to the presence of larvae and thus more likely to focus on brood care.

“Once you have that kind of asymmetry in a colony, and the colony performs well, selection will drive insulin levels further apart,” says Kronauer. “The eventual result would be two castes of ants—workers and queens.”

By increasing the size of ant colonies bit by bit, scientists identified the mechanism responsible for the evolution of mass raiding behavior.

Turtle ant soldiers and their oddly-shaped heads suggest that evolution is not always a one-way street toward increasing specialization.

A new study in ants demonstrates that living in groups leads to improved fitness. The researchers show that, in larger groups, ants take on specialized roles and colony stability increases.