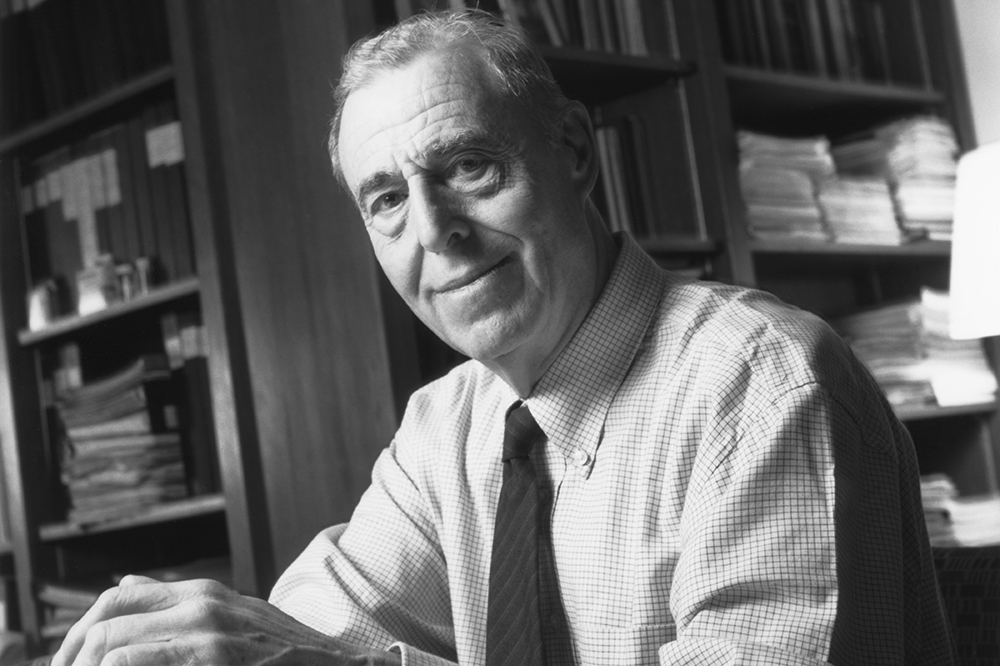 Ezechiel Godert David “Eddie” Cohen, an emeritus faculty member at The Rockefeller University and leader in statistical physics and nonequilibrium statistical mechanics, died September 24 at the age of 94.

The field of statistical physics seeks to understand the behavior of matter in terms of the properties of the molecules that make up that matter. Because of the incalculable number of molecules that compose every piece of matter, sophisticated mathematical approaches are central to achieving this understanding.

“Eddie’s passing away is a great loss,” says Mariano Lòpez de Haro, a former postdoc of Cohen’s and a professor at the Institute of Renewable Energies at the Universidad Nacional Autonoma de Mexico. “He played an influential role in my career, and I profited from his experience, his knowledge, and above all from his kindness and courtesy.”

Cohen first became well known in the scientific community for devising a kinetic theory to describe the properties of dense gases and liquids. In 1961, he predicted the theoretical possibility of an incomplete phase separation in liquid mixtures of the two helium isotopes (H3, H4) at very low temperatures. His prediction was later verified experimentally, and this work led to the design of the helium dilution refrigerator, which is used in laboratories to cool materials to temperatures near absolute zero.

His later research on the transport of dense gases and liquids and on friction had critical applications in a number of scientific fields, including geology and oceanography.

In 2004, Cohen won the Boltzmann Medal from the Committee on Thermodynamics and Statistical Mechanics of the International Union of Pure and Applied Physics. The medal, awarded every three years, is the highest award in the field of statistical mechanics. That same year, he received a Royal Knighthood in the Order of the Dutch Lion, an honor that acknowledges individuals in arts, science, sport, and literature. He was a fellow of the American Physical Society, a member of the Johns Hopkins Society of Scholars, and a member of the Royal Netherlands Academy of Arts and Sciences.

Cohen was passionate about education and sharing his knowledge. He spent time as a visiting professor at several universities over the years, including the University of Florida, the University of Delaware, the Australian National University, and a handful of institutions in Europe. In addition to English and Dutch, he spoke German, Italian, and French, which he learned by studying a dictionary while hiding out during the war.

Cohen also founded a student society, Sirius, at the University of Amsterdam and a summer school that brought together physicists from across the Netherlands and later Europe. He edited a number of books, including the series “Fundamental Problems in Statistical Mechanics I–VI,” which contains an account of the developments in his field throughout the 1960s, 70s, and early 80s.

In addition to his dedication to science, he loved classical music, opera, and art. He frequently attended musical performances, especially the Metropolitan Opera, read broadly, and visited museums.

“Almost every morning after we discussed the latest progress of our work, our conversations would turn into lively discussions about classic German literature and philosophy,” says Rudi Schmitz, a former postdoc who is professor of physics at RWTH Aachen University in Germany. “I’m grateful for his encouragement, his care, and the dinners at his apartment, where we shared our thoughts on the world and listened to good music.”

Cohen retired from Rockefeller in 1993 but remained scientifically active. He moved to Iowa City, Iowa, in 2015 to be near family even as he continued to collaborate and publish through 2016. His last paper was published this August in Physical Review.