The Rockefeller University today awards doctoral degrees to 23 students who have completed their studies in bioscience. As part of a tradition dating back to the university’s first convocation ceremony in 1959, each doctoral candidate is presented for the degree by his or her mentor. 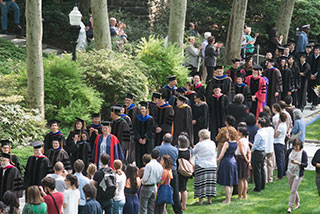 Anthony B. Evnin is being recognized for his role in shaping the modern biotechnology industry and his profound influence on the course of translational research. Evnin joined the venture capital firm Venrock in 1980, and led its first investments into biotechnology and the greater life sciences field. For three decades, Evnin has also supported Rockefeller University in its mission, first as a member of The Rockefeller University Council, then as a member of the Board of Trustees, to which he was elected in 1999. He was elected a trustee emeritus in 2016. Evnin received a Ph.D. in chemistry from the Massachusetts Institute of Technology. He now serves as a director of Bridge Medicines, a leading-edge drug-discovery initiative launched last year by Rockefeller and its Tri-Institutional partners.

Mary-Claire King is both a renowned human geneticist and a passionate human rights activist. Among other discoveries, King was part of the team to discover that the DNA of humans and chimpanzees is more than 99 percent identical, and she was the first scientist to demonstrate that predisposition to breast cancer can be inherited, resulting from mutations in a gene that she named BRCA1. Her current research focuses on inherited breast and ovarian cancer, the genetic bases of schizophrenia, and severe single-gene disorders. King received a Ph.D. in genetics from the University of California at Berkeley. She joined the University of Washington in 1995, where she is currently a professor in the departments of medicine and genome sciences. In 2010, she won Rockefeller’s Pearl Meister Greengard Prize, given to honor women who have made extraordinary contributions to biomedical science.

Matthew Meselson is being recognized for insights that laid the groundwork for the study of DNA replication, recombination, restriction, and repair. With his colleagues, Meselson demonstrated how DNA strands combine when they’re replicated, proving a theory known as semi-conservative replication: As one DNA strand becomes two, each copy contains one of the original strands and one new strand. Meselson also helped establish the existence of messenger RNA, and found and characterized the first restriction enzyme, a DNA-cutting molecule that became a vital tool in molecular biology laboratories. His current research is in the area of molecular population genetics and evolution. For more than 50 years, Meselson has been an effective advocate of measures to prevent biological and chemical warfare and the hostile exploitation of biology. He received a Ph.D. from the California Institute of Technology and joined the faculty at Harvard University in 1960, where he is currently a professor.

Steven Weinberg has made crucial contributions to the Standard Model of particle physics, which helps explain how the fundamental forces of the universe govern elementary particles. Weinberg shared the Nobel Prize in Physics in 1979 for his work on the unification of electromagnetism and the weak nuclear force. His research has primarily been in particle physics, quantum field theory, gravity, supersymmetry, and cosmology. Weinberg’s explorations of the cosmological constant problem—a disagreement in physics about the value of energy density in the vacuum of space—provide some support for the prediction of a multiverse, or parallel universes with different laws of physics. He received a Ph.D. from Princeton University, and joined the University of Texas at Austin in 1982. Also a prolific author, in 1999 he was awarded Rockefeller’s Lewis Thomas Prize Honoring the Scientist as Poet.