Carolyn Walch Slayman, who was one of the first women to graduate from Rockefeller’s Ph.D. program, died last December at the age of 79. Dr. Slayman spent nearly 50 years at the Yale School of Medicine, where she was Sterling Professor of Genetics and deputy dean for academic and scientific affairs, positions she held until her death. 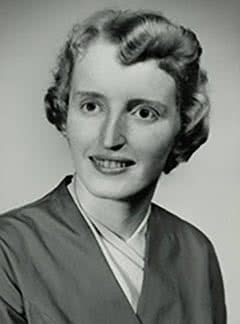 Carolyn Walch Slayman in 1959 at Rockefeller. (Courtesy of the Rockefeller Archive Center)

A graduate of Swarthmore College, Dr. Slayman joined Rockefeller’s Ph.D. program in 1959. She studied biochemical genetics in the laboratory of Nobel laureate Edward L. Tatum. From there, she did postdoctoral work in membrane biochemistry at Cambridge University before joining Yale as assistant professor in the department of microbiology and the department of physiology in 1967.

During her long tenure at Yale, Dr. Slayman helped establish the graduate program and served as director of graduate studies in the department of human genetics, which she would go on to chair in 1984, becoming the first woman at Yale to head a department. As the deputy dean from 1995 until her death, Dr. Slayman oversaw faculty recruitment and helped create many of the medical school’s core programs, including the Yale Center for Genome Analysis.

Research in the Slayman lab focused on genes that encode membrane transport proteins. In groundbreaking work, Dr. Slayman, who was a member of the National Academy of Medicine, used microorganisms such as bread mold and yeast to study ion transport across cell surface membranes. Although she scaled her lab back in 2000, she continued to play an active role in running it, often holding weekend meetings with her lab staff up until her death.

Dr. Slayman is survived by her husband of 57 years, Clifford L. Slayman, professor of cellular and molecular physiology at Yale, and her children, Andrew Slayman and Rachel Platonov.