The Rockefeller University awarded doctoral degrees to 31 students at its convocation ceremony today. Each doctoral candidate was presented for the degree by his or her mentor, a tradition dating back to the university’s first commencement ceremony in 1959. 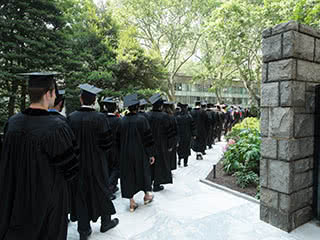 James Allison is being honored for his work elucidating the fundamental mechanisms of cellular immunity. Among other discoveries, Allison demonstrated how a molecule called CTLA-4 inhibits activated T cells, impeding with their ability to launch an effective immune response against tumors. This work spearheaded the development of drugs called checkpoint inhibitors, designed to help the immune system recognize and attack cancer cells. Allison received his Ph.D. from The University of Texas at Austin. He joined The University of Texas MD Anderson Cancer Center in 2012, where he is currently professor and chair of the department of immunology.

Max Cooper is recognized for his insights into how white blood cells fight infections and how defects in B cell development can lead to leukemia, lymphoma, and autoimmune diseases. Cooper and his colleagues described two distinct types of white blood cells, B and T lymphocytes, which play separate but complementary roles in the immune response. They showed that B cells derived from bone marrow in humans primarily create antibodies, whereas T cells, derived from the thymus gland, are agents of cell-mediated immunity. Cooper’s research has set the stage for the development of monoclonal antibodies, which have transformed both basic research and drug discovery. Cooper received his M.D. from Tulane University School of Medicine. He is currently a Georgia Research Alliance Eminent Scholar in Developmental Immunology and professor of pathology and laboratory medicine at the Emory University School of Medicine.

Suzanne Cory is receiving her honorary degree for offering key insights into immunology and cancer biology. She and her colleagues contributed to the understanding of how B lymphocytes assemble their antigen receptors by gene recombination. In later work, they helped elucidate how abnormal chromosome rearrangements can lead to the development of cancer. They also broadened the understanding of cancer through studies of the molecular mechanisms that promote tumor formation by interfering with cell death processes, which normally protect against cancer. Cory is the first woman to have served as director of the prestigious Walter and Eliza Hall Institute in Melbourne, where she is currently a professor. She received her Ph.D. from the University of Cambridge. In 2009, she won Rockefeller’s Pearl Meister Greengard Prize, given to honor women who have made extraordinary contributions to biomedical science.

Alice Dautry-Varsat is being recognized for her work advancing the understanding of the immune system’s response to infectious agents. Her studies have focused on receptor-mediated endocytosis and cell signaling in the immune system. Her work on intracellular pathogens and their hosts has helped explain key aspects of host–pathogen interactions. In 2005, Dautry-Varsat became the Institut Pasteur’s first woman president. As president, a position she held through 2013, she led the construction of a new research facility dedicated to infection biology and promoting expanded programs in virology. Dautry-Varsat, who is currently head of the institute’s Biology of Cell Interactions Laboratory, received her Ph.D. from the University of Paris.