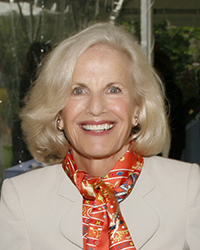 Marnie S. Pillsbury has been a dedicated and highly esteemed member of the Rockefeller University community for three decades. After an outstanding tenure as a trustee and vice chair of the board, she was elected a trustee emerita of the university last year.

Ms. Pillsbury has made extraordinary and lasting contributions to the university and society at large. She served as chief philanthropic advisor to David Rockefeller from 1990 until his death in 2017, and then as an advisor to his estate. Working closely with Mr. Rockefeller, she helped guide his philanthropy to have maximum impact at the myriad organizations he supported, substantially amplifying the effectiveness of his charitable giving. From 1990 until 2014, Ms. Pillsbury served as executive director of The David Rockefeller Fund.

As a Rockefeller trustee from 1998 to 2019, Ms. Pillsbury brought strong leadership, superb strategic acumen, a deep knowledge of the university, and exceptional dedication to her board responsibilities. Her astute guidance as vice chair of the board from 2005 to 2019 was a significant factor in the university’s success during a period of great achievement. Her service over the years on a remarkable seven committees of the board—Audit, Compensation, Development, Educational Affairs, Executive, Facilities and Infrastructure, and Nominating and Governance—immeasurably strengthened the university. Rockefeller University was fortunate to call upon her wisdom and financial acumen in 2008, when, as chair of the Audit Committee, she helped steer the institution through a historic financial downturn. As vice chair of the Development Committee, she introduced the university’s work to many new friends and benefactors. In addition, she helped launch and sustain the university’s premier affinity groups, Women & Science and Parents & Science.

Marnie Pillsbury is a trustee of the Rockefeller Brothers Fund, the International Women’s Health Coalition, and the Center for Curatorial Leadership. She is secretary of The Pinkerton Foundation, and a member of the Council on Foreign Relations and the International Council at The Museum of Modern Art.