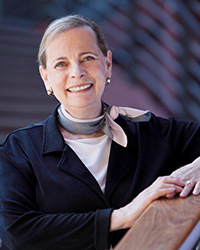 Lucy Shapiro has applied her intellect, her capacity to think in three dimensions, and her love of science to illuminate the cell cycle’s temporal and spatial choreography. Born and raised in Brooklyn, she defied her parents’ expectation that she would gain entry to the High School of Music and Art in New York City based on her musical skills. Instead, she secretly learned to draw and secured admission based on her artistic talents. At Brooklyn College, she majored in biology and fine arts, thinking she would pursue a career in medical illustration. That plan got derailed when she was convinced to take an organic chemistry class by Rockefeller’s own Ted Shedlovsky.

Hooked by the intellectual rigor of the topic and its visual nature, she decided to study the chemistry of life. As a graduate student, Shapiro discovered an RNA-dependent RNA polymerase, and she earned her Ph.D. at the Albert Einstein College of Medicine. Soon afterward, she accepted a faculty position at Einstein and launched her own lab. In 1989, she became a professor at Stanford University where she founded a new Department of Developmental Biology, and has directed the Beckman Center for Molecular and Genetic Medicine since 2001.

Her research has probed how cells translate a nucleic acid molecule’s linear code into three dimensional activities and how they differentially read that same genetic code to produce physiologically distinct offspring. Using the bacterium Caulobacter crescentus, she has mapped a multitude of mechanisms by which the cell functions as an integrated network as it divides. These findings have illuminated the exquisite precision that single-celled creatures deploy as they place specific components that perform specific tasks at specific sites and times. Her insights into bacterial asymmetry have shed light on the development of complex organisms.

In collaboration with Stephen Benkovic, she designed a new class of antimicrobial compounds that are based on boron rather than carbon. Two of these drugs have reached the market, and the team is now expanding this approach from medicine to agriculture.

Shapiro served as a White House advisor on bioterrorism threats, and she has won numerous awards and honors, including the National Medal of Science, the Gairdner Award, the Louisa Gross Horwitz Prize, and the Pearl Meister Greengard Prize.