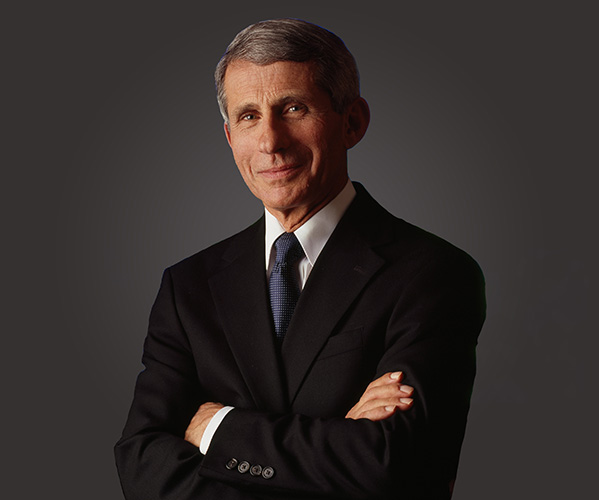 Anthony Fauci has had an extraordinary career in biomedical research and national public health leadership. As director of the National Institute of Allergy and Infectious Diseases (NIAID) since 1984, he has effectively led the institute’s fight to prevent, diagnose, and treat many of the greatest challenges to global public health, including infection with the HIV and SARS-CoV-2 viruses.

A native of Brooklyn, Dr. Fauci attended Regis High School (on 84th Street between Madison and Park), and earned his B.A. from Holy Cross and M.D. from Cornell University Medical College. After graduation in 1966, he began his research career at NIAID, where he devised therapies for several rare and formerly fatal inflammatory diseases before becoming the Institute director. He also serves as the chief medical advisor to the President of the United States under President Biden.

Dr. Fauci has been a key figure in the fight against acquired immunodeficiency syndrome (AIDS), first recognized in 1981, and subsequently found to be caused by HIV. He has made seminal contributions to the understanding of how HIV destroys the body’s defenses and has been instrumental in developing highly effective strategies for therapy, as well as in efforts to develop a vaccine to prevent HIV infection. He spearheaded the President’s Emergency Plan for AIDS Relief (PEPFAR), which has saved millions of lives in the developing world.

Through seven presidential administrations, Dr. Fauci has provided guidance on public health and medical issues to the U.S. population and its presidents. During the COVID-19 pandemic, NIAID investigators made critical contributions to development of the safe and effective vaccines against the SARS-CoV-2 virus. Dr. Fauci earned the nation’s trust by providing clear, compassionate advice rooted in the available facts through the rapidly evolving pandemic. He is revered for his insistence on the pursuit of truth, and the distinction between what is known and what is not, serving with unwavering dedication despite an extremely challenging political environment. In addition to spearheading NIAID’s role in combatting HIV and COVID-19, he ushered the public through numerous other challenges, including the anthrax scare of 2001 and outbreaks of swine flu, Ebola, and Zika.