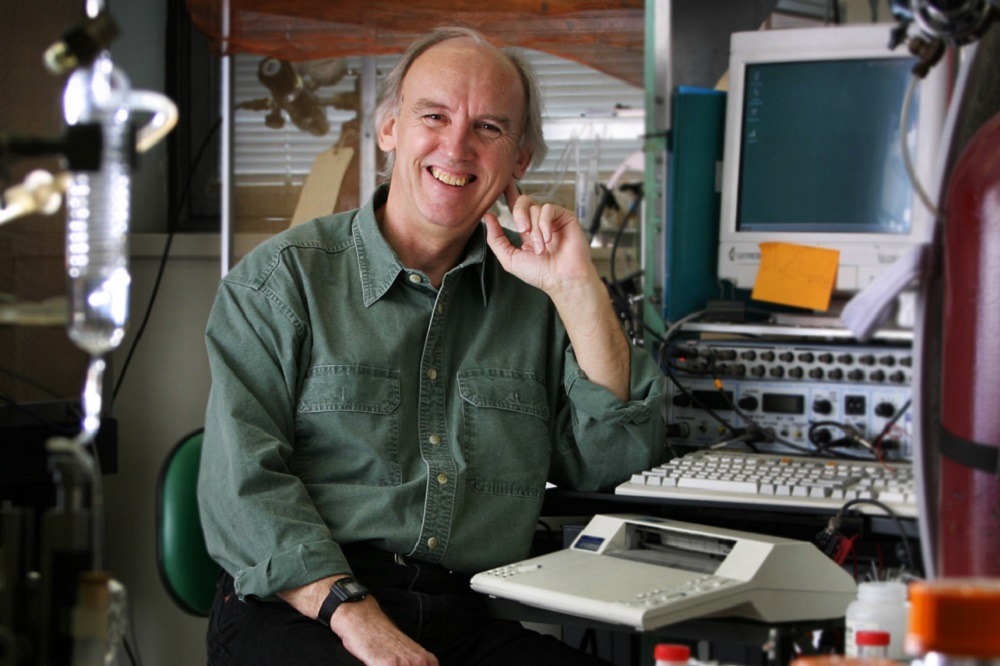 Cell physiologist David C. Gadsby, Patrick A. Gerschel Family Professor Emeritus and head of the Laboratory of Cardiac and Membrane Physiology at The Rockefeller University, died Saturday at age 71. Gadsby was best known for his studies determining the mechanisms by which charged particles called ions move across cell membranes. Gadsby studied both the processes responsible for basic physiology, such as the rhythmic beating of the heart, and those responsible for pathology, such as cystic fibrosis.

Part of Gadsby’s research focused on ion pumps. He examined a specific pump, the sodium pump, which uses metabolic energy to pump sodium ions out of and potassium ions into cells, maintaining the proper concentration of each. This pump is found in every cell in the animal kingdom, underlying diverse functions including the conduction of electrical signals by neurons, muscle contraction, hormone release, and maintenance of blood volume. Gadsby developed methods to measure the amount of electricity generated by this process, providing insights into the initiation and conduction of heartbeats. This work made important contributions to understanding the underlying causes of heart conditions such as cardiac arrhythmias, as well as to the development of new therapies.

Gadsby also studied the chloride ion channel CFTR, whose malfunction underlies the disease cystic fibrosis. CFTR proved very difficult to understand because its closest relatives are ATP-driven pumps, not ion channels, and yet its activity as a channel depends on ATP hydrolysis. Gadsby solved this enigma through elegant single molecule studies in which he showed in mechanistic detail how the binding and hydrolysis of ATP control chloride ion flow. Gadsby’s discoveries challenged the perceived dichotomy of pumps and channels. With careful quantitative biophysical analyses, he showed that a continuum exists between them.

“David was a superb experimentalist and scholar who elucidated mechanisms underlying the activity of ion channels and pumps,” says Richard P. Lifton, Rockefeller’s president. “He was a highly respected member of our community for over forty years and he will be sorely missed by his many friends and colleagues at Rockefeller, at Woods Hole, and around the world.”

In addition to his Rockefeller laboratory, Gadsby conducted research with the nerve fibers of squid at the Woods Hole Marine Biological Laboratory in Massachusetts. By placing tiny electrodes inside the squid fibers, which are a thousand times larger than those of humans and can be seen with the naked eye, he was able to measure the flow of ions into and out of the cells under various conditions. He also taught a popular, long-running graduate course in biophysics at Rockefeller and trained dozens of younger physiologists is his laboratory over several decades, many of whom now lead cutting edge discovery toward improved therapy for patients with cystic fibrosis.

“David was a wonderful critic of sloppy thinking,” says A. James Hudspeth, the F.M. Kirby Professor, who knew Gadsby for many years. “His gentle critiques assisted numerous students—and their faculty preceptors—refine their ideas and clarify their presentations.”

Gadsby was born in Cardiff, Wales, in 1947. He received his B.A. and M.A. degrees from Trinity College, University of Cambridge, in physiology and biophysics, and his Ph.D. in physiology from University College London. He joined Rockefeller in 1975 as a research associate in the laboratory of Paul F. Cranefield, was named an assistant professor in 1978, an associate professor in 1984, and professor and head of the Laboratory of Cardiac and Membrane Physiology in 1991. He was also an adjunct professor at Weill Cornell Medicine.

Gadsby received numerous awards including the K.S. Cole Award of the Biophysical Society and the National Institutes of Health MERIT Award. In 2005, he became an elected fellow of the Royal Society. Gadsby was a member of a number of professional societies including the American Heart Association, the Biophysical Society, and the New York Academy of Sciences, and was an elected fellow of the American Association for the Advancement of Science. He also served on the editorial boards of the Journal of General Physiology and Physiological Reviews.

“David was an incredible scientist and a truly wonderful colleague,” says Rod MacKinnon, a close collaborator who is the John D. Rockefeller Jr. Professor. “Scientific discovery excited him, whether made in his own or a colleagues’ lab. We have lost a true intellectual and dear friend.”