Joshua Lederberg, University Professor and president emeritus of The Rockefeller University, died from pneumonia Saturday, February 2, at NewYork-Presbyterian Hospital. An adviser to nine United States presidential administrations, he was a distinguished molecular geneticist whose achievements helped lay the foundation for the current revolution in molecular biology and biotechnology.

Lederberg was a recipient of the 1958 Nobel Prize in Physiology or Medicine, at the age of 33, for his work on the organization of genetic material in bacteria. 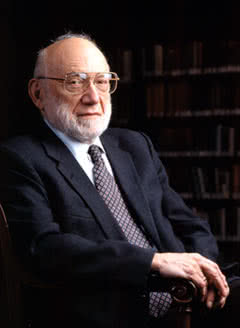 The son of a rabbi, Lederberg was born in Montclair, New Jersey, in 1925, and graduated from Stuyvesant High School in New York City at the age of 15. He received his bachelor’s degree from Columbia College in 1944 and his Ph.D. from Yale University in 1947. He held appointments at the University of Wisconsin and Stanford University School of Medicine before coming to The Rockefeller University as its fifth president in 1978. During his presidency, the university recruited several world-class faculty, created the University Fellows Program, which brought outstanding young scientists to campus, and constructed a major new research building. On his retirement as president in 1990, he returned to research as University Professor Emeritus and head of the Laboratory of Molecular Genetics and Informatics.

Lederberg was a pioneer in the field of bacterial genetics. While at Yale, he made the seminal discovery that a form of sexual reproduction occurs in bacteria, demonstrating that bacteria possess a genetic mechanism, called recombination, similar to that of higher organisms, including humans. He later showed that bacterial genetic material is exchanged not only by conjugation, when the entire complement of chromosomes is transferred from one bacterial cell to another, but also by transduction, when only fragments are transferred. More recently, his work addressed how the activation of genes alters their vulnerability to mutagenesis. In addition, he had interests in genetics, chemistry, evolution and the origin of life; the use of computer models for scientific reasoning; and the application of scientific understanding to direction of research, public health and policy.

Lederberg served in the U.S. Navy and worked on many government advisory committees and boards dealing with research on physical and mental health. He played an active role in the Mariner and Viking missions to Mars sponsored by the U.S. National Aeronautics and Space Administration. He was a consultant to the Arms Control and Disarmament Agency during the negotiation of the biological weapons disarmament treaty, and he continued to advise on national security problems in a variety of capacities including membership on the U.S. Defense Science Board and the Secretary of Energy Advisory Board.

In addition to the Nobel Prize, Lederberg was honored with many awards and prizes, including the National Medal of Science and the Presidential Medal of Freedom. He was also a member of the boards of several foundations, including the Carnegie Corporation, the Revson Foundation and the Camille and Henry Dreyfus Foundation, and he served as chairman of the scientific advisory board of the Ellison Medical Foundation.

His interest in improving communications among scientists, the general public and government policymakers led Lederberg to write extensively for lay audiences, at one time including a weekly column syndicated for several years by The Washington Post on the social impact of scientific progress.