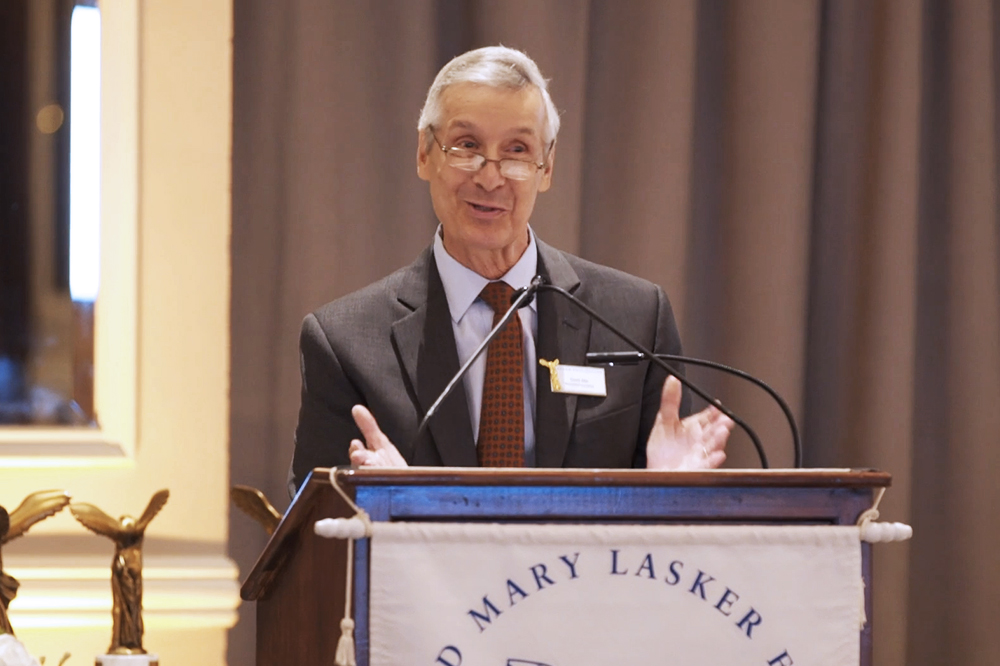 On September 21st, C. David Allis accepted the Albert Lasker Basic Medical Research Award at a time-honored ceremony in New York City, to the ovations of his colleagues, family, and friends. He earned the award, first announced on September 11th, for his innovative research on the modification of histones—proteins that help organize and activate DNA.

Allis, the Joy and Jack Fishman Professor, received the Lasker Award alongside Michael Grunstein of the University of California, Los Angeles. In his acceptance remarks, Allis acknowledged collaborators in his lab that contributed to his work, as well one Rockefeller predecessor that paved the way for histone research.

“The general view that histone modification was a critically important ‘switch’ for gene activation was championed more than 50 years ago by Vincent Allfrey who did all of his work at The Rockefeller University,” he said.

For many years following Allfrey’s discoveries, histones had an unglamorous reputation. They were known to function as biological spools around which long threads of DNA wrap. In this capacity, histones solve the important problem of cramming an enormous amount of genetic material into a very small space. Still, when Allis began studying histones in the early 1980s, they were essentially viewed as packaging material—not the kind of molecules that merit fancy awards.

However, over the course of Allis’s career—and in large part due to his research—the status of histones has soared. More than passive spools, histones have been shown to play an important role in determining which genes are turned on and off. In recent years, histone science has become a critical component of epigenetics, a growing field that investigates different ways in which gene expression can change, and how those changes affect the body.

Allis conducted much of his research using what he called his “secret weapon,” the single-celled organism Tetrahymena. This “pond water critter” helped him understand both the basic biology of histones, and how this biology might be exploited to treat diseases driven by genetic abnormalities.

For example, his lab is currently developing a drug that interacts with histones to combat leukemia. Unlike conventional cancer therapies that simply kill tumors, this form of treatment aims to correct the conduct of cancer cells by turning off genes that encourage destructive behavior. Allis’s lab is also investigating whether this type of treatment could be effective in treating other forms of cancer. “These drugs are helping cancer patients lead healthier lives,” Allis remarked. “Basic research and basic histones do matter.”

Watch clips of Allis’s acceptance speech and an award overview delivered by Rockefeller President Richard P. Lifton during the ceremony.