The Board of Trustees has eight new members 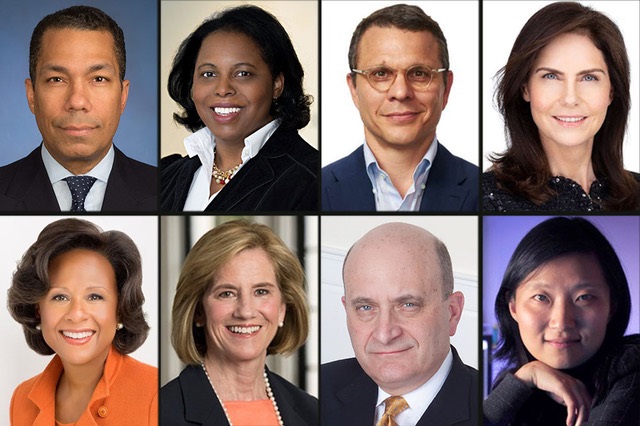 Over the past 12 months, Rockefeller’s Board of Trustees elected eight new members who are leaders in fields spanning basic science, education, healthcare, biotechnology, and finance. These appointments bring a fresh set of skills and perspectives to university leadership and strengthen the diversity of the Board’s 45 members.

“We are thrilled to welcome this remarkable group to our Board of Trustees,” says Richard P. Lifton, Rockefeller’s president. “Their counsel will undoubtedly bolster the university’s mission at this time of extraordinary scientific opportunity and challenge.”

“One of my primary responsibilities is to ensure that university governance remains strong well into the future,” says William E. Ford, chair of the university’s Board of Trustees. “The eight recently elected Trustees will be outstanding fiduciaries, bringing a wide range of talents and skills to help Rick Lifton and Rockefeller’s amazing scientists fulfill their mission of conducting groundbreaking science for the benefit of humanity. We are delighted to welcome them to the university family.”

From left to right in the upper row:

Valentino D. Carlotti, is the newest Trustee, having just been elected at the March meeting of the Board. He is currently head of the Corporate Advisory and Banking practice within Private Banking at Brown Brothers Harriman and has a distinguished history of stewardship of institutions including Carnegie Hall, American Ballet Theatre and Studio Museum in Harlem.

Karen Akinsanya is executive vice president, chief biomedical scientist, and head of discovery R&D at the biotechnology company Schrödinger where she is responsible for preclinical drug discovery and translational research. Prior to Schrödinger, Karen was involved in diverse aspects of drug discovery and development at Merck. She lends her biotech and pharma expertise to Rockefeller’s technology transfer committee.

Eli Casdin is the founder of Casdin Capital, which predominantly invests in early-stage biotechnology companies. He brings to the Board his deep knowledge of disruptive technologies and business models in life sciences and healthcare. The university’s investments and technology transfer committees will both benefit from his counsel.

Rebecca A. John, an established senior executive, is the founder and president of Kintore Partners, a global private equity firm providing early funding for technology and healthcare companies. She serves on Rockefeller’s audit committee, which helps the Board oversee the university’s accounting policies and financial reporting practices.

From left to right in the second row are the four Trustees elected in November 2021:

Paula A. Johnson, is a preeminent physician-scientist and leader in healthcare and education. For many years she was a professor of cardiovascular medicine at Harvard Medical School where she founded the Connors Center for Women’s Health and Gender Biology and served as chief of the division of women’s health in the department of medicine. Since 2016, she has served as the president of Wellesley College. She is an elected member of the National Academy of Medicine and the American Academy of Arts and Sciences. She serves on Rockefeller’s nominating and governance committee, which issues recommendations regarding the elections and nominations of Trustees.

Mary Klotman is a nationally recognized leader in academic medicine. She has worked on the pathogenesis of HIV-1 infection and was chief of the section of infectious disease at Mount Sinai School of Medicine before being recruited to Duke as chair of the department of medicine, where she is now dean of the Duke University School of Medicine and vice chancellor for health affairs at Duke University. She is an elected member of the National Academy of Medicine. She brings her knowledge and experience to the committee supporting the governance of The Rockefeller University Hospital.

Barry R. Sloane has decades of experience in banking and recently retired from his position as chairman, president, and CEO of Century Bank and Century Bancorp, Inc. He has long been involved in charitable activities and organizations. Since 2012, he has served as chairman of the Fisher Center for Alzheimer’s Research Foundation, which generously supports Rockefeller’s Fisher Center for Alzheimer’s Disease Research.  As a Trustee, he contributes his financial and regulatory acumen to Rockefeller’s audit committee.

Xiaowei Zhuang is a world-leading scientist with appointments as the David B. Arnold, Jr. Professor of Science, professor of chemistry and chemical biology, and professor of physics at Harvard University and as a Howard Hughes Medical Institute investigator. She has received numerous prestigious awards, including the Breakthrough Prize in Life Sciences and Rockefeller’s Pearl Meister Greengard Prize for women in science for her pioneering work developing new molecular imaging techniques, including super-resolution microscopy. On the Board, she serves on the committee on scientific affairs, responsible for reviewing the university’s faculty appointments and promotions.

“The members of the nominating and governance committee of the Board faced an incredible challenge during the pandemic—that of identifying exceptional individuals to stand for election to our Board and then to find ways to involve them with our mission within the constraints of COVID,” says Katherine Farley, committee chair. “We are thrilled by the enthusiastic response we received from these eight wonderful new Trustees, and we are deeply grateful to them for joining our Board.  We look forward to working with them in the years ahead.”