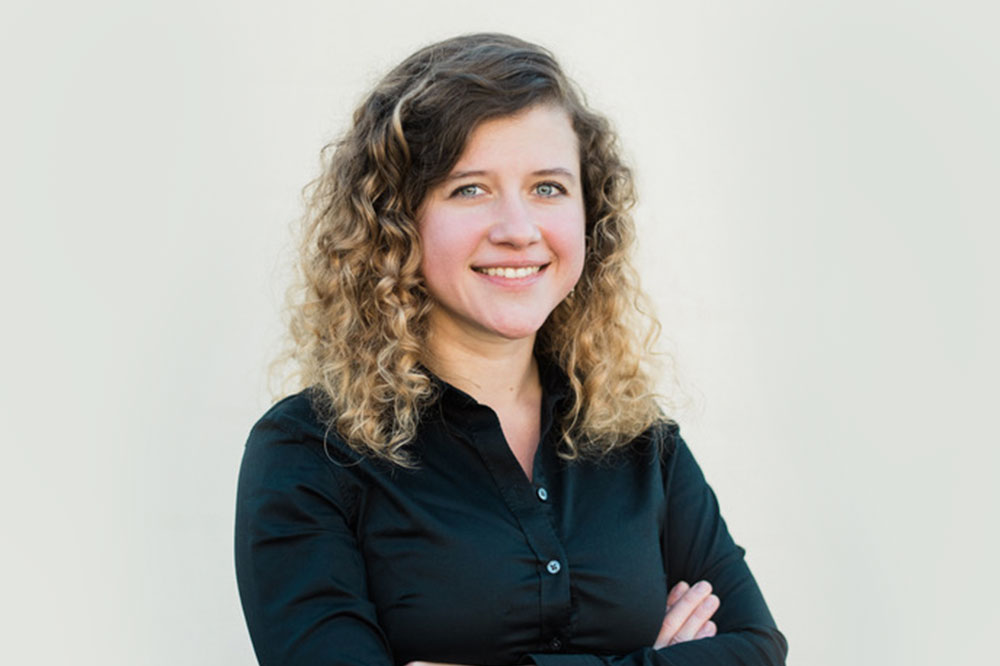 At its most basic level, immunity is about the interactions between proteins. The immune system’s task is to figure out which proteins indicate a threat, and to engineer proteins of its own to neutralize that threat. There are an enormous number of unique proteins, and the interplay between them dictates the success or failure of pathogens, the difference between health and disease. The newest addition to The Rockefeller University’s faculty, Ekaterina Vinogradova, is an organic chemist who designs chemical probes to investigate the functions of immune proteins, with the goal of finding new targets for therapies.

Vinogradova will join Rockefeller January 1, 2021, as a tenure-track assistant professor and head of the Laboratory of Chemical Immunology and Proteomics.

“Modern human genetics has identified many proteins that, when mutated, disrupt immune system function, but the biochemical and cellular roles played by these proteins often remain poorly understood,” says Vinogradova, who is currently a postdoc at The Scripps Research Institute. “I will combine tools from chemistry, chemical proteomics, and cell biology to study the pharmacological landscape and signal transduction pathways in immune related disorders.”

Proteins are composed of amino acids, and different types of amino acids have distinct properties that influence a protein’s shape and function. Although there are hundreds of amino acids in nature, Vinogradova takes a specific interest in cysteine, which can form special bonds that help determine a protein’s three-dimensional structure and therefore its ability to interact with other proteins. Cysteine also plays a critical role in the communication between immune cells. Much of Vinogradova’s doctoral and postdoctoral work focused on developing techniques to dissect and manipulate cysteine’s reactivity.

As a graduate student in Stephen Buchwald’s lab at MIT and in collaboration with Bradley Pentelute’s lab, she developed a method based on organometallic palladium complexes to add structurally diverse organic molecules called aryl groups onto cysteines. Such modifications, which had previously been challenging to achieve, can expand the function of the resulting proteins. Her method has applications in the creation of novel biotherapeutics such as stapled peptides and antibody-drug conjugates.

As a postdoc in Ben Cravatt’s lab at The Scripps Research Institute, Vinogradova recognized a gap in our understanding of the global landscape of cysteines in primary immune cells, which can be targeted with small molecules. To fill this gap, she developed an integrated approach that uses a mass-spectrometry-based proteomics technique called Activity Based Protein Profiling (ABPP) and functional screening to globally map reactive cysteine residues in proteins in primary human T cells. The ABPP technique takes advantage of the fact that a reactive cysteine has spare electrons that it can share with an electron-deficient partner (known more generally as an “electrophilic” molecule), forming a stable bond between them in the process. This same property makes cysteines powerful sensors of the increased levels of reactive oxygen molecules that occur as T cells spring into action during an immune response.

Vinogradova’s work revealed that cysteine reactivity to an electrophilic probe can serve as an indicator of molecular level changes associated with T cell activation. The binding of electrophilic compounds to cysteines can also impair a protein’s activity and, in some cases, trigger its destruction. The work provides an atlas of cysteines in T cells that could potentially be targeted by small molecules, which could be harnessed to design drugs that activate or repress T cells.

“This study highlighted to us that electrophilic compounds produce powerful effects on T cell biology and elucidating the targets of these small molecules has the potential to identify key druggable nodes within complex immune signaling networks,” Vinogradova says. “These results may ultimately provide a means to create drugs that impact pathological functions of immune cells.”

At Rockefeller, Vinogradova plans to expand this line of research, and will explore the cysteine reactivity of other cell types both within and beyond the immune system. She aims to better understand the molecular differences between pathologic and physiologic cell states and how those differences can be further leveraged from a pharmacological perspective. One of her goals is to profile the reactivity of cysteines in two types of brain cells implicated in multiple sclerosis: microglia and oligodendrocytes.

“There is a growing appreciation of cysteine residues that can be targeted with small molecule electrophiles, but our ability to identify sites that can be selectively engaged in one cell state over another and to predict which of these target engagement events will produce an effect on protein function is still limited,” Vinogradova says. “Understanding these details will be important for the discovery and optimization of ligands with immunological activity.”

Another goal of her lab is to develop chemical methods to dissect and manipulate other types of amino acids, such as tyrosine, which is important in cell signaling. These advanced chemical probes will facilitate studies of the molecular pathways involved in immune regulation in healthy state and disease and can serve as lead compounds for the development of new therapies.

“Katya cleverly integrates novel tools she has developed from chemistry with proteomics, and cell biology to address fundamental questions in immunology and neuroscience, paving the way for new therapeutics,” says Richard P. Lifton, Rockefeller’s president. “She is going to be a great addition to our faculty.”

Vinogradova credits her mother and her high school teachers for inspiring her interest in chemistry. A native of Russia, she studied chemistry at the Moscow Chemical Lyceum, a high school dedicated to education and hands-on research experience in chemistry. Her undergraduate and master’s degrees are from the Higher Chemical College of the Russian Academy of Sciences. She spent summers working as an intern in academic research labs across the United States, Switzerland, and France. She began her Ph.D. studies at MIT in 2010. She moved on to postdoctoral training at Scripps as a Pfizer Fellow of Life Sciences Research Foundation in 2015.