First, we are following out the implications of the transcriptome discovered by Inna Tabansky in our lab (PNAS, 2018).  Among all the neurons in the brain, Inna’s NGC neurons are the only ones which express endothelial nitric oxide synthase, eNOS (Figure CMB 1). These neurons might have the capacity to control their own blood supply. And, conversely, some of these neurons have processes plastered against the neighboring blood vessels without a blood brain barrier.  It is possible to generate predictions about the behavior changes consequent to selective manipulations of these cells.

Especially interesting will be manipulations of a subgroup of NGC neurons which express the hox gene Chx10 during development and become glutamatergic neurons.

Second, Ana Maria Magarinos in the lab is using a new approach, EDU (supplants the older BRDU) for terminal labeling of NGC neurons during development. For example,  we are quite sure that NGC neurons are born on both the alar and the basal plates of the cerebral ventricle, but we don’t know whether neurons born at different times end up in different functional positions or develop different patterns of connections within the brain. 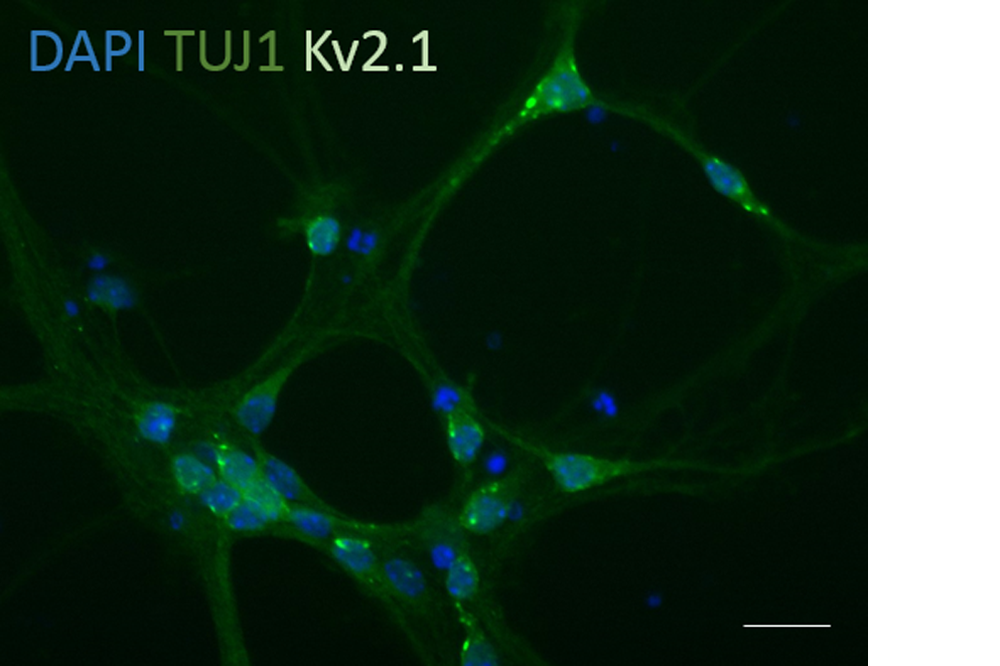 As well, Ana Magarinos is doing the histochemical experiments measuring the expression of the Kv2.1 gene in NGC neurons – – these experiments mirror the electrophysiological work described in that Box. Expression of Kv2.1 gene does go up from postnatal day 3 to day 6, as predicted by Lee-Ming Kow’s theory, and also is correlated with action potential trains in cultured NGC neurons (J. Comparative Neurology, in preparation).