The study participants continued to improve their antibodies months after initial infection, potentially due to exposure to the remnants of the virus hidden in the gut.

The virus must hijack a more than a hundred human proteins to replicate inside a cell. One of them stands out because it is an absolute requirement for infection by four different coronaviruses as well as by viruses that cause Zika, yellow fever, and other diseases.
Awards and Honors

Rice was honored for research that contributed to a cure for hepatitis C. He accepted the Nobel medal and diploma at the Swedish Consulate in New York City.
Campus News

Marina Caskey is promoted to professor of clinical investigation

Caskey, a clinician in the lab of Michel Nussenzweig, has spent the last decade working on clinical studies of experimental immune-based vaccines and therapies.
Campus News

The $675 million Campaign for the Convergence of Science and Medicine, launched July 1, 2019, aims to fulfill the priorities identified in the university’s 2020-2024 strategic plan.
Science News

What bats can teach us about COVID-19

Unlike most humans, bats are naturally resistant to coronavirus infection. Researchers are now searching their genomes for clues that might explain why SARS-CoV-2 can cause devastating disease in our own species.
Science News

Researchers have found the first evidence that telomere shortening is not just a sign of aging, but a key component of the body's cancer prevention system.
Seek Magazine

Some cells are multilingual

Experiments in zebrafish are shining light onto a poorly understood process in which cells communicate mechanically, by pushing and pulling on each other.
Science News

Conservation of resources is hardwired into the genetic code

A study of marine microbes reveals that conservation of nutrients is a fundamental property of cells in all living organisms, from plants to humans.
Science News

Researchers have launched a tremendous race to understand the new virus and attack it from every angle. How they work and collaborate might never again be the same.
Previous
Next
Previous
Next

Cao is recognized for his work using single-cell genomic methods to enable developmental mapping of entire organisms, described in an essay published in Science.

Rockefeller in the News

Laboratory studies from Michel Nussenzweig and others of mutations circulating in South Africa suggest they may dodge some of the body’s immune responses.

Companies Race to Develop Drugs That Stay Ahead of Coronavirus Mutations

Researchers are working on new antibody drugs that can be given with quick jabs in the arm, similar to flu shots. They would enable patients to get treated quickly after being diagnosed with Covid-19, said Michel C. Nussenzweig, an immunologist and professor at Rockefeller University in New York.

Evidence from Jean-Laurent Casanova and others is growing that self-attacking ‘autoantibodies’ could be the key to understanding some of the worst cases of SARS-CoV-2 infection. 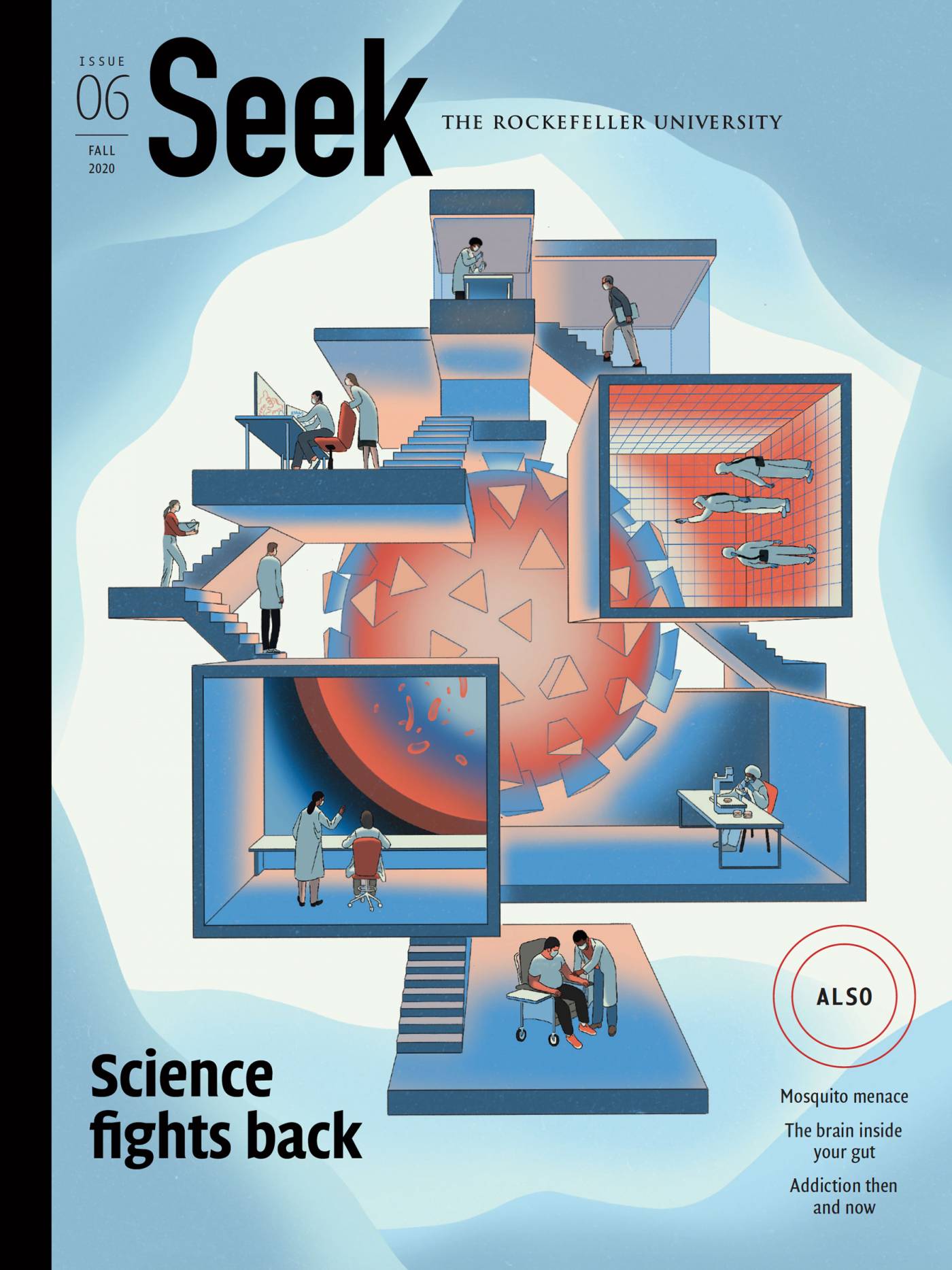 Rockefeller’s flagship publication is interested not just in scientific results, but in the people, ideas, and conversations that ignite discovery. The latest issue takes us inside the response to the pandemic, where scientists are using every tool in the 21st century playbook to transform COVID-19 into a manageable disease. Also: Mosquito menace, The brain inside your gut, and Addiction then and now.

It takes a certain kind of person to make kids from all backgrounds feel at home in the world of science. And sometimes you have to dance on the internet.

The #COVID19 pandemic has called attention to many of the root causes underlying health inequities and disparities in our society. Join #rutalkingscience today to learn how science can be used to provide everyone with a fair and just opportunity to be as healthy as possible. Register here: bit.ly/359xN2l ... See MoreSee Less

Scientists in the Brivanlou lab have developed stem-cell technology to mass-produce tissue cultures resembling our breathing organs. These tissues offer a powerful model to study how SARS-CoV-2 wreaks havoc in the lungs and to screen for new drugs. #Rockefellerscience ... See MoreSee Less

COVID-19 causes a host of diverse complications, from lung inflammation to blood clots, heart failure, and brain fog. The Strickland lab believes these attributes may have a single culprit—and that findings from research on Alzheimer’s disease might give them a leg up in finding it. #RockefellerScience ... See MoreSee Less

In 1908, 113 years ago this week, Rockefeller Institute director Simon Flexner published a paper that would eventually save millions of lives. Meningococcal meningitis had killed thousands in a worldwide pandemic only a few years previously, and Flexner had since worked tirelessly to perfect an antiserum derived from infected horses. When he injected the antiserum directly into the fluid that bathes the spinal column, he observed patients recovering from a disease that, at the time, had a death rate of 75 percent. "While the number of patients treated with serum is still small yet the results on the whole indicate that it may be possible to produce serum that may have more or less beneficial influence on the course of the disease," Flexner wrote, in the Journal of the American Medical Association. "Of the forty-seven patients with meningitis treated in various places with the serum prepared by Flexner and Jobling thirty-four recovered and thirteen died. Eliminating four cases, in which the disease was either fulminant or the patient's condition so extreme that death occurred in a few hours after the injection of the serum, the death rate becomes 20.1 per cent." It was the overwhelming success of Flexner's meningitis therapy that would inspire John D. Rockefeller, Sr. to pledge funds that very year to build the Rockefeller Hospital in New York City.

A study from the Nussenzweig lab shows that the immune system mounts lasting defense after recovery from COVID-19. The study participants continued to improve their antibodies months after initial infection, potentially due to exposure to the remnants of the virus hidden in the gut. #Rockefellerscience ... See MoreSee Less

The #COVID19 pandemic has called attention to root causes underlying health inequities and disparities in our society. Join #RUTalkingScience today to learn how science can be used to provide everyone with a fair and just opportunity to be healthy: https://t.co/oL8IelJ6Eh

Here it is! The most important olfaction paper in 30 years since the 1991 Buck & Axel cloning of odorant receptors. Josefina del Marmol and Vanessa Ruta @RockefellerUniv show... 1/4

Congratulations to our graduate student Alice Gadau @RockefellerUniv on the @sse_evolution Rosemary Grant Advanced award! So happy for her and all the awardees. Thank you @sse_evolution for your generous support to early career scientists. https://t.co/vYBaGE3wB6

On Monday @RockefellerUniv will be hosting its second session of Talking Science. Tune in as Dr. Chibuzo U. Enemchukwu delivers a talk on "Using Science to Advance Health Equity".

Scientists in the @BrivanlouLab have developed stem-cell technology to mass-produce tissue cultures resembling our breathing organs. These tissues offer a powerful model to study how SARS-CoV-2 wreaks havoc in the lungs and to screen for new drugs.
https://t.co/bPVMXXqEd5

Scientists in the @BrivanlouLab have developed ste

A study from the #SimonLab shows that the nuclear First snow of the season spotted at Rockefeller! New research from the Victora and Mucida labs sugg

A celebratory group photo of the Rice Lab! Congrat

Researchers in the #FuchsLab studying two forms of

Did you know Rockefeller has a monthly science newsletter? Subscribe now to stay on top of the latest discoveries, news updates, and science highlights from Rockefeller’s laboratories and researchers.

Faculty at The Rockefeller University are authoritative sources on a range of topics across the biomedical sciences. For media inquiries, please contact Katherine Fenz.