Tiny machines, which convert chemical energy into mechanical work, drive nearly all aspects of life within a cell. Shixin Liu, a biophysicist and Rockefeller’s newest tenure-track faculty member, investigates how these individual motors interact, and, in many cases, cooperate with one another to accomplish critical tasks, such as DNA transcription and gene regulation. 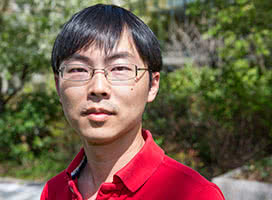 “Over the years, a growing number of biological machines have been investigated in great detail. We know that these machines are often coupled to one another in time and space, giving rise to new functions and new forms of regulation. Yet, little attention so far has been paid to the molecular mechanism of this interplay,” Liu says.

Liu, currently a postdoc at the University of California, Berkeley, will join Rockefeller on January 1, 2016, and will establish the Laboratory of Nanoscale Biophysics and Biochemistry. Liu’s research will chiefly use single-molecule techniques to study the interactions among molecular motors involved in gene expression both in simpler bacterial systems and in more complex eukaryotic cells, like those of humans. Ultimately, he intends to explore how motor-driven processes involved in gene expression are integrated into a coherent network within the cell, and how their interplay evolves in response to environmental changes during both normal physiology and disease.

Liu did his Ph.D. research in Xiaowei Zhuang’s lab at Harvard, and postdoc work with Carlos Bustamante at UC Berkeley. During his training, he established an expertise in the two primary classes of methods for detecting and manipulating single molecules: fluorescence spectroscopy, in which molecules of interest are tagged with light-emitting fluorophores and their movement tracked, and force spectroscopy, which probes the mechanical characteristics of molecular motors by applying force or torque to these nanometer-scale engines. Unlike most traditional methods that report the average property of many molecules, single-molecule approaches monitor the action of biological complexes one at a time, thus revealing their individual characteristics and behavior. Moreover, these approaches can provide real-time, dynamic information about biological reactions, information that was otherwise difficult to obtain.

While at Harvard, Liu’s projects included examining the movement of HIV reverse transcriptase, the target of many anti-AIDS therapies, as it makes a DNA copy of viral RNA. During his postdoc, Liu studied how certain viruses, such as those that cause herpes, use a common type of ring-shaped molecular motor to pack their genetic material in a protective protein shell during viral assembly. He found that this motor coordinates the activities of its subunits in a highly controlled, yet adaptable manner. This discovery represented a new paradigm for understanding the operation of ring motors.

At Rockefeller, his research will investigate the fundamental gene expression process, during which a series of molecular machines act in concert to transcribe DNA code into RNA, and then translate RNA into protein. He is interested in interactions among the molecular machines responsible for the synthesis, translation, and degradation of messenger RNA in bacterial cells. Liu also plans to study how the DNA transcribing enzyme known as RNA polymerase reads through nucleosomes, the DNA-organizing units found in eukaryotic cells, and how this process is regulated by additional factors and epigenetic modifications. In addition to single-molecule biophysical tools, Liu will also leverage the power of modern biochemical and genomic approaches to elucidate the molecular mechanism of these complex processes.

“At Rockefeller, Shixin will join a long tradition of examining the molecular processes involved in gene expression, and I believe his particular approach of exploring the interplay between the motors responsible will contribute a unique perspective to the basic biology of gene regulation, as well as uncover implications for health and disease,” says Marc Tessier-Lavigne, the university president. “I am delighted to welcome Shixin to our community, and I anticipate seeing great things from him as his career develops.”

A native of China and the child of two biology teachers, Liu studied biology at the University of Science and Technology of China. His entry into the field coincided with a shift in the approaches taken by biologists. “I grew up in a period when biology really started to be understood in a quantitative or analytical manner, not just as a descriptive science,” he says. “I was drawn to the idea of applying approaches from physics, chemistry, or mathematics to explore the fundamentals of biology. Work at the interface between these diverse disciplines will naturally bring together people with varied expertise and spark novel approaches to uncovering the secrets of life.”

Cell division is critical to creating and sustaining life. It’s also incredibly difficult to study. Now, advanced technology is enabling researchers to take their understanding of this process to the next level.

Researchers have discovered how bacteria manage to destroy enemy DNA, while keeping their own genetic material safe.