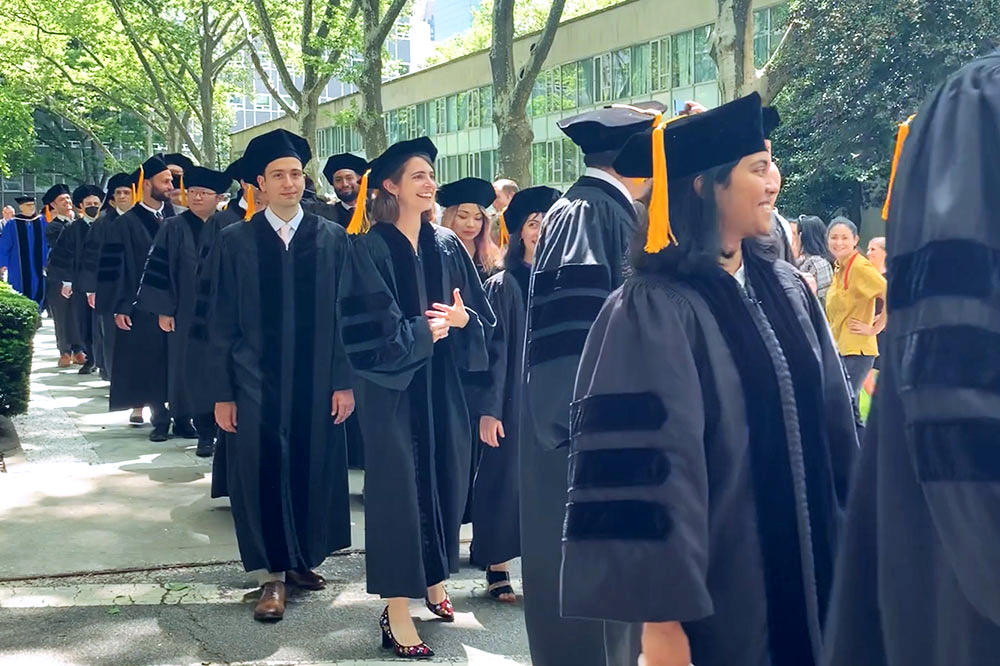 Forty students received Rockefeller Ph.D.s on June 9 at the university’s 64th convocation. After two years of virtual celebrations, in a custom dating back to 1959, the students and their Ph.D. mentors lunched together in the Great Hall of Welch Hall, then marched down the campus’s marble pathways in a joyful cap-and-gown procession that concluded with a ceremony in Caspary Auditorium, where each graduate was presented for the degree by their mentor.

During the ceremony, honorary degrees were awarded to Anthony S. Fauci and Katalin Karikó, who have both played critical roles in combatting the COVID pandemic, as well to Trustee Emeritus, Lulu C. Wang, a longtime Rockefeller supporter.

Anthony S. Fauci, who accepted his honorary degree via videocast, was recognized as an extraordinary leader in biomedical research and national public health. He is the director of the National Institute of Allergy and Infectious Diseases and chief medical advisor to the President of the United States. At NIAID, where Fauci has been in leadership since 1984, he has ably led the institute’s fight to prevent, diagnose, and treat many of the greatest challenges to global public health, including infection with the HIV and SARS-CoV-2 viruses. In addition to spearheading NIAID’s role in combatting HIV and COVID, he shepherded the public through numerous other health challenges, including the anthrax scare of 2001 and outbreaks of swine ﬂu, Ebola, and Zika.

“The world you are graduating into is a wounded and changed world from a few years ago, and one that is still recovering. However, I’m confident, based on Rockefeller’s impressive legacy of outstanding scientists, that many of you will play leadership roles in science similar to those of your Rockefeller mentors,” said Fauci.

For four decades, the research of Katalin Karikó, senior vice president at BioNTech and adjunct professor of neurosurgery at the Perelman School of Medicine at the University of Pennsylvania, has focused on the use of messenger RNA (mRNA) for therapeutics and vaccines. She discovered how to overcome the potentially lethal inflammatory response caused by synthetic mRNA that had precluded its use in humans. With immunologist Drew Weissman, she discovered that synthetic mRNA could be prevented from activating the innate immune system by replacement of uridine with pseudouridine, a modification found in transfer RNAs. They also demonstrated that such modified mRNA formulated with lipid nanoparticles can be a potent vaccine. Karikó’s foundational discoveries laid the groundwork for the rapid development of mRNA vaccines that have saved millions of lives during the COVID pandemic.

“I am deeply moved, and I am deeply honored and very grateful to The Rockefeller University for giving me this honorary doctorate degree,” said Karikó. “It is a wonderful feeling to be recognized for my work. I am humbled, excited, and have a deep sense of appreciation.”

Lulu C. Wang,  a Rockefeller Trustee Emeritus also received the honor. She has served on the Board’s Executive, Hospital, and Investment committees, as well as the Nominating and Governance Committee, which she chaired from 2013 to 2020. Under her chairmanship, 21 trustees were elected to the university’s Board. She is also a leader in Rockefeller’s Women & Science initiative.

A pioneer in the financial world, Wang established a successful career in a male-dominated industry. She is the founder and CEO of Tupelo Capital Management and widely recognized for changing the landscape of Wall Street. She has similarly forged new paths in philanthropy, urging women to assume leadership positions in the organizations they choose to support.

“We are here for a guiding mission at Rockefeller, and that is science for the benefit of humanity,” said Wang. “And for me, as a trustee, it’s been a wonderful privilege to serve, and to have a small role in advancing this important and very inclusive mission.”

During the presentation of degrees, Sidney Strickland, who is stepping down from the role of Dean of Graduate and Postgraduate Studies after 20 years in the role, received a standing ovation. Strickland has overseen the graduate careers of 622 Rockefeller Ph.Ds.