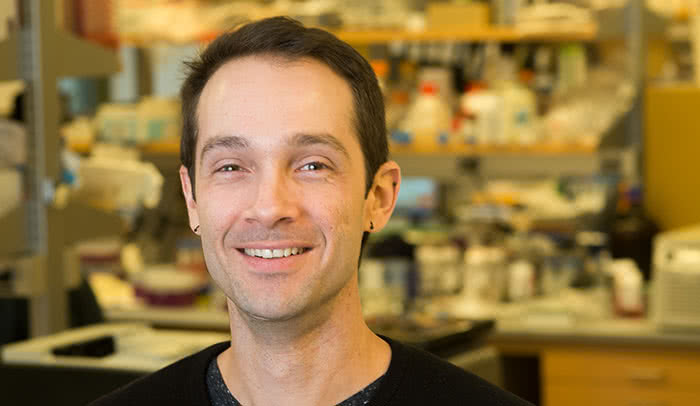 Essential nutrients, benign bacteria, and deadly pathogens all share one common point of entry into the human body—the gut. There, in the digestive system, the body picks through its latest meal, scrutinizing foreign material to distinguish nutrients from harmful microbes.

Much can go wrong in this process. We may get sick because the body fails to expel invaders; we may develop severe allergies as immune processes activate against perfectly harmless foods. Daniel Mucida, an immunologist who studies the interplay between tolerance and resistance in the intestinal mucosa, is unlocking the secrets of the digestive system’s delicate balance and answering fundamental questions about diseases from irritable bowel syndrome to colorectal cancer.

Mucida, who joined Rockefeller as assistant professor in 2010 and was named associate professor in 2016, has been granted tenure and promoted to professor. He is head of the Laboratory of Mucosal Immunology.

“The tools and specifics have changed over time, but the question that drives my research has always remained the same,” Mucida says. “How do we balance the incorporation of foreign nutrients into our bodies with the need to prevent rare pathogens from causing disease?”

Mucida’s fascination with intestinal immunology stretches back to his college years in Brazil, where his undergraduate work contrasted how microbes and diet stimulate the development of the immune system. As a Ph.D. student and postdoc, he went on to study oral tolerance, investigating how the immune system allows foreign matter—food—to enter our digestive systems unperturbed.

Upon arriving at Rockefeller, Mucida launched several lines of research with powerful implications for human disease. For example, he and his colleagues are exploring how the digestive system simultaneously assimilates food while mediating resistance to pathogens, and how errors in this process may contribute to celiac disease and food allergies. In recent work, the lab found that the intestinal region known as the ileum, which has the greatest exposure to pathogens, is also more prone to develop resistance, while a separate region, the duodenum, where nutrients are absorbed, may induce food tolerance.

Mucida’s lab is also studying the immune cells that line the intestine. Innovative imaging techniques have allowed them to identify the specific cells that suppress inflammation in the intestine. Because the epithelial layer of the gut is roiled by the constant abrasion of digestion, he suspects that a breakdown within the immune cells that suppresses inflammation may result in mysterious inflammatory bowel conditions such as Crohn’s disease.

Moreover Mucida has begun studying the intersection of neuroscience and immunology, investigating the so-called gut-brain axis where immune cells and gut-based neurons interact (read more about this phenomenon in this recent interview with Mucida in Seek). Members of the lab are also asking why animals avoid eating foods that contain proteins to which they are allergic and how white blood cells interact with gut neurons.

“The interactions among intestinal microbes, gut epithelial cells, resident immune cells, and innervating neurons are incredibly complex, and many would consider it folly to try to understand the gut’s behavior by in vivo experimentation. But because Daniel has proved to be a fearless, brilliant, and incisive experimentalist, his studies have provided fundamental insights into the normal and disease-related activities of the GI tract. He is very deserving of his promotion to tenured professor,” says Richard P. Lifton, the university’s president. “His insights have profound implications for understanding GI pathologies including chronic inflammatory diseases, food allergies, and colorectal cancer.”

Going forward, Mucida will continue to investigate how the delicate balance of the digestive system keeps us healthy—and what exactly happens when it tilts too far. Further investigation of the gut-brain axis holds particular promise. Having recently discovered that white blood cells known as macrophages protect intestinal neurons from damage due to inflammation, researchers in the lab are now excited to find out what this means—including the possibility that a dysfunctional relationship between neurons and immune cells may lie at the heart of many digestive diseases.

“What brought me to Rockefeller was the overarching question of how tolerance versus resistance works in the intestine, and its consequences for the immune system” Mucida says. “Even now, every question the lab is studying has its origins in human biology and is rooted in the hope of reducing human disease.”