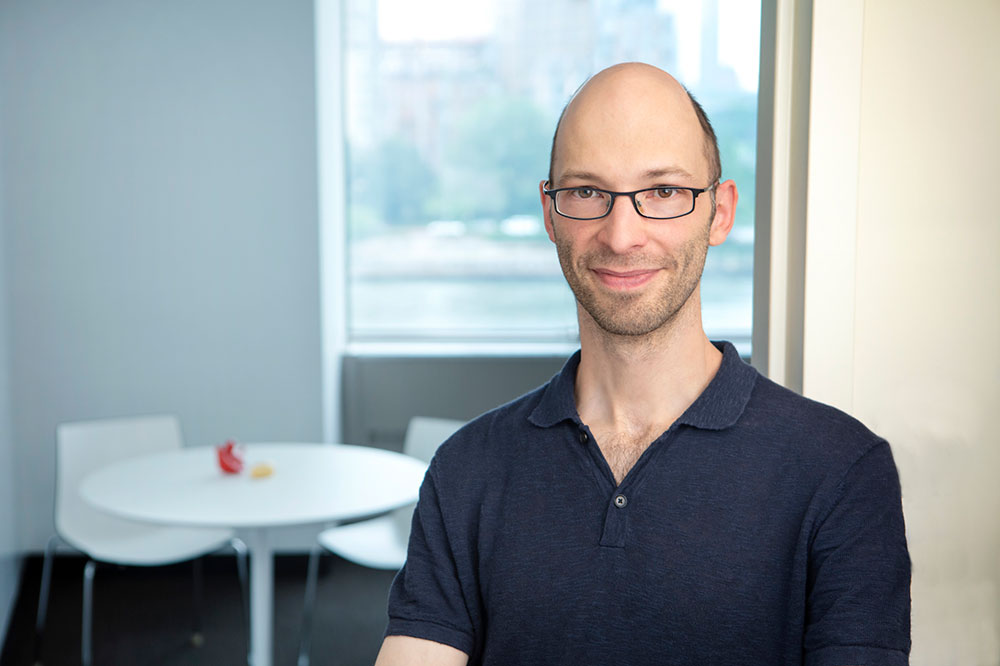 Ribosomes, first discovered at Rockefeller seventy years ago, are giving up some of their last secrets. Thanks to the power of cryo-electron microscopy, researchers are beginning to understand how these complex and critical machines—the assembly factories where proteins are constructed within cells—are themselves assembled.

Rockefeller’s Sebastian Klinge, who joined the university in 2013 and has been on the forefront of this work, spending the last six years acquiring dramatic snapshots that reveal how ribosomes are assembled, was promoted to associate professor July 1.

Over 200 factors must work in a precise and coordinated manner to build ribosomes from segments of RNA and other proteins, and most are essential. Because of their complexity and dynamic nature, ribosome assembly processes are notoriously difficult to study. But using yeast genetics with novel biochemical tools, x-ray crystallography, and cryo-electron microscopy, the Klinge lab has helped transform what began as a laundry list of components into frames of a movie that depict the sequence of events that results in functional ribosomes.

“When I came to Rockefeller it was a completely fresh start—I wanted to step back to the very beginning of this pathway and figure out what the amazing mechanism is that builds these machines from scratch,” says Klinge. “When I arrived, I only had two yeast strains. Now we have hundreds.”

Starting at the beginning, Klinge focused on the transcription of ribosomal RNA, the very first step in ribosome assembly. His laboratory used RNA transcripts of varying lengths to mimic the stages of transcription, creating a time course that describes the order by which 70 factors become involved in the early assembly process.

Next, the Klinge lab moved onto visualizing the assembly process in three dimensions. If the assembly process was a movie, the major challenge is hitting pause for long enough to capture all of the intricate details about the conformations of the molecules involved. In previous experiments, by chance, Klinge and colleagues found that starving yeast naturally freezes ribosome assembly at a specific point. This allowed the scientists to determine the structures of ribosome assembly intermediates at this timepoint, using cryo-EM.

Rockefeller acquired the first of its cryo-electron microscopes in 2014. “The cryo-EM revolution came along at exactly the right time for us,” says Klinge. “Our collaboration with the community at Rockefeller pushing this technology was a big factor in our success—there is no way we would have been able to do this by ourselves.”

As the ribosome comes together, it’s comprised of two subunits, one small and one large. Klinge’s team produced structures of both ribosomal subunits while they’re in the process of being assembled at the highest resolution yet available. The images revealed critical information about ribosome construction, and in some cases prompted Klinge and his team to re-evaluate the conventional wisdom on how the two components are made.

“Initially, we thought of the small subunit as a product on an assembly line, with molecular workers arriving from outside,” says Klinge. “But that analogy no longer appears apt. Instead, we see integral components of the particle—protein complexes and RNA—constructing and organizing from within, before the outer layer peels away.”

Although the work is big step forward, it’s only one frame of the film, leaving much for Klinge to work on moving forward. Using the right mix of chemical biology, biochemical methods, and some genetics, he hopes to trap the molecules at other intermediate stages of their assembly, filling in additional frames and eventually unveiling what role each of the remaining factors plays—information that may have implications for human health and disease.

“Sebastian has effectively established an ambitious research program to elucidate the mechanisms by which eukaryotic ribosomes are assembled,” says Richard P. Lifton, the university’s president. “Not surprisingly, given the essential role of ribosomes in every cell, inherited and acquired mutations in ribosome assembly and function underlie a wide variety of diseases ranging from severe developmental abnormalities, to anemia, to cancer predisposition.”