Tradition and exuberance will be on equal display at The Rockefeller University this afternoon when the community celebrates its new graduates—30 men and women who have earned their doctoral degrees in bioscience. In a custom dating back to 1959, the students and their Ph.D. mentors will lunch together beneath the art-deco chandeliers of the Great Hall of Welch Hall, then stride across campus in a cap-and-gown procession culminating in a ceremony at Caspary Auditorium, where each graduate will be presented for the degree by his or her mentor.

During the ceremony, honorary degrees will also be awarded to Susan Solomon and Robert Tjian, both distinguished scientists and science advocates, as well as to Richard E. Salomon, Vice Chair of Rockefeller’s Board of Trustees. 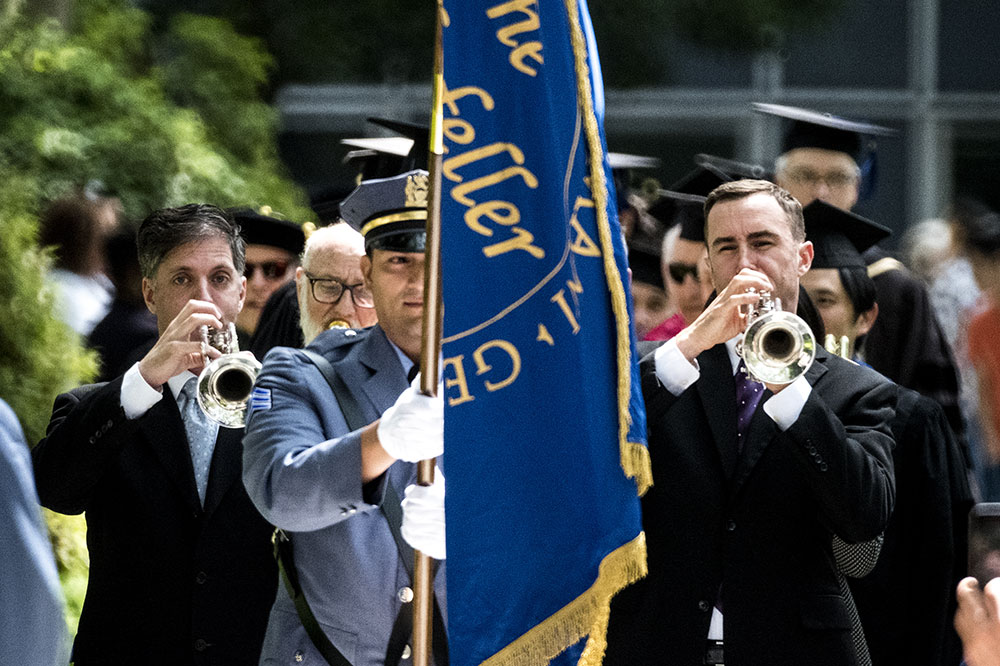 A pioneer in research on humanity’s role in climate change, Solomon is currently the Lee and Geraldine Martin Professor of Environmental Studies at MIT and served most of her career at the National Oceanic and Atmospheric Administration. She and her colleagues were the first to pinpoint the environmental causes creating the ozone hole over Earth’s polar regions. Their discoveries led to the adoption of the 1987 Montreal Protocol, which helped heal the ozone layer by limiting industrial production of chlorofluorocarbon and other ozone-depleting substances.

Tjian, who is professor of biochemistry and molecular biology at the University of California, Berkeley, and a former president of the Howard Hughes Medical Institute, has spent four decades researching gene regulation, the processes that allow cells to activate the right sets of genes at the right time. He devised methods to isolate the cellular components tasked with switching genes on or off, and then recreate their interactions in a test tube—work that provided unprecedented insights into the molecular mechanisms that power gene regulation. Tjian has also been a strong advocate for government support of basic science.

A member of the Board since 1984, Salomon is among the longest-serving Trustees in the university’s history. He has advised eight Rockefeller presidents, served on three executive committees, and helped strengthen virtually every aspect of the university’s operations. Among other initiatives, Salomon helped create a professional investment office to manage Rockefeller’s endowment. He is a managing partner of East End Advisors, an investment advisory firm, and has served on the boards the Museum of Modern Art, the Council of Foreign Relations, and a number of other institutions.

During the Convocation ceremony, Rockefeller faculty commended their students for their scientific contributions, untiring work, and unique skills. Here are the congratulatory tributes given to each of the 2016 graduates (including students in the Tri-Institutional M.D.-Ph.D. Program, denoted with an asterisk). [ezcol_1half id="" class="" style=""]Rachel L. Belote Daniel Blanco Melo…...

The world-renowned David Rockefeller Graduate Program in Bioscience trains a select group of students in the biomedical sciences, chemistry, and biophysics.