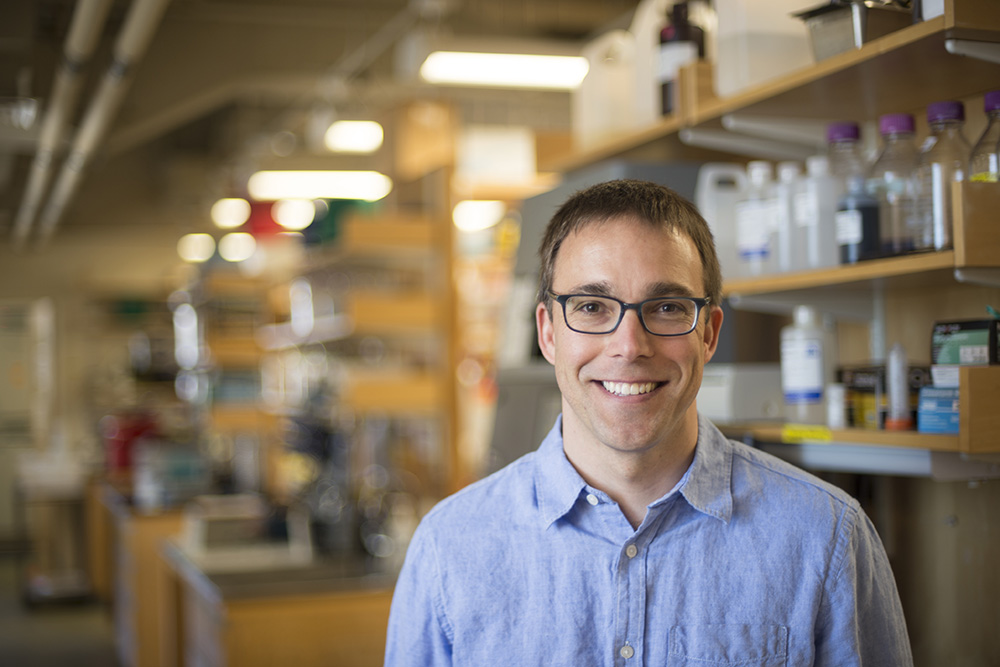 An ancient threat, tuberculosis is alive and well in the modern world. The most recent addition to Rockefeller’s faculty, Jeremy M. Rock, uses genetics to study the bacterium responsible for this enduring, deadly disease, with the goal of generating new, more effective treatments for it. Rock will join the university on January 1, 2018, as a tenure-track assistant professor and head of laboratory.

Until recently, scientists haven’t been able to efficiently study how genes endow the bacterium, Mycobacterium tuberculosis, with the ability to cause this dangerous disease. Rock has developed new tools customized for the bacterium, which his lab will employ to investigate a number of questions that were previously off-limits.

“The treatments now available for tuberculosis have made a tremendous difference, but we are nowhere near where we need to be if we are ever going to control this disease,” says Rock, who is currently a postdoc at the Harvard T.H. Chan School of Public Health. “By uncovering the mechanisms that enable this disease, my lab will seek to provide the basis for innovative new therapies.”

A new way to study an old bug

M. tuberculosis has plagued humanity for millennia; traces have even been recovered from Egyptian mummies. Although today we have antibiotics and a vaccine, neither is fully effective, and the tuberculosis bacterium ranks as the most deadly single cause of infectious disease, especially among the poor, who are more likely to contract it and have less access to treatment.

A major concern is antibiotic resistance—the ability of the M. tuberculosis bacterium to overcome medications by acquiring mutations. As a postdoc in the labs of Sarah Fortune and Eric Rubin at Harvard, Rock set out to investigate how the microbe controls the rate at which these mutations occur. He discovered a previously unseen mechanism by which M. tuberculosis proofreads strands of its DNA when replicating. He later found that many other bacteria use the same strategy to control mutation, suggesting it is the ancestral form of proofreading.

He also adapted a gene-editing technique—CRISPR—to work in M. tuberculosis, a key development that allows scientists to alter individual genes in order to study their function.

The standard regimen for treating tuberculosis requires that four antibiotics be taken over a period of at least six months. Even if a patient follows the protocol to the letter, there remains an approximately 10 percent chance the disease will come back after the medication is stopped. The bacterium can lie in wait, dormant for years, and the antibiotics are primarily effective only when their targets are active.

“The biology of this dormant state is really a black box,” Rock says.

To see inside, Rock wants to use his modified CRISPR system to determine the genetic program behind this dormancy. The genes responsible could, he hopes, serve as targets for new therapies and result in shorter, more effective courses of treatment.

Rock is also interested in the interactions between genes targeted by current antibiotics. A better understanding of how one gene’s activity affects another’s could be used to determine more effective combinations of drugs and to reduce the emergence of drug resistance.

In addition, his new lab will investigate the function of a mysterious portion of the bacterium’s genome—about 75 percent of which does not appear essential to the microbe’s ability to grow within its host. Rock and others believe these genes are likely redundant, but involved in disease nonetheless. By inactivating multiple genes at once to eliminate the effects of such redundancy, Rock intends to systematically search for families of genes critical to causing tuberculosis.

“Jeremy’s research will greatly advance the understanding of tuberculosis, setting the stage for new therapeutics. His work exemplifies our mission at Rockefeller to use basic science to reduce suffering, prevent, and effectively treat disease,” says Richard P. Lifton, the university’s president. “Jeremy brings great energy and intellect to his work; he will be a terrific asset to our scientific community, and to the global effort to eradicate tuberculosis infection.”