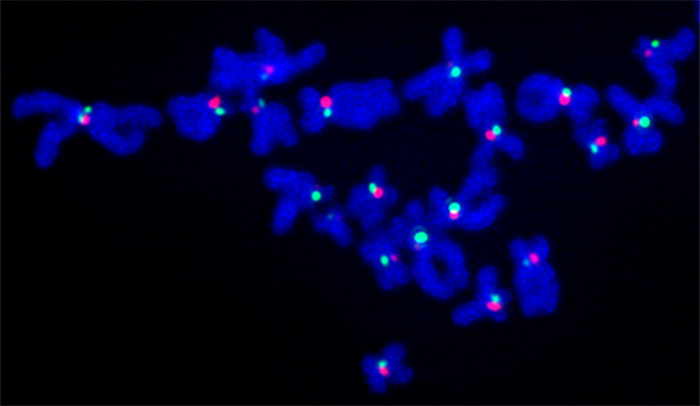 Parent DNA strands and their daughter strands were marked with different colors (red and green). In some cancer cells, scientists found that chromosomes had swapped DNA, resulting in a mix of colors.

As cells divide, some of their DNA is rearranged, spurring the emergence of new traits that can dictate whether a species survives or flounders. But some stretches of DNA appear to be so crucial to the basic functioning of the cell that they must be preserved. So what keeps these sections intact from one generation to the next?

Focusing on a region of our chromosomes called the centromere, Rockefeller scientists have identified the factors that prevent its DNA from being scrambled. Their findings, described in the Proceedings of the National Academies of Sciences, may help explain why centromeres—which play a crucial role in segregating chromosomes during cell division—become unstable in certain conditions where the process is askew, such as cancer.

“It has been thought that DNA recombination is largely silent at the centromere, but our study indicates that it can be much more active under certain pathological conditions,” says Hironori Funabiki, head of the Laboratory of Chromosome and Cell Biology. “We now understand that we don’t normally observe DNA exchange here because there is an active machinery preventing it.”

The centromere is where freshly duplicated chromosomes are held together during cell division, and where fibers attach to the chromosomes in order to rip them apart as the cell splits into two. The DNA within a centromere repeats itself, with similar stretches of DNA occurring one after the next. The repetitive nature of the centromere is common, from fungi to plants and animals, but it has not been clear why centromeres are composed of repetitive DNAs, or how this repetitive organization could be destabilized.

The researchers looked at a situation where more genetic shuffling than usual might occur: cancer cells. To measure recombination, they adapted a technique frequently used by Rockefeller’s Titia de Lange, who studies a different region of DNA with repeats called the telomere, which protects the ends of DNA from deteriorating.

The method, called CO-FISH, involves marking parent DNA strands and their daughter strands with different colors. If there is an exchange of DNA between chromosomes during cell division, the resulting centromeres display a mix of colors, which can then be quantified.

Another situation where the researchers suspected centromere integrity may be altered was in cellular senescence, a state in which cells have stopped dividing. This process is thought to reflect events occurring as an organism ages and is controlled in part by the telomere, which shortens with each cell division. The researchers found that like telomeres, centromeres also become destabilized in cells undergoing senescence.

Within the cancer cell lines that showed compromised centromere stability, Funabiki and Giunta found that a molecule called centromere protein A (CENP-A) was present on chromosomes in lower levels than normal. CENP-A has been identified as a factor that directly associates with centromeric repetitive DNAs and helps recruit the necessary components that enable chromosomes to equally segregate to dividing cells.

“We depleted CENP-A in normal cells, and the effect was really dramatic,” says Funabiki. “The majority of chromosomes showed extensive exchange.”

With CENP-A and its downstream proteins established as key players in maintaining the repetitive nature of centromere sequences, the researchers have started exploring how it accomplishes this task. They hope further research will shed light on what the consequences of unstable centromeres are in situations such as aging and cancer development.