SPR arises when photons are reflected from a conducting film at the interface between two media of different refractive indices. This phenomenon can be utilized by measuring a change in the angle of reflection of polarized near infra-red light on a gold surface, which occurs when the index of refraction of the surface changes. The Bio-Rad ProteOn XPR36 instrument is used to measure biomolecular interactions, specifically the association rate and dissociation rate of analytes from a biomolecule immobilized on one side of a gold film. In the instrument, light is reflected on the opposite side of a gold film to excite the surface plasmons, that is, the oscillations of free electrons propagating along the film’s surface. The angle of reflection of polarized light reflecting off this surface is measured. When the immobilized biomolecules are bound by their ligands, an alteration in surface plasmons on the opposite side of the film is created that is directly proportional to the change in bound, or absorbed, mass. 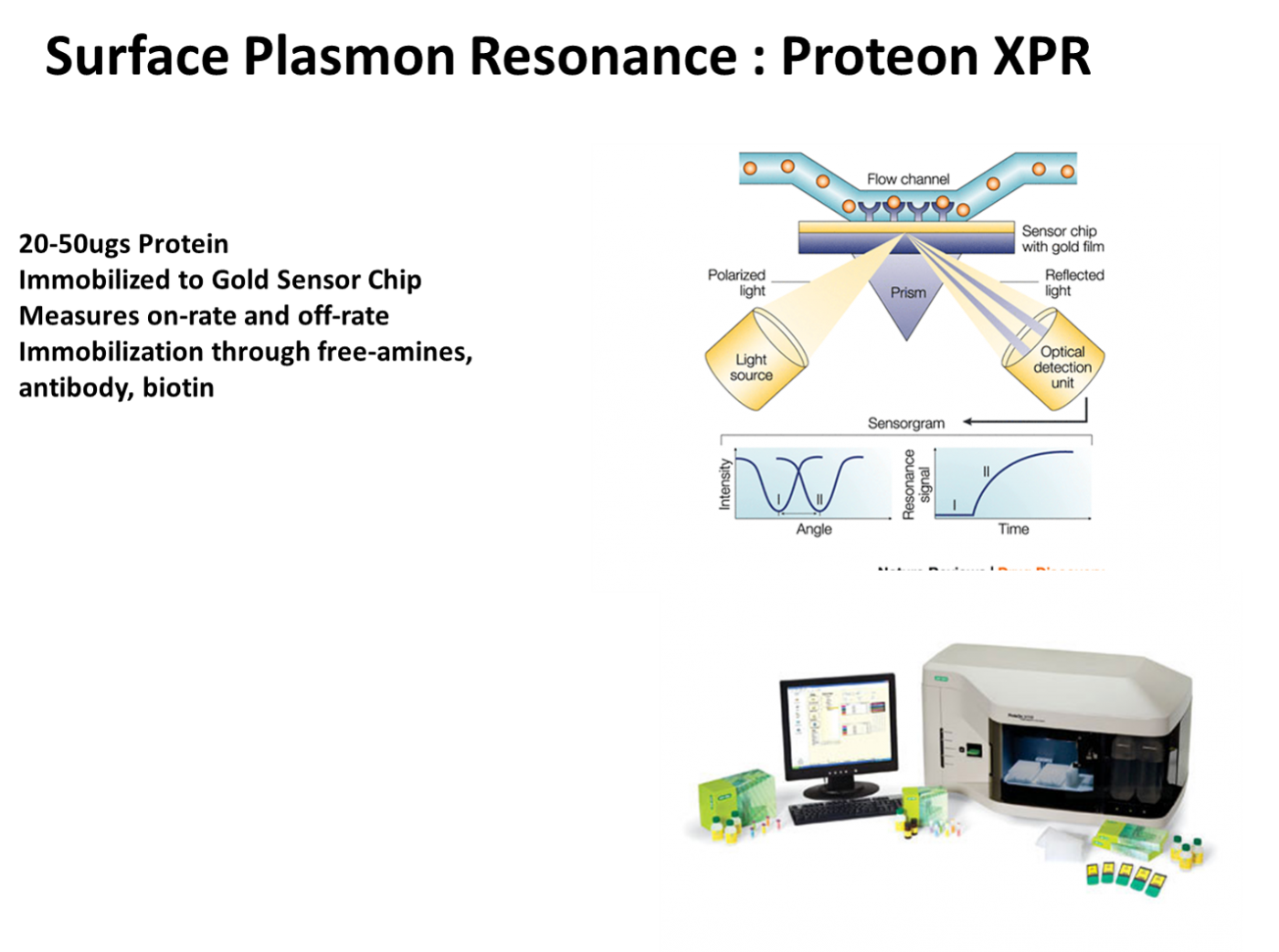 The technique of microscale thermophoresis allows for the detection of conformational changes in molecules that can be a consequence of binding, aggregation or polymerization, provided the change results in a change in mass, charge or solvation shell. The approach is well-suited for measuring equilibrium binding affinities. The technique requires the presence of a fluorophore and can be accomplished with small samples of analyte (8 uL). The HTSRC hosts a NanoTemper MST monolith 115 and a Dianthus instrument.  These are useful for many types of experiments, including microplate based testing for  small-molecule/target and antibody/epitope interactions. 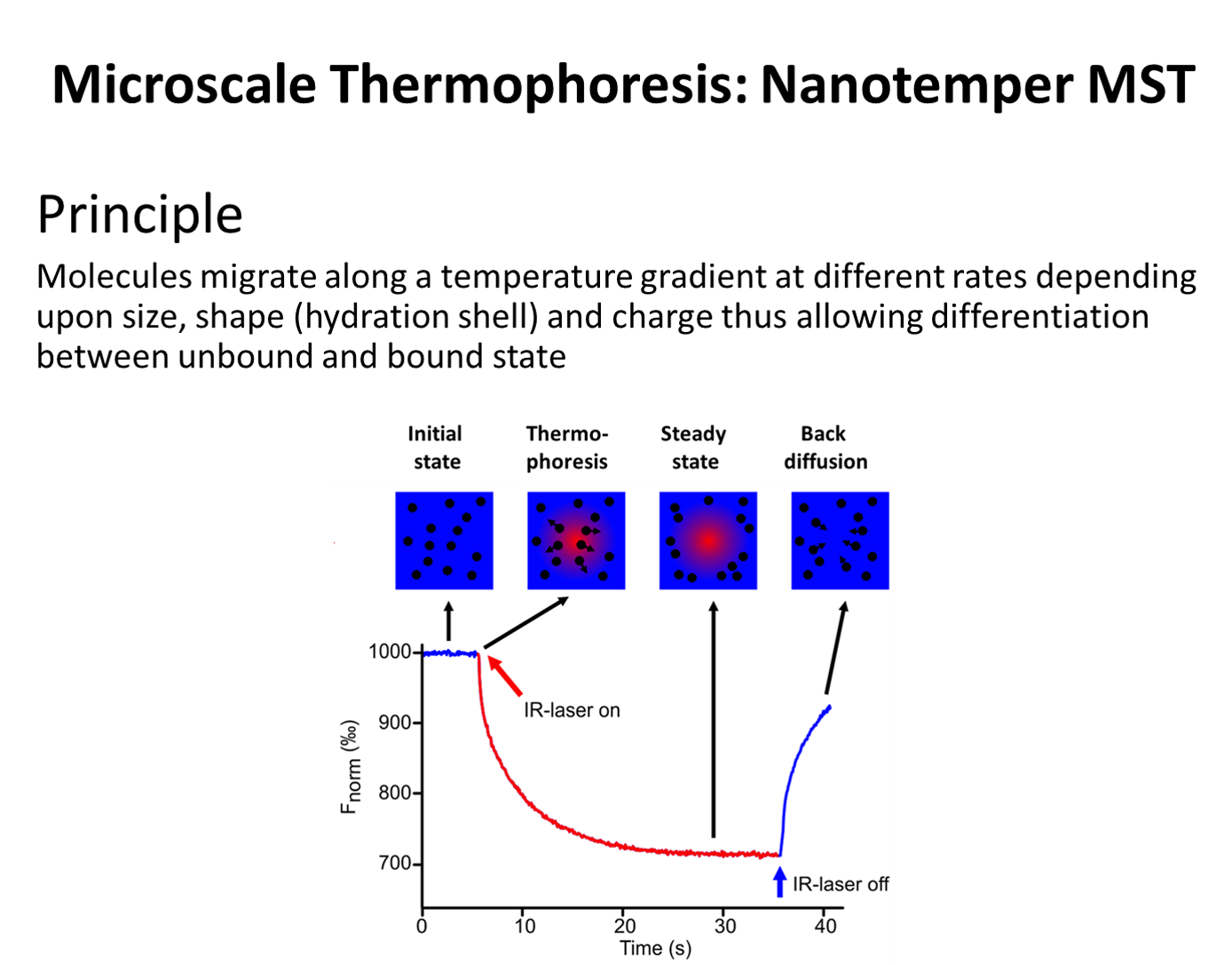 Circular dichroism (CD) spectrometry measures very small differences in the absorption of right- and left-circularly polarized photons. This differential absorption correlates with the phenomenon of chirality. Changes in the CD spectrum correlate with protein secondary structure such as alpha-helixes or beta-sheets. Thus, CD spectrometry can be used to monitor changes in the secondary structure of biomolecules that possess chiral centers.

The HTSRC has an Applied Photophysics Chriascan V-100 Circular Dichroism Spectrometer equipped with a heat ramp which allows us to monitor spectral changes during unfolding. We can provide guidance and training for its use, particularly in quality control studies or measuring sample variation due to ligand binding.

The University is a member of the New York Structural Biology Center (NYSBC) and our researchers can access the NYBSC’s instruments and support.

The HTSRC hosts a Wyatt dynapro plate reader which is a high-throughput dynamic light scattering instrument. The system can read 384-well plates and is ideally suited for measuring aggregation and solubility (average particle size) of small molecules and biomolecules. We routinely use this to test all of our screening hits as a quality control measure to ensure that the compounds are soluble at the concentration needed for the assay, and to ensure that there are no compound mediated protein aggregation artifacts. The instrument also can be used for polymerization dynamics. 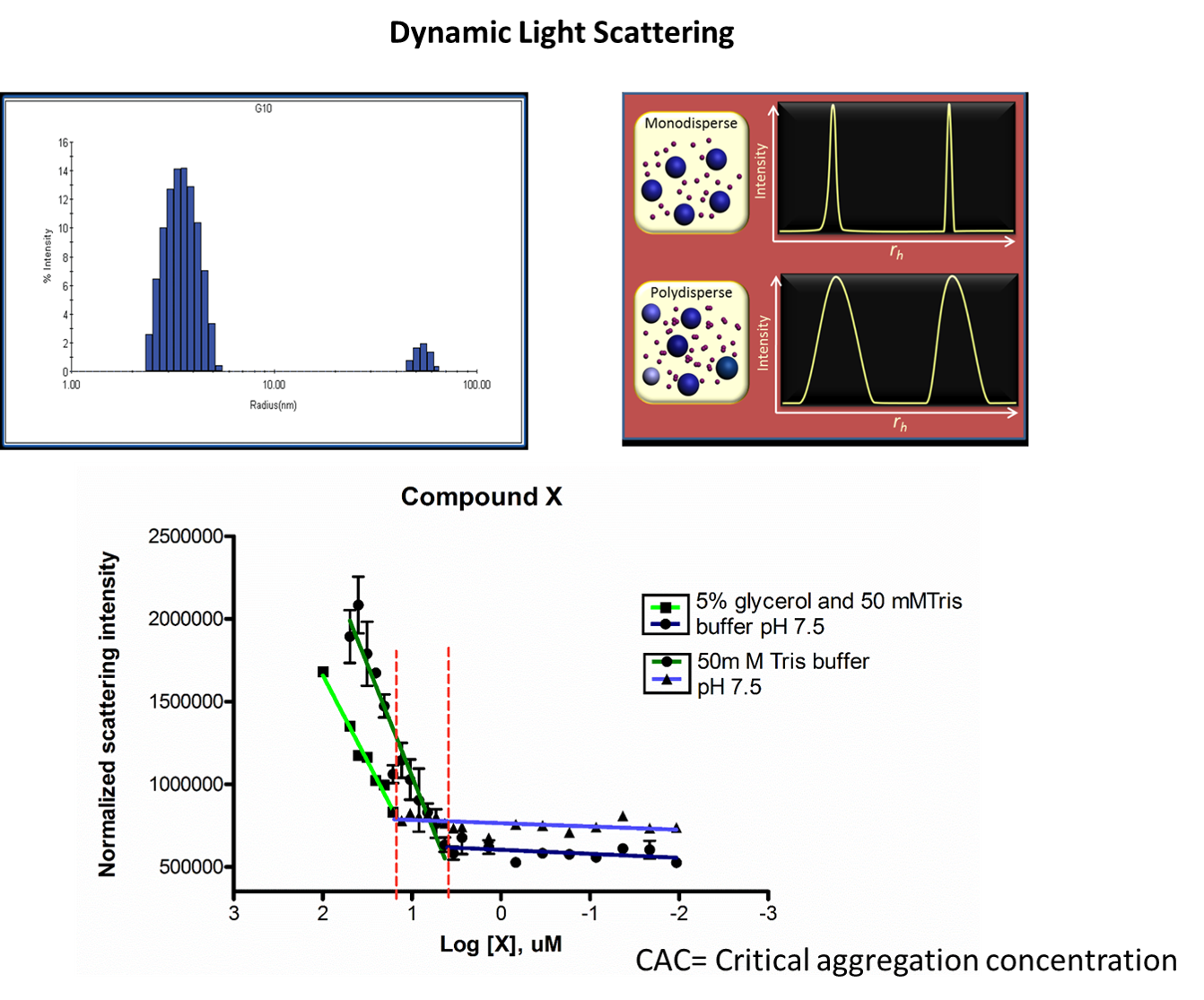 Differential Scanning Fluorimetry, also known as thermal melt analysis (TMA) is a technique which can be used to measure the binding affinity of small molecules to proteins. The instrument we support is called the Bio-Rad CFX 96. Similar to qPCR, the instrument generates a thermal ramp in the presence of an environmentally sensitive fluorescent dye on 96-well plates simultaneously measuring the changes in fluorescence intensity of the sample, which contains a mixture of protein and ligand. A shift in the melting curve happens when the protein is bound to a ligand. The melting temperature dependence on ligand concentration can be fit to derive an affinity constant or Kd.

If you are interested in setting up an HTS/drug discovery project or utilizing our spectroscopic/liquid dispensing instruments please contact htsrc@rockefeller.edu. Assay development and screening typically require a significant financial and time commitment and advance discussions are needed to prepare for the project. This resource center is a shared facility supported by Weill-Cornell Medical College and Rockefeller University, and we welcome clients from those institutions. Due to a high demand for our services, we can accept projects from outside institutions only on a case-by-case basis.  The HTSRC does not currently support research in conjunction with for-profit entities.