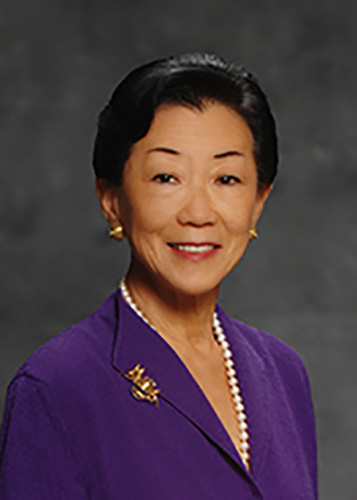 Lulu Chow Wang is the living embodiment of the power of hard work, perseverance, and integrity. A pioneer in the financial world, she has used her tremendous intelligence, determination, and resilience to establish an extremely successful career in a male-dominated industry. Widely recognized for changing the landscape of Wall Street, Ms. Wang has similarly forged new paths in philanthropy, urging women to assume leadership positions in the organizations they choose to support. Her mentorship of women in all areas of her life has created a legacy that will endure for generations.

Ms. Wang’s father was a senior member of the Chinese Nationalists and though the family’s roots were in Shanghai, his work took the Chow family to New Delhi, at the time when Ms. Wang was born. She came to the U.S. with her family when she was four years old. After attending high school in Long Island, Ms. Wang joined the Class of 1966 at Wellesley College, where she gained a deep respect for the transformative power of women’s education.

After her marriage to Anthony “Tony” Wang, Ms. Wang initially stayed at home, but missed the intellectual challenge she had experienced at Wellesley. She found a position as a writer in a securities firm, but soon realized how much more she enjoyed investing and began to train to become a securities analyst, subsequently earning her M.B.A. at Columbia Business School.

Ms. Wang has dedicated a large portion of her time and expertise to public service. She serves as trustee and vice chair of the Asia Society and is a member of the board of Columbia Business School. She is a trustee emerita of The Rockefeller University, The Metropolitan Museum of Art, and Wellesley College, and director emerita of New York Public Radio.

As a Rockefeller University trustee, Ms. Wang has served on the board’s Executive, Hospital, and Investment Committees, as well as the Nominating and Governance Committee, which she chaired from 2013 to 2020. Under her chairmanship, 21 trustees were elected to the University’s board. Ms. Wang is also a leader in Rockefeller’s Women & Science initiative.